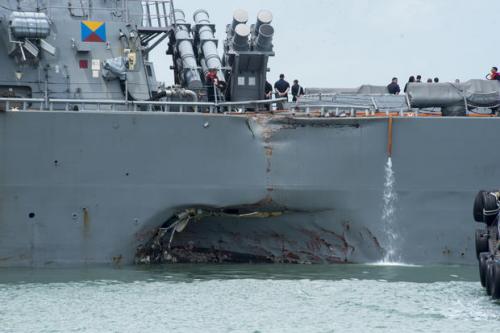 Following the second collision of US warships in two months, the US Navy’s Chief of Naval Operations (CNO) has calling for a comprehensive review of recent incidents in the Pacific in the wake of the USS John McCain collision with an oil tanker early Monday morning. In a video, Chief of Naval Operations Adm. John Richardson called for an “operational pause” with commands and leaders across the fleet, and a deeper look into the training and certification of forces operating in  the Navy’s 7th Fleet – those in and around Japan.

“I have directed fleet commanders to immediately conduct an operational pause with commands and leaders across the fleet, to ensure we are taking all appropriate immediate measures to enhance the Navy’s safe and effective operation around the world…. This is the second major collision in the last three months, and is the latest in a series of major incidents, particularly in the Pacific theater,” said Richardson. “This trend demands more forceful action.”

That review “will examine the process by which we train and certify our forward deployed forces in Japan to be ready for operations and war,” according to Richardson. “This will include, but not be limited to, trends in operational tempo, performance, maintenance, equipment and personnel. It will also focus on surface warfare training and career development, including tactical and navigational proficiency.”

According to CBS, the investigative team will be diverse, including people from across the Navy (both officer and enlisted), and experts from outside the Navy and the private sector.

As shown earlier, the USS John S. McCain suffered extensive hull damage after colliding with the oil/chemical tanker called the Alnic MC. Five sailors were injured and another 10 remain missing.

Richardson noted that the review, led by Adm. Phil Davidson, Commander of the U.S. Fleet Forces Command, will be on a “tight timeline” in order to address the problems and “quickly make corrective actions.”

Earlier at a briefing in Amman, Jordan, Defense Secretary James Mattis offered his thoughts and prayers to the sailors and families of those on board the USS John McCain, saying an investigation is currently underway to determine what exactly happened and caused the crash.  Mattis added the CNO’s broader investigation will put together an inquiry into all related accidents incidents at sea to address all existing factors, including the USS Fitzgerald.

“He has put together a broader inquiry to look into these incidents and to determine any of the causal factors to determine what’s going on,” Defense Secretary James Mattis told reporters while traveling in Amman, Jordan.

Meanwhile, courtesy of Bloomberg, the historical movement of both the USS John S. McCain and the Alnic MC tanker was revealed, swowing both the path of both ships as they ultimately collided just east of Singapore.