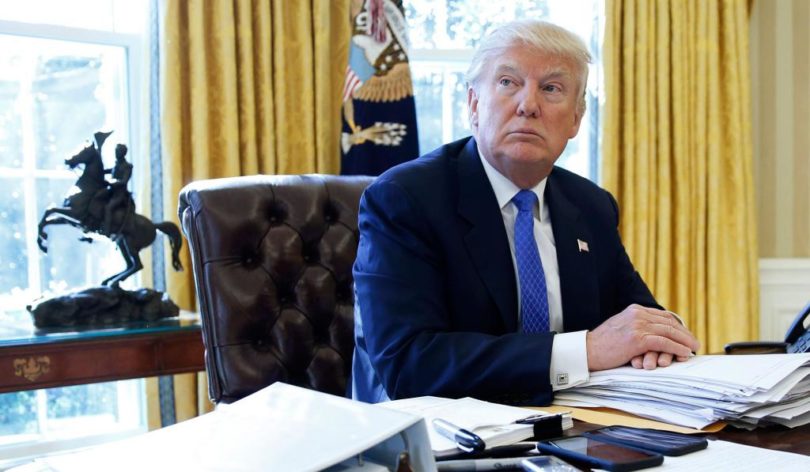 President Trump’s Signing Statement makes clear he regards sanctions law as unconstitutional and will challenge it in the Supreme Court rather than have his veto overridden and risk impeachment by trying to veto it.

Yesterday I wrote an article for The Duran in which I expressed the view that the Presidential Statement published in connection with US President Trump’s signing of the new sanctions law passed against his wishes by the US Congress clearly pointed to an intention to bring a future challenge against the sanctions law to the US Supreme Court.

The person known as Simon has pointed out on the thread of this article that President Trump’s Signing Statement – the one which is actually attached to the law itself – goes much further, and not only details where the President’s lawyers – which in this case means the White House’s Legal Counsel and the Department of Justice – think the sanctions law falls into outright illegality, but makes the intention to bring a challenge to the US Supreme Court crystal clear.

That this document is drafted by lawyers is obvious from the careful use of legal citations.   The key words are the ones I have highlighted and they make the President’s legal strategy – or rather the strategy of his lawyers – completely clear.

However if the Congress uses this unconstitutional procedure to block actions by the President which have the support of the US business community and of the US’s European allies – such as the lifting of sanctions against Russia – or attempts to meddle in the President’s administration of the law, then the President is clearly reserving his right to challenge these unconstitutional provisions in the US Supreme Court on the grounds that they are preventing him from exercising his constitutional duty to manage the nation’s foreign policy.

No one should be in any doubt that in such a situation the President will exercise his right to make his challenge to the US Supreme Court, and on the strength of the legal citations that are carefully set out in the Signing Statement he appears to have an overwhelmingly strong case and can be confident that the US Supreme Court will set the offending provisions aside.

This is a legally and politically astute strategy.

The alternative – vetoing the bill, either by positively vetoing it or by refusing to sign it (a pocket veto) – would have set the President up for a direct clash with Congress on an issue where he has no support in Congress.

Not only would his veto have been overridden but there is a strongly likelihood in that case that articles of impeachment would have been brought forward.

Whilst the President would have been doing nothing more than exercise his constitutional right if he had sought to veto the law, impeachment is decided purely by Congress and it is Congress alone which decides whether the grounds for impeachment have been made out.  The courts have no say in the matter.

With the President totally isolated in Congress his opponents would be in a position to say that by vetoing the law the President was obstructing action by Congress to protect the integrity of the US electoral process from interference by Russia, and that he was therefore guilty of committing a “high crime or misdemeanour” by preventing action against Russia, the US’s main international adversary, on an issue of fundamental importance to the US.  On those grounds they would say that he should be impeached and removed from office.

Since the Constitution does not say what a “high crime or misdemeanour” is and leaves the definition entirely to Congress, it is not impossible that in the present hysterical atmosphere the President’s constitutional use of his veto to block an unconstitutional sanctions law could be successfully misdefined in that way, and that Congress would accept this mis-definition and would vote for impeachment on that basis.

Perhaps enough Republicans in Congress would rally to the President to prevent impeachment taking place, but with Congress practically unanimous in supporting the sanctions law it would be foolish to count on it.

As to those who say that it is inconceivable that a Republican dominated Congress would impeach a Republican President, to my mind that overlooks the fact that if Trump ever were impeached the person who would replace him as President is Vice-President Pence, who is not only a Republican but who is clearly much closer to the Congressional leadership of the Republican Party than Donald Trump is.

Indeed the more I think about this bizarre sanctions law the more I wonder whether the impeachment scenario I have just outlined may have been the very scenario that it was intended to engineer.

In other words the sanctions law may have been put together by the President’s opponents in Congress – who include Republicans as well as Democrats – with the actual intention of provoking him into vetoing it so as to set up the conditions for his impeachment by Congress on an issue where Congress is united against him.

If so then the President – heeding the advice of his lawyers – has sidestepped the trap whilst putting himself in a strong position to challenge the law in the US Supreme Court when the right moment comes.