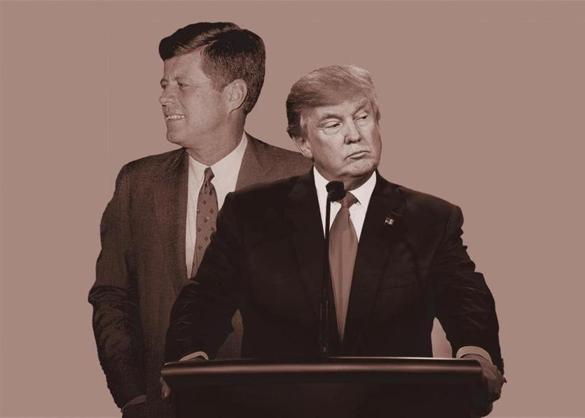 Not even President Kennedy came close to the utter destruction of Deep State’s phony façade that Trump has relentlessly inflicted.

President John F. Kennedy was literally the smartest guy in the room.  Everyone knew that and took his words very seriously.  So, when he spoke about secret societies, who didn’t listen… very closely?  When JFK vowed to“splinter the CIA into a thousand pieces and scatter it into the winds”[1] who didn’t take him seriously?

These and other extremely courageous actions by Kennedy are what sealed his fate in Dallas on November 22, 1963.

President Donald J. Trump is also the smartest guy on the block, yet in his own very unique way.  He has street smarts that Kennedy lacked.  But what Trump really has going for him is his confounding and unpredictable persona.  His hard New York City edge and inimitable moxie only add to the mix.

However, Trump’s greatest strength is that even he doesn’t know what he’s going to do next.  And the establishment absolutely hates that.  TPTB thrive on always exerting absolute control … over everything, everywhere, all the time.  Their myriad MOs all revolve around maintaining ironclad control across the planet.  The following article explains how agents of Deep State are now attempting to put Trump in an information bubble.

Trump Put Into Data Cocoon, COS Exerts Total Control Over All Info Going To Oval Office

Nonetheless, with President Trump you have the legendary skunk at the garden party. Can there be a more disruptive and offensive presidential mantra than “fake news”?   What more powerful control mechanism is there than the CIA-owned and -operated mainstream media (MSM)?

While Kennedy went right for the jugular (e.g. the C.I.A., the FED, the MIC), Trump goes after the exposed varicose veins like CNN and MSNBC.  In this way, Trump works the system like a charm, always playing rope a dope with the obvious dopes at CNN.

Kennedy didn’t do that.  He audaciously went after the CIA Director and summarily fired him and his deputies.

What’s the point?  These two monumental change agents have similar yet quite different destinies.

Kennedy’s destiny set him up to be a sacrificial lamb.  As a modern-day prophet, President Kennedy spoke truth to power like no leader ever did before.  His irresistible charisma and high idealism drew both friend and foe into his orbit forever to be captivated by his truth utterances.  As the original truther, JFK’s assassination actually inaugurated the truth movement.  The presidency of John K. Kennedy was used to awaken the American people as no other president in U.S. history…until now!

Trump’s destiny has set him up to avenge Kennedy’s assassination.  Actually, and much more importantly, Trump’s mission is to rekindle the spirit that Kennedy lit across the USA—the rebirth of the American Republic at a critical time in the nation’s development.  The focused projection of Trump’s extraordinary power and influence is more necessary than ever if this country is to be saved from itself.  However, it is the Trump movement that must ultimately do the job of taking back the country from those who have hijacked it.

Key Point: Where Kennedy was John the Baptist, Trump is you know who.
Except that his public scourging and crucifixion are being done daily to his character and reputation, not his body.