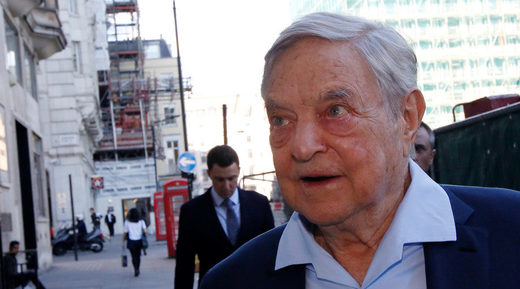 US regulatory filings show George Soros is still investing in options that will profit him only if the stock market they are linked to declines in value.

Soros Fund Management held put options on PowerShares QQQ Trust, SPDR S&P 500 ETF, iShares Russell 2000 ETF as of June 30. Each is an exchange-traded fund that tracks a broad US stock market index. The bet is worth $1.8 billion. Soros stands to profit only if the stock market falls.

Michael Vachon, a spokesman for Soros Fund Management, said the company would not comment on the filing.

In January, Soros said “it’s impossible to predict” US President Donald Trump’s actions, but he was nonetheless sure the market would plunge.

Soon after the election, Soros lost over $1 billion by taking a short position on the market. While Soros called Trump a “would-be dictator,” and predicted uncertainty and a sell-off after his win, the markets have rallied significantly.

Soros is best known for making a fortune on his short play against the British pound. On 16 September 1992, Soros’ $10 billion short position on the pound forced the Bank of England to withdraw Sterling from the European Exchange Rate Mechanism (ERM) after it was unable to keep the currency above its agreed lower limit in the ERM.