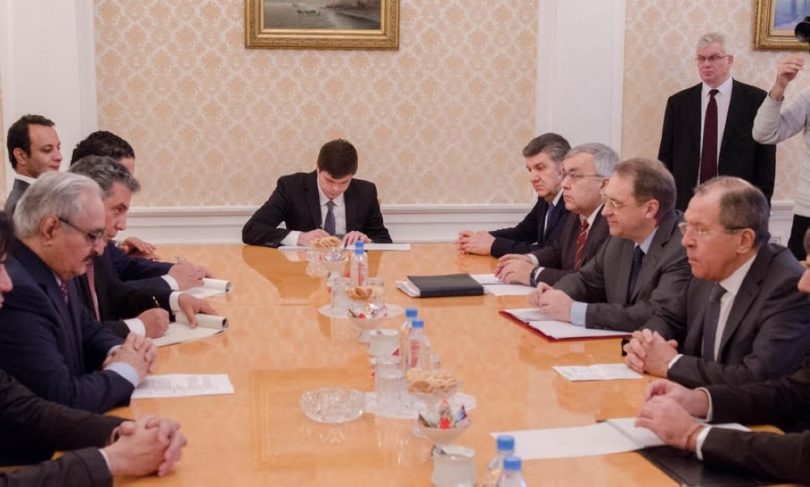 The leader of the Libyan National Army, Khalifa Haftar is to meet with Russia’s Foreign Minister Sergey Lavrov on Monday to discuss growing relations between the secular Libyan House of Representatives and Russia.

The failed state of Libya is making baby steps towards becoming less fractured as it becomes clear that the only force currently operating in Libya with the ability to re-establish law and order in the country is that led by Haftar.

After years of total oblivion in Libya, 2016 saw the rise of Field Marshall Khalifa Haftar, a former officer of the The Great Socialist People’s Libyan Arab Jamahiriya (Gaddafi’s post 1977 Libyan state). Haftar had relocated to the United States after falling out with Gaddafi in 1990. In spite of having relations with both Gaddafi’s state and the United States, many welcomed Haftar back as he was seen as having experience and real credentials in a country whose self-proclaimed leaders frequently lack both.

Haftar’s loyalty lies with the Libyan House of Representatives, one of Libya’s competing governments which is based in the city of Tobruk near the Egyptian border. Haftar’s leadership of the Libyan National Army which is loyal to the Tobruk government has recently scored major gains against jihadist factions.

The infamous city of Benghazi was recently liberated from jihadists by the Libyan National Army, something which clearly puts Haftar in a position of strength at the negotiating table.

With the backing of the Arab state which has always had the most vested interests in Libya, Egypt, Haftar is clearly in a position where he is respected not only in many parts of Libya but in the wider Arab world. Hafter’s forces for example, cooperated with Egypt during an anti-terrorist bombing campaign by the Egyptian Air Force on Libyan soil.

Haftar’s partnership with Egypt has de-facto earned him credibility in the UAE which openly supports the Tobruk government and one might also say in Saudi Arabia which remains more subdued on the matter. Even though Libya’s once thriving economy remains in tatters, the Libyan House of Representatives supported the Saudi/UAE/Egyptian/Bahraini position against Qatar in a symbolic showing of unity. While Russia has not formally endorsed the Libyan House of Representatives, Haftar has travelled to Moscow and is generally seen as enjoying good relations with Russian officials.

By contrast, the western backed Government of National Accord in Tripoli led by Fayez al-Sarraj can barely control its own capital. The GNA has recently faced opposition from not only local and international terrorist groups but from the National Salvation Government, another Tripoli based faction which claims to be Libya’s legitimate government.

The GNA has often had to rely on support from militants (some would say terrorists) based in  Misrata who are backed by Turkey and Qatar, thus putting that government at odds with Egypt which continues to boycott Qatar and have poor relations with Turkey over Ankara’s support of the once again outlawed Muslim Brotherhood which briefly formed an extremist regime in Cairo between 2012 and 2013.

While the west continues to back the GNA, the GNA has proved itself to be inadequate even by its own standards. By contrast, the Tobruk government and its associated Libyan National Army is for all intents and purposes, the only force in Libya which can call itself legitimate. Its secular style of rule has also attracted support from some former supports of the secular Jamahiriya.