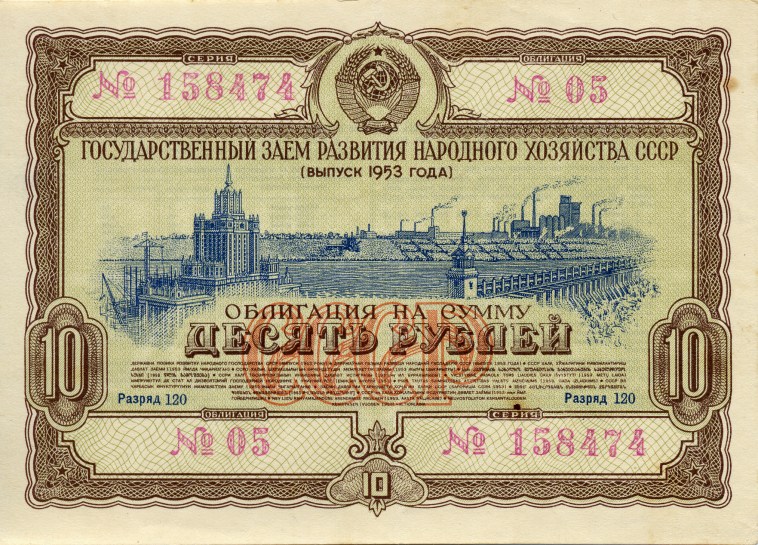 Payment of $152 million to Bosnia clears all outstanding Soviet debt

An aspect of the events surrounding the dissolution of the USSR in 1991 which rarely gets discussed is that Russia took on itself the entire burden of paying the whole of the foreign debt owed by the USSR at the time of its collapse.

By contrast the other fourteen Soviet republics – now all of them independent states – were not required to pay any of this debt when the USSR collapsed.

The result was that from the moment it came into existence Russia found itself liable for the entire burden of the USSR’s debt – estimated to be around $70 billion – with just a few billion dollars held in the Russian Central Bank’s gold and foreign currency reserves to cover it.

By contrast the other republics of the USSR when they became independent found themselves entirely debt free.

Needless to say any comparison of the relative economic performance of Russia and of the other former Soviet republics since 1991 ought to take this fact into account.  Needless to say it never is.

In the event Russia has successfully discharged the whole of this huge Soviet debt burden it took on itself, steadily paying off all the USSR’s debt ever since Vladimir Putin became Russia’s President in 2000.

The final payment of $152 million to Bosnia has just been made, clearing the debt completely.

Following this payment the only bilateral debt Russia stills owes to another sovereign state is $594 million, which Russia itself borrowed from South Korea, and which it it due to repay in 2025.

The payment to Bosnia shows something else: Russia’s determination to discharge all its financial obligations even when it has an excuse not to do so.

At the time the USSR incurred the debt of $152 million which has just been paid to Bosnia, Bosnia as an independent country did not exist.  The USSR did not in fact owe this money to Bosnia but to the Socialist Federation of Yugoslavia, of which Bosnia was a constituent republic.  Yugoslavia however no longer exists, just as the USSR itself no longer exists.

Another country in Russia’s position might have chosen to treat Yugoslavia’s disappearance as a reason for claiming that the debt which was owed by the USSR to Yugoslavia had also been wiped out.

The two final payments were a payment of $60 million to Macedonia made in February, and the payment of $152 million which has just been made – on 8th August 2017 – to Bosnia.

The collapse in oil prices in 2014 and the sanctions imposed on Russia that year were supposed to precipitate a payments’ crisis in Russia, with claims often made at the time that the country would be pushed into crisis and default.

Instead Russia has effortlessly paid off all its Soviet era debt, has Central Bank foreign currency reserves that now amount to $420 billion, is currently running a surplus on its consolidated budget, and has a public debt to GDP ratio of less than 15%, the lowest of any G20 state.

Moreover it seems that most of the foreign debt owed by Russia’s companies to Western banks will also be paid off by the end of this year.