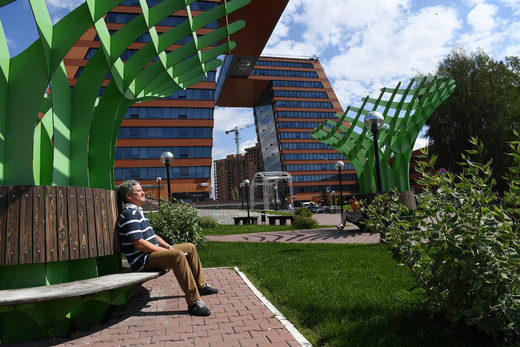 Russia is BAD we are told on a daily base. It is hacking U.S. elections it is claimed, even when the evidence says it did not do so. The public is only mildly convinced by the anti-Russian propaganda campaign.

The new way to vilify Russia must then proceed on a different route. “Yes, Russia is capitalist, but it is capitalist in a bad way.” Thus we get this NYT headline and story: Russia Wants Innovation, but It’s Arresting Its Innovators:

AKADEMGORODOK, Russia – Dmitri Trubitsyn is a young physicist-entrepreneur with a patriotic reputation, seen in this part of Siberia as an exemplar of the talents, dedication and enterprise that President Vladimir V. Putin has hailed as vital for Russia’s future economic health.

Yet Mr. Trubitsyn faces up to eight years in jail after a recent raid on his home and office here in Akademgorodok, a Soviet-era sanctuary of scientific research that was supposed to showcase how Mr. Putin’s Russia can harness its abundance of talent to create a modern economy.

A court last Thursday extended Mr. Trubitsyn’s house arrest until at least October, which bars him from leaving his apartment or communicating with anyone other than his immediate family.

Noticed how bad Putin is? How very authoritarian his government thugs are? They even arrest an “entrepreneur with a patriotic reputation”!

But why is the man in front of a court?

Mr. Trubitsyn, 36, whose company, Tion, manufactures high-tech air-purification systems for homes and hospitals, is accused of risking the lives of hospital patients, and trying to lift profits, by upgrading the purifiers so they would consume less electricity.

Most important, he is accused of doing this without state regulators certifying the changes.

“Upgrading” something so “it consumes less electricity” is of course good. We all know this.

Ten paragraphs follow to further convince us that the guy is really on the good side and that Putin led Russia is bad, bad, bad.

Only then do we learn what Trubitsyn’s company really did:

[Chief technical officer] Amelkin said the company was approached by the regulatory agency and said that it had changed its design and removed a supplementary filtering device that laboratory tests had shown was redundant and wasted electricity. The company then amended its registration documents and thought the matter was over, Mr. Amelkin said.

So here is what really happened. The company produces licensed medical filter equipment. It eliminated one stage of the expensive filters and sold the degraded equipment without telling anyone about the change.

Yes, the modified equipment does “consume less electricity”. It does so because it filters less than it is supposed to do. The degraded and cheaper produced medical product was sold without a valid license. Finally some of the companies competitors noticed this and informed the regulators about the dangerous fraud. The “Innovator” CEO of the company was arrested for fraud and will have to go to jail.

That all seems very normal to me and the way product regulation should work. When some German car manufacturers cheated with diesel emission tests their U.S. competitors complained and the regulator put some company officials to jail. That was lauded, even in the NYT, as good regulation. But when Russia does the very same it is defamed as stifling innovation.

Propaganda works. The author of the NYT piece managed to convince his readers. Of the current 29 “Reader recommended” comments 28 are negative towards Russia. Only one commentator, from Vancouver, points out that the system worked as it is supposed to work everywhere. That the company was penalized for a fraudulent product and the responsible manager punished.

One wonders how the author of the piece, and his Russia bashing readers, would feel about insufficiently filtered air when they lie in intensive care.