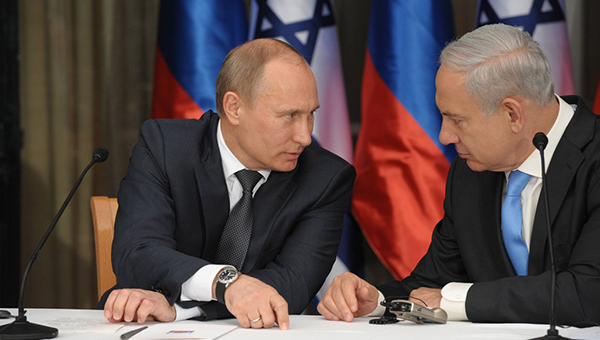 Benjamin Netanyahu is really desperate. He knows that Israel obviously lost the Syrian war. For more than five years, the Israeli regime used all kinds of diabolical strategies to remove Assad from power. They even admitted openly that they preferred terrorist cells in Syria over the Assad government.[1] As Israeli ambassador Michael Oren put it then:

If bad guys aren’t a problem at all, then lying to the West with respect to the situation in Syria was a small price to pay. And the Israeli regime did exactly that for years.

Yet despite all their political propaganda and maneuvering, Assad thrived and survived the Israeli onslaught. Netanyahu was humiliated. He is now desperately trying to redeem himself by coming up with implausible scenarios. He has recently told Putin:

“Iran is already well on its way to controlling Iraq, Yemen and to a large extent is already in practice in control of Lebanon. We cannot forget for a single minute that Iran threatens every day to annihilate Israel. Israel opposes Iran’s continued entrenchment in Syria. We will be sure to defend ourselves with all means against this and any threat.”[3]

Putin was probably yarning when the mad man in Tel Aviv made that statement. Netanyahu obviously knows that it was largely Russia that destroyed the Israeli plan in Syria. In fact, when the Israeli regime was summoning one lie after another, including the chemical weapon nonsense, it was Russia that always stood up and presented serious evidence to the contrary.

And now Netanyahu is saying to Netanyahu that “Iran threatens every day to annihilate Israel.” This man has been living in a fantasy world since ascended to the Zionist throne in Israel, and he doesn’t want to come back to the real world at all. This is again Netanyahu:

“I made it clear to Putin that Iran’s establishing itself in Syria will not aid stability in the region, and I told him that we want to prevent a future war and therefore it is important to warn in advance.”[4]

Iran, with the help of Russia, has been annihilating terrorist cells in Syria.[5] In fact, Iran even fought against ISIS in Iraq. The U.S. government and even the Zionist media knew this.[6] And now mad man from Tel Aviv is saying that Iran is the bad guy?

Former head of the Mossad, Meir Dagan, declared back in 2012 that Iran is “very rational.”[9] If that is the case, then why is Netanyahu saying virtually every month that Iran aspires to annihilate Israel? More importantly, should the West really pay attention to a person like Netanyahu, who has been wrong time and again?