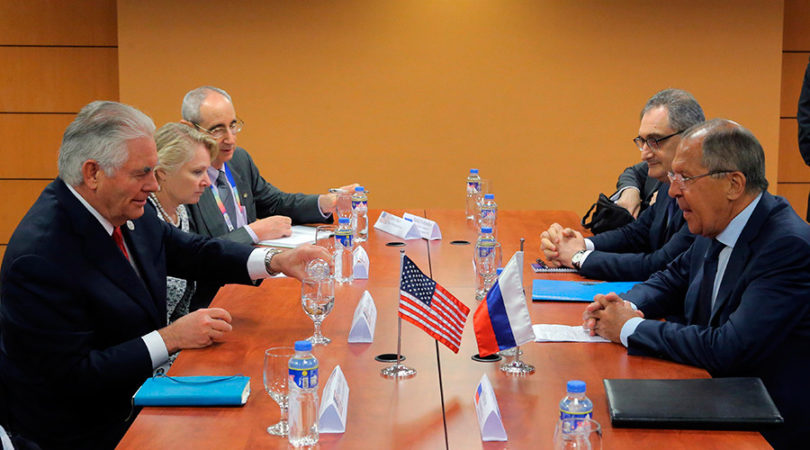 Rex Tillerson and Sergey Lavrov held their first meeting since the US Senate voted to impose new sanctions on Russia, which responded with countermeasures. Lavrov said Moscow is ready for normalized relations if the US “pulls back from confrontation.”

At a meeting on the sidelines of an ASEAN regional security summit in Manila, US Secretary of State Rex Tillerson raised the issue of Moscow’s response to the new round of sanctions, Russian Foreign Minister Sergey Lavrov told reporters on Sunday.

“He was interested, first of all, in the details of those decisions that we had been forced to take in response to the adopted anti-Russian bill passed by the US Congress,” Lavrov said, as quoted by RIA Novosti.

“We gave him the explanations,” Lavrov told reporters following the meeting.

“Lavrov pointed out that the US law on sanctions against Russia has become another link in the chain of steps unfriendly and dangerous for international stability, striking a powerful blow to the prospects for bilateral cooperation,” the Russian Foreign Ministry said in a statement, published on its website on Sunday.

“Naturally, such actions, including the illegal retention of our diplomatic property since December of last year, could not remain unanswered, and won’t be in the future. At the same time, we are ready to normalize our dialogue if Washington pulls back from confrontation,” the statement reads.

“He said it all there, explaining the reasons behind the decisions we made after long expectations that the US would not follow the path of confrontation,” Lavrov said.

“But, unfortunately, the Russophobic attitude of the members of the Congress prevented this from happening,” he said, as cited by Interfax.

Lavrov and Tillerson exchanged greetings and said a few words about their schedules for the coming days. After that, the press was asked to retire, but one American journalist managed to ask a question regarding Washington’s new sanctions on Russia. Both senior officials chose to ignore the question, however.

Following the US House of Representatives’ approval of sanctions against Russia, Iran, and North Korea last week, the Russian Foreign Ministry announced on July 28 that Washington must reduce the number of its diplomatic staff in Russia to 455 people.

The US State Department responded to Moscow’s move with regret, saying that it was an “uncalled-for act.”

“They’re certainly attempting to limit [Trump’s] powers, and I think anybody who has watched American politics for the past six or seven months understands the panic that is present in our Congress amongst the opposition party and certain members of his own party. They’re very frightened at his ability and desire to execute power, to use the power of that office,” he said.

The new US sanctions will affect many sides, including the US and Trump, American businessman Paul Goncharoff has warned.

Asked whether Trump was catering to the American public and that they wanted to see him sign these sanctions, Goncharoff told RT that “If that is the case, it is a very sad state of affairs of what is America. It sort of underlines intolerance and lack of desire to get at what the truth is in fact.”