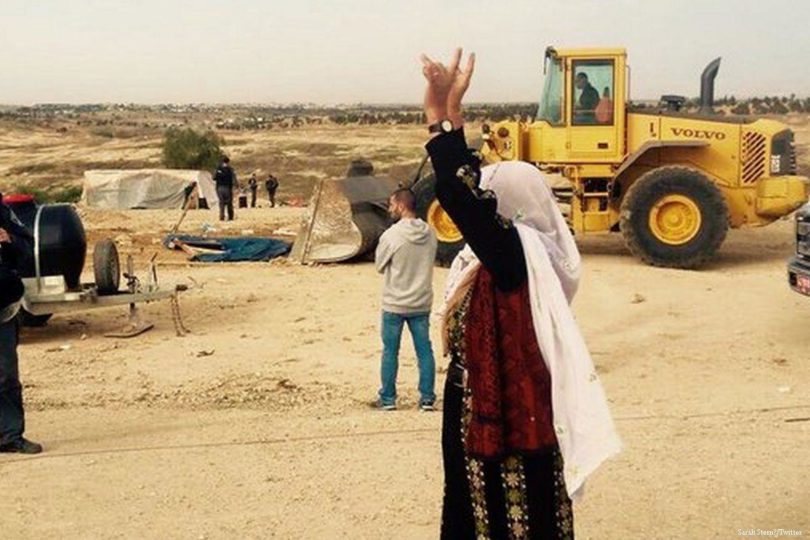 After demolishing a Palestinian village in the Negev, an Israeli court has ordered residents of al-Araqib village to pay the government for the cost of bulldozing their homes. Six residents of the village which is “unrecognized” by the Israeli state in southern Israel have been asked to pay a total of $541,000 for the cumulative cost of destroying their homes 116 times since 2010.

Al-Araqib is just one of 35 other Bedouin Palestinian villages which the Israeli state refuses to recognise and offer any government assistance. According to the Association for Civil Rights in Israel (ACRI), more than half of the approximately 160,000 Bedouins in the Negev reside in “unrecognized villages”.

Despite the fact that these villages are as old as Israel itself and the way of life of the Bedouins stretches much further back, the villages are under constant threat.  Not only are the residents denied basic rights but hundreds of thousands have the constant threat of demolition hanging over their heads.

Having had their homes demolished 116 times, six of the 34 residents who decided to see out the legal proceedings through to the end are now being forced to pay over half a million dollars. Israeli courts have demanded compensation not only for the demolition of the homes but also for the cost of the state lawyers. It’s not yet clear what the penalty will be for the Bedouins if they fail to pay the damages demanded by the state, as is most likely the case.

Representatives of the residents condemning the court’s decision as a double punishment are considering an appeal. “In my opinion, the state demolished the village  in violation of the law, and went one step further to demand compensation for an act that wasn’t legal in the first place”, said attorney Khaled Sawalhi, the legal representative.

Human rights groups have also criticised the move on a number grounds. Haya Noah, director of the Negev Coexistence Forum for Civil Equality, was quoted by Haaretz as being astonished by the court’s decision. Pointing to the fact that demolitions are carried out by units having an annual state budget; he added “there’s no real reason to claim payment”.

Noah also said: “Instead of pushing the residents to the wall, the state must provide shelter for the villagers and stop the campaign of demolitions and harassment.”