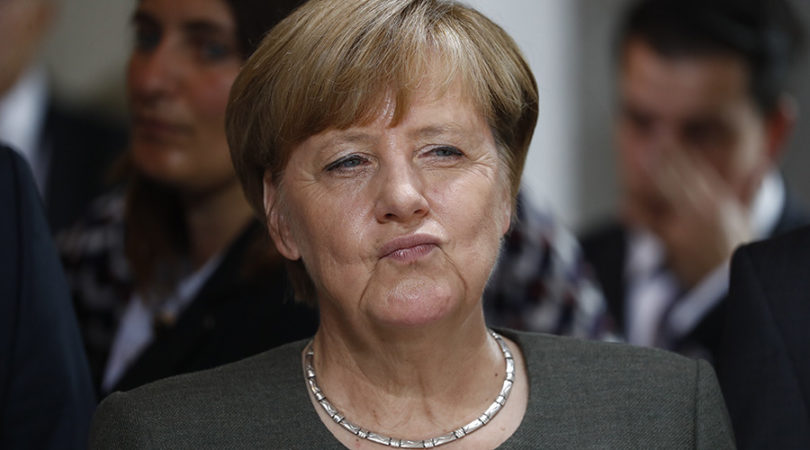 Angela Merkel has done a U-turn on Brexit and is now demanding the UK pay a staggering €100 billion ‘divorce settlement.’ The dirty tricks campaign not only makes the EU look a loser but will create a ‘Dunkirk victory’ for Britain once again.

One must wonder if German leader Angela Merkel has seen the recent blockbuster film, ‘Dunkirk,’ directed by Christopher Nolan, which portrays Britain’s initial defeat at the beginning of WWII?

While the film glosses over one or two historical details, it succeeds in showing how a fortuitous German leader believed he could emerge victorious by isolating British forces on a French beach after retreating from the Wehrmacht’s lightning advance across Europe. The tactic, however, failed to achieve the desired result as the humiliation of Dunkirk only strengthened the morale and febrile determination of those British soldiers to defeat Nazi Germany even more. In addition to attacking Russia, it was a significant tactical error.

Is history repeating itself with Germany’s recent tough stance on Britain and its bid to abandon the EU project? Has Angela Merkel underestimated the resolve of the British?

Looking at Merkel’s recent comments, it’s as though she too, along with a complicit cabal of EU senior officials, are now falling into the ‘Dunkirk trap,’ as Merkel has gone back on her comforting words of just a few months back when she called for a sensible and amicable ‘divorce.’ At the same time, the EU is now showing its true colors by not wanting to negotiate a real Brexit, but a disingenuous one based on stalling any progress which can be made by the British team. The history books will note that making the costs for Britain leaving the EU a top subject to be tackled at the very beginning of the negotiations – the so-called ‘divorce settlement’ – is really a trap, which Britain’s David Davis has fallen into.

Because Brexit has lost its appeal with a small group of voters in the UK who chose ‘leave’ but later, according to a number of media reports, now believe Brexit might not even happen, both Brussels and Merkel appear to now think stalling any progress by London will weaken Theresa May’s government as the UK economy slows and political unrest spikes, against her, in particular. They seem to believe a ‘hard Brexit’ – that is, one which is not agreed on when the talks reach their deadline of March 2019 – will bolster their agenda: to set a very firm example to other euroskeptic countries considering a referendum on membership – like Greece, Portugal, Cyprus, Hungary, Czech Republic, Sweden and Denmark – that the price is too high to contemplate.

As a message to such countries and the rest of Europe in general, it’s a poor one though which makes Brussels look like a loser and a bully. Not exactly a thriving, profitable trading bloc which can break away from the US and determine its own foreign policy with a new army. More a weak, insecure and struggling anachronistic organization that is deeply worried about its survival and is wildly deluded about its importance. Even the UK-EU divorce figure shoots both Merkel and Brussels in the same foot. If Britain is so unimportant how come its leaving the union will hit Brussels so hard? It’s a perverse dichotomy of logic which hasn’t been thought through. Like the euro. Or the EU army. Or the EU’s €1 billion ‘diplomatic’ service.

The EU doesn’t do contingency planning.

Currently, Brussels mandarins are riding high on a feel good wave based on the French presidential election installing their own kind and a recovering euro; the former was a huge boost to a project which before Emmanual Macron, 39, took the Elysee, looked like a plane in a tail spin. But as Macron’s makeup bill soars, while his popularity plummets, the EU elite has gained a little confidence.

But to be fair, Britain’s own politicians’ floundering and buffoonery have also boosted their mojo.

Recently Boris Johnson accepted in principle there would be a payment of some sort to be made for the ‘divorce.’ It was absurd ignorance of him and others about the EU project to not have foreseen this. But there were also other oversights, which the British PM and her ministers should have spotted.

Leading throughout the Brexit campaign much was made of the idea that Brussels would not be so stupid as to give Britain a hard time at the negotiating table, risking losing UK’s €100 billion trade with, in particular, France and Germany. Again, it seems the EU would cut its nose despite its face and that it would probably consider how to use EU cash to compensate German car workers or French wine makers.

But there are other areas of ignorance on the British side. There is their share in the highly profitable European Investment Bank (EIB), which, on paper, is worth about €40 billion – which no British media or politicians wish to talk about, but which could be sold to wreak havoc in Brussels.

This realistically could be offered into the talks, and with some leverage as presumably the EU would try and block the sale of the share. Or insist that it is sold equally to all member states – rather than, say, Germany.

Is it possible that May, Johnson, and Davis simply don’t know about the share?

But if Merkel is really heading this charge against the British, it will be the second time in almost 78 years – albeit under radically different conditions – that Germany has tried to break British resolve. The first time was on the beaches at Dunkirk where Berlin massively underestimated the UK.

If a hard Brexit is what we’re heading for, the EU will be the loser as even if the pound crashes, there will still be a ‘grey market’ of trade between the EU countries and the UK. Plus, a much lower pound would make UK exporting companies way more competitive than their EU competitors and also Foreign Direct Investment (FDI) would flow to the UK like never before.

Even the doomsday scenario the staunchly pro-EU Economist predicts a Britain in a depressing period similar to post-war Britain, but one which is still very much a survivor. And therein lies the problem. The EU cannot afford Britain to come out of a hard Brexit as a survivor as this would send the wrong message to those who are mulling their own exits. It needs Britain’s economy to crash entirely; in other words, to become the basket case economy of Europe.

And this explains the panic of the EU and why the €100 billion divorce is so important. It’s part of what Brussels hopes will be a meltdown, a relentless arduous torture which breaks the soul of the British people. A Dunkirk moment, if you like.

But galvanizing the British people and their resolve is exactly what the EU should avoid. Currently, the country is still divided into two camps: largely those of hard and soft Brexits – the latter not being a full exit from the EU at all, but still one as a periphery member. Simplifying this rationale to a single anti-German or anti-Brussels hatred, brought about by a dirty tricks campaign to destroy the UK economy, will blow up in the face of those who conspire it.

The last thing Brussels wants is a polarized view to emerge in Britain, which sees Germany as a country that once again wishes to defeat Britain. Merkel needs to rethink her Dunkirk plan and consider how the British appear to thrive in a crisis and diligently pull together in wars. Her recent, more aggressive stance against Britain is short-sighted and ill-conceived and resonates from a previous decision made by a German leader who thought he really knew how to put the British in order.

Never before in the Brexit talks has the adage ‘those who cannot remember the past are condemned to repeat it’ applies.