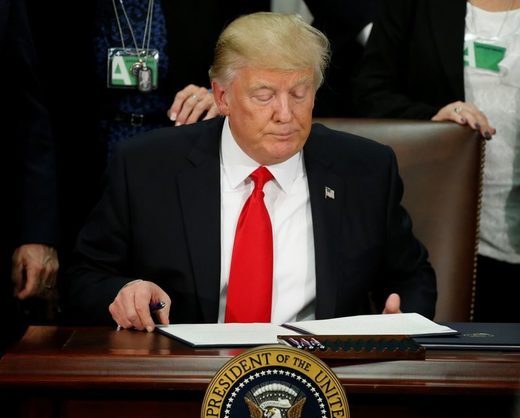 US President Trump has as predicted signed the new sanctions law but he has done so in a most interesting way which suggests that after a rocky couple of weeks he may be rediscovering his political touch.

I share the view that it would have been a serious mistake for President Trump to veto the new sanctions law.  With overwhelming majorities voting for the sanctions law in Congress, his veto would certainly have been overridden and he would have achieved nothing by attempting to exercise his veto other than escalate the political crisis in the US in a way that would have damaged his own authority.

Nor in my opinion was the other option some have suggested – of letting the sanctions law come into effect without appending his signature – been a good one.  It would have made President Trump appear weak and would have exposed to almost as much criticism as an attempt to veto the law would have done.

Instead by signing the law President Trump has been able to make a Presidential Statement which whilst it has enraged his opponents has put him in a stronger position than an attempt to exercise any other option would have done.

The Presidential Statement has clearly been carefully drafted – unquestionably by lawyers – and it is clear from Secretary of State Tillerson’s comments about the sanctions that he was involved in drafting it.  Its text deserves to be set out in full

Note that the Presidential Statement makes no criticism of Russia, refers to no action by Russia that might justify the sanctions, and clearly distinguishes Russia from the two other countries which are being targeted with sanctions – North Korea and Iran – which President Trump clearly considers should be sanctioned.

The single most important comments in the Presidential Statement are those which however clearly say that the sanctions law infringes on the President’s constitutional prerogative to direct the US’s foreign policy.

In doing so the Presidential Statement calls into question the wisdom of the whole measure, for example by worrying that its effect will be to “drive China, Russia, and North Korea much closer together”. It is actually remarkable that Donald Trump – a person wholly inexperienced in exercising public office – seems to be the only prominent public official in the US who worries about this.

It is difficult to see these comments are anything other than preparation for a long term challenge of the measure to the US Supreme Court.  The US Constitution gives Congress the power to regulate commerce with foreign states.  However the President is saying that by seeking to tie his hands Congress is abusing this power and is acting unconstitutionally.

At this point I should say that by signing the law President Trump is not throwing away his right to challenge the constitutional basis of the law in the US Supreme Court at some future time.  The President does not have the power to sign away his rights which are given him by the Constitution.  If the US Supreme Court at some future time decides that the President’s constitutional powers are being infringed by the law, then it will set the offending provisions of the law aside regardless of whether or not the President signed the law.

I am not an expert on US constitutional law.  I cannot say whether or not such a challenge if or more probably when it is brought will succeed.  On balance I suspect it will, and the careful wording of the Presidential Statement suggests the President has legal advice that it will.  Time will show whether or not that advice is right.

However irrespective of whether or not the challenge succeeds, I have no doubt President Trump is politically wise to take this course.  To have done anything else would as I have said have deepened the political crisis in the US and damaged the authority of the President to no useful purpose.

At least in this way the President is keeping his legal powder dry, and his future options open.