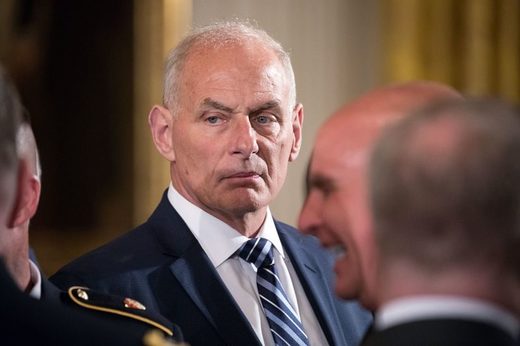 Gorka made his comments the day after Attorney General Jeff Sessions delivered a press conference in which he vowed to stomp out the “culture of leaking” that has plagued President Donald Trump and his administration ever since he took office in January. Whenever leaks have poured out of the government agencies or from the White House itself, Gorka said that both the Trump administration and U.S. national security interests have been compromised. Noting that Kelly began his new post as Trump’s chief of staff Monday after serving as Trump’s secretary of Homeland Security, Gorka predicted that the culture of leaking will change “very rapidly” under the West Wing’s newest staff leader.

“Yesterday we had the four star general, former four star General John Kelly give an all-hands speech first-thing to everybody inside the Eisenhower Executive Building who works for the White House,” Gorka said. “He started the day by saying, ‘Loose lips sink ships, and if you leak, there will be consequences.’ That’s a four star Marine Corps legend.”

Noting that “the facts are the facts,” the president’s deputy assistant said that the Trump administration has sent five times as many criminal indictment referrals to the Department of Justice regarding leaking classified materials “in just the first six months of our administration, as opposed to the whole year last year.”

Now that Kelly has taken the reins from ousted chief of staff Reince Priebus, Gorka said he anticipates the formation of a stronger, tighter and more disciplined White House.

“For those like myself who have nothing to hide, we’re doing business as usual. And we’re very glad [Kelly’s] there,” Gorka said, although he admitted that he was “sad [Kelly] left DHS because he did amazing things in just the last six months at DHS.”

“For those who may have not been abiding by federal law when it comes to sensitive and classified information, I think they’ve got the message,” Gorka said. “And I think you will see things change very rapidly because this is John F. Kelly. This is a man you do not toy with.”

Gorka also commented on Sessions’ decision to review the Justice Department’s policy on media subpoenas. Noting that reporters can cause significant when they publish classified or sensitive materials leaks from government sources, Gorka said it is sometimes difficult to balance the hallmark of a free press with U.S. national security concerns.

“Democracy thrives upon a free press. It’s essential, ok? That’s one of the markers between a free society and a society that’s a slave society,” Gorka said. “But the fact is there’s a reason that this information is classified. It’s not a joke. You are endangering the lives of Americans when you release secret or top-secret information.”

The White House deputy assistant pointed to the Washington Post’s decision to publish leaked transcripts from Trump’s private conversations with world leaders. Although these leaks most likely didn’t compromise national security interests, they embarrassed the administration and drew backlash from Republicans and Democrats alike.

In particular, Sen. Mark Warner from Virginia, the top Democrat on the Senate Intelligence Committee, told the Daily Beast those leaks were “absolutely” troubling and called for an investigation into the transcript leaks.

“Just the idea, just the idea that the president of the United States cannot have a confidential phone call with another head of state is outrageous,” Gorka said. “And when you get Democrat politicians on the Hill say that that leak is disgraceful, you know we have sunk to a new low.”