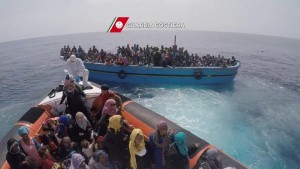 For some time now there have been suspicions that the “migrant crisis” didn’t just happen. That it was in fact part of a darker game plan: wherein migrants were being encouraged to take advantage of Western gullibility regarding “refugees”.

The following report substantiates claims that those in the pay of financier George Soros, who were ostensibly helping refugees, were in fact actually assisting human traffickers.

According to Hungarian President Viktor Orban:

“These activists who support immigrants inadvertently become part of this international human-smuggling network.”

Now it appears that those activists who were in Soros’ pay weren’t “inadvertently” assisting but consciously colluding with human traffickers. The $500 million Soros “donated” to help migrants was probably used to encourage even more of them to venture to Europe.

The objective being to flood the continent with migrants, who will then help undermine its social fabric and provide a large reservoir of cheap labour. For the likes of Soros it’s a win-win situation: with reduced labour casts and social disintegration providing new areas for exploitation in the service industry.

As an added bonus it will also help destroy what remains of the European middle classes, a prime Illuminati objective.

The end result being a modern feudal society, comprised of a favoured few served by a cadre of security personnel and technocrats, leaving the vast majority mired in poverty — all of whom would be beholden to a few mega rich oligarch’s like Soros. Ed.

A charity boat operating in the Mediterranean allegedly colluded with people smugglers to accept multiple ‘deliveries’ of migrants, investigators have revealed.

Photographs captured by undercover officers show the criminals ‘escorting’ vessels packed with asylum seekers before being transferred to aid boats bound for Italy.

The images emerged after Italian authorities carried out their first seizure of a rescue boat on suspicion of aiding illegal immigration.

German charity Jugend Rettet is also accused of towing boats used to ferry migrants back towards Libya, where most migrants hoping to reach Europe depart, to be reused by smugglers.

The revelations emerged after investigators took the unprecedented move of impounding the aid organisation’s vessel, Iuventa, at Lampedusa on Wednesday.

Details about the alleged collusion were contained in documents outlining the case prepared by prosecutors in Sicily following months of accusations about charities co-operating with smugglers.

Ambrogio Cartosio, the chief prosecutor from the Sicilian city of Trapani who is behind the investigation, said that no arrests had been made and that inquiries are continuing.

‘We have evidence of encounters between traffickers, who escorted illegal immigrants to the Iuventa, and members of the boat’s crew,’ he said but added that there was no evidence that charity members received any money from the traffickers.

He said that their motivation was ‘humanitarian’.

The investigation, launched in October 2016, centres on three specific incidents involving the 100ft vessel, but investigators are analysing other aspects of the charity’s operations.

Prosecutors are said to have gathered evidence from an undercover police officer working on another boat, along with evidence from workers on Save the Children’s Vos Hestia vessel.

The charity, which means ‘youth rescues’, refused to comment on the precise allegations but said in a statement that the ‘rescue of human life is and will be our top priority’.

Details of the investigation emerged amid a row between the Italian government and the eight charities operating in the Mediterranean over a controversial code of conduct issued by Rome.

Senior Italian officials yesterday insisting that charities who do not sign up will be blocked from undertaking rescue missions unless the code is adhered to.

It is unclear how the threats to the charities would be enforced. Experts say a blockade could contradict international law which says vessels have a obligation to help those who are in distress.

Charities are responsible for between 35 and 40 per cent of rescues in the area.