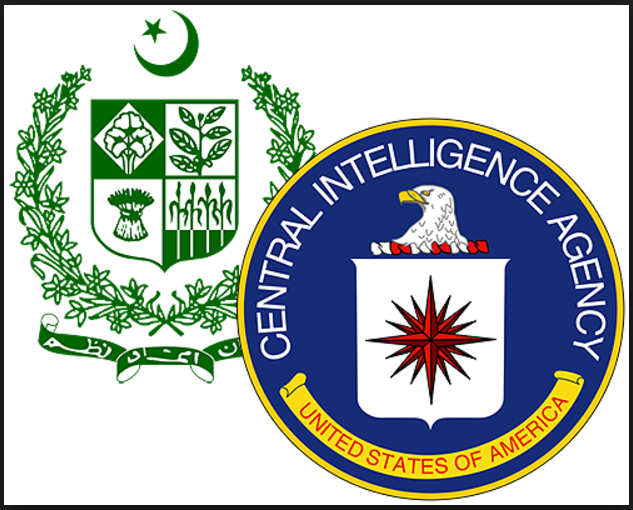 Were the Awan brothers really gathering intelligence for Pakistan’s ISI (Inter-Services Intelligence)?  And was the ISI on secret contract with the C.I.A.?

The ever-unfolding scandal known as Awangate can only be understood by viewing it through the lens of the international collusion that routinely takes place between intelligence agencies.  Only in this way can the agents of Deep State be legally sequestered from investigation, prosecution and/or incarceration.  Except that Imran Awan did not get away quickly enough to be shielded from the consequences of such a heavy conspiracy.

It’s often been stated by experienced investigators that the ISI played a central role in the false flag terror attack on 9/11/01.  As a matter of fact, ISI fingerprints have been found on many terrorist bombings and political scandals over the years in nations far from Pakistan. There are specific reasons for this which the active Awan case clearly illustrates.

Special Note:
What the nation is now experiencing is a full-blown C.I.A. black operation.  The U.S. Intelligence Community knows that the purposefully planted ISI espionage cell (i.e. Awan brothers et al.) has been outed.  These black ops are routinely executed in any country that is about to become the victim of a full-scale color revolution (now known as the ongoing Purple Revolution).  Everything about Awangate smacks of the CIA’s well-known MO—contract out the most precarious espionage work to foreign intelligence agencies (e.g. ISI) so that the C.I.A. possesses plausible deniability should the op be exposed.  Now that this critical piece of the CIA’s unlawful surveillance of the US Congress has been revealed, The Company is desperate to quash an investigation any way they can.  This is why the fabricated “Russia collusion” story simply won’t die, and seems to get even bigger with each bogus non-story. Because the C.I.A. literally owns and operates every major MSM organ of propaganda, they completely control this utterly fake narrative.  However, given the CIA’s flagrant criminality in spying on Congress utilizing foreign intelligence agencies, they will not – cannot – relent in pushing the many transparent falsehoods about ‘Russia hacking’, etc.  The Company (as the C.I.A. is known within intelligence circles) knows that it would go bankrupt in a day and night should the true back story be widely disclosed about Awangate.

All the evidence points directly to fired DNC Chairwoman Debbie Wasserman Schultz as the CIA’s point-person in this ongoing crime spree perpetrated in collaboration with Pakistani brothers Imran, Abid, Jamal Awan, as well as their ISI associates.  Remember those three names.  However, it’s Rep. Wasserman Schultz who is the CIA’s pivotal inside agent for this seditious operation.

Who does not know that Wasserman Schultz was the DNC Chair during the totally corrupted Democratic primary?  The highly incriminating leaked emails from that extremely sordid period of US presidential history speaks volumes about the lack of ethics exhibited by the disgraced chairwoman.

What’s quite shocking is the degree of naked criminality that Wasserman Schultz boldly displays even to this very day.  It’s as though she has a power standing behind her that permits her to act with utter impunity.  The American people have never witnessed such sheer audacity and chutzpah where it concerns treasonous conduct. As follows:

Napolitano: He was arrested for some financial crime – that’s the tip of the iceberg.  The real allegation against him is that he had access to the emails of every member of Congress and he sold what he found in there.  What did he sell, and to whom did he sell it?  That’s what the FBI wants to know.  This may be a very, very serious national security situation
(Source: Judge Napolitano: Awans Had Access To Email Of Every Member Of Congress, Sold Information)

In the wake of these security breaches and legal problems for Imran Khan, he is now “frantically” selling off his real estate as he [tried to] moves back to Pakistan.  His wife — Hina Alvi — has apparently preceded him in their relocation back to their homeland after a criminal investigation was initiated against her husband.  Perhaps the following investigative report excerpt and this FBI affidavit explain why she left in such a hurry.

Imran Awan, a congressional aide arrested by the FBI after wiring $300,000 to Pakistan and misrepresenting the purpose, had previously wired money to the country and was frantically liquidating multiple real estate properties on the day he was arrested, The Daily Caller News Foundation Investigative Group has learned.

Imran’s real estate properties provide a source of money that could be sent directly to Pakistan when two upcoming home sales close. Prosecutors have since filed paperwork saying they fear “the dissipation of the proceeds of the fraud and destruction of evidence in other locations.”

Imran was arrested July 24 — four months after the FBI says his wife Hina Alvi moved to Pakistan after learning the family was the subject of a criminal investigation into their work as IT administrators for House Democrats.
(Source: Wasserman Schultz Aide In Pakistan Still Liquidating Assets In US)

Who gave the 3 Pakistanis brothers digital access to so much sensitive data and classified information in the first place?

That, is truly the $64,000 question here.  Not only was Wasserman Schultz instrumental in the hiring of the Awan brothers, she kept them on as congressional IT consultants well after they were the subjects of a “national security-oriented” FBI criminal investigation. The Florida rep only fired Imran Awan after he was formally arrested at the airport attempting to flee the USA. Wasserman Schultz IT aide arrested trying to leave the country

Why this same IT worker smashed the hard drives only further lends credence to an espionage operation which had to be overseen by the C.I.A.  It was the FBI that found and retrieved the damaged drives, but given that agency’s dismal record, it appears this was done to maintain the secrecy of the black op, not to prosecute the traitors for the real crimes. FBI Investigating Smashed Hard Drives Retrieved from Wasserman Schultz’s Pakistani-Born IT Worker’s Home

Curious Response of the Democratic Party

What has been very strange throughout this multi-month CIA-coordinated crime wave is the complete lack of response by any Democratic member of either the House or Senate. Given the profound compromise of private communications sent to and fro within Congress, one would think everyone involved would be demanding investigations and resignations.  The rather muted reaction by the Republican side also gives reason to believe that this black op is controlled at the very top of the D.C. power structure.

How many Democratic lawmakers are involved?
According to Rosiak, the family members worked for at least 80 House Democrats in their decade-plus on the Hill. Though Wasserman Schultz is certainly the highest-profile House member ensnared in the scandal and did herself no favors by keeping Awan on her payroll long after everyone else canned him, she’s far from the only lawmaker who could have been the target of data theft or, as Rosiak claimed in a later story, blackmail. The Daily Caller released a handy chart showing how many other Democrats were tied to the Awans: The list includes South Florida’s Ted Deutch and Frederica Wilson, and Lois Frankel.(Source: Wasserman Schultz’s IT Scandal Only Gets Bigger By The Day)

Furthermore, that Awan retained an attorney long associated with the Clintons is of particular interest.  Why else would the Democrats do so much to protect an ISI agent and transparent cyber-criminal unless there was much more at risk than meets the eye? Arrested DNC Staffer Awan Retains Long-Time Clinton Associate For Legal Help

The longer this saga continues, the more is breaking out in the open.  Slowly but surely, more investigative journalists are looking more deeply into the many unprecedented irregularities and extraordinary lapses in this episode of congressional security breaches. However, no matter who is doing the investigating, everyone seems to hit a wall.  There is an inexplicable info blackout beyond a certain depth of crucial research.  That’s how the CIA controls all of their black ops.

To be sure, the tale is a strange one with plenty of unsavory links. Thirty-seven-year-old Awan, as well as his wife and two brothers Abid and Jamal, worked as IT administrators for [numerous] congressmen, all Democrats, including former Democratic National Committee Chair Debbie Wasserman-Schultz. They did not have security clearances and it is not even certain that they were in any way checked out before being hired. At one point, they brought into the House as a colleague one Rao Abbas, someone to whom they owed money and who might have had no qualifications at all to work IT. Abbas wound up working in the office of Rep. Patrick Murphy, who was at the time a member of the House Intelligence Committee, as well as for Rep. Theo Deutch. He was paid $250,000.
(Source: The Strange Case of Imran Awan)

Everything speaks to Rep. Wasserman Schultz being a stone-cold MOSSAD agent.  If she’s not a card-carrying agent, then certainly she is an exceedingly loyal sayanim.  To date she has shown an unusual recklessness and willingness to do whatever she must to protect this black op.  Never before have the American people been treated to a crime committed by a member of Congress in real time.  And her command and control of the MSM only confirms the political power that she possesses which is rarely, if ever, seen.

KEY POINT: C.I.A. spying on Congress is not without precedent.  The American people were treated to a disastrous CIA spying scheme against Congressional leadership in 2014.  Even the ever-compliant Diane Feinstein expressed her strong misgivings about having been spied on by the C.I.A. (A Brief History of the CIA’s Unpunished Spying on the Senate)  Likewise, Deep State often arranges for collusion between foreign intel agencies and secret services to do their dirty deeds like the C.I.A. and NSA did when they “wiretapped” Candidate Trump’s campaign headquarters.  In that recent criminal case, Great Britain’s GCHQ was employed to conduct the illicit espionage. (Trump Wiretapping Mystery Solved: G C H Q)

Like so many other serious scandals throughout the Obama era, Watergate pales in comparison to Awangate.  The sheer depth and breadth of official criminality which directly concerns national security is breathtaking.

What is much more breathtaking, however, is the lack of initiative and will to do anything about it.  The leadership of both parties is either AWOL, out to lunch, or there’s simply nobody home.

That the Republicans have permitted these grave transgressions to go relatively unscrutinized for so long reflects complicity at the highest levels of Congressional leadership.

In other words, they are all obviously controlled by the same shadow government.

Now that this cat is out of the bag for all to chase around, there’s absolutely no putting it back in.

Welcome to Awangate — and what will surely become the scandal of the century.