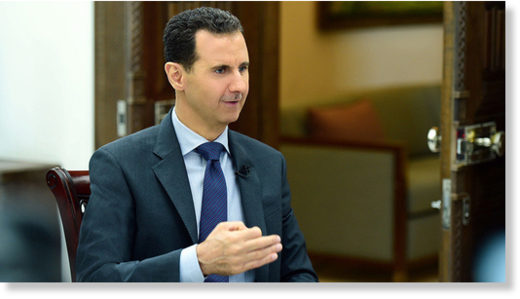 Any form of constructive dialogue with the West and its regional allies will only be possible after they stop supporting the terrorists, Syrian president Bashar Assad has said. He also cautioned that it’s too early to talk about victory in the conflict despite recent gains by Damascus.

“Our army is achieving one gain after another every day to eliminate terrorists… We will continue to attack terrorists until the last terrorist on Syrian land [is gone],” Assad said in a televised address Sunday.

The Syrian leader also praised the role of the Russian air force and Hezbollah fighters on their ground for their continued support in fighting terrorism.

“The direct support of our friends, politically, economically and militarily, made our advance on the ground greater and the losses of war less. Therefore, they are our partners in these achievements on the road to crush terrorism,” Assad said in a speech delivered at the opening of the Foreign and Expatriates Ministry Conference Sunday.

At the same time, Assad dismissed any prospects of cooperation with members of the US-led coalition until Washington and its allies in the region stop sponsoring terrorism.

“Let’s be clear. There will be no security cooperation, nor opening of embassies or even a role for some countries that say that they want to play a role in ending the crisis in Syria before they clearly and frankly cut their relations with terrorism. At that point maybe we can speak about opening embassies,” he said as cited by the Guardian.

Assad noted that “the West is like a snake, changing its skin according to the situation,” and that any rhetoric which claims that Western countries are fighting terrorism does not necessarily support the reality on the ground, Syria’s SANA news agency reported.

“We paid a dear price in Syria in this war, but we have managed to foil the Western project in Syria and the world,” he said. “They have failed until this moment, and we haven’t won until this moment. The signs of victory are there, but signs are something and victory itself is another thing,” president Assad said.

The president welcomed the creation of the de-escalation zones where no air strikes and fighting between warring parties are allowed. The proposal to establish four de-escalation zones was signed by Russia, Iran and Turkey, with the approval of the Syrian government in the Kazakh capital Astana in May. The UN has welcomed the initiative which excludes Islamic State and Jabhat al-Nusra linked terrorist cells.

“The idea of these de-escalation zones is to stop the bloodletting… and the eviction of the armed groups handing over their weapons and the return of normalcy. We have an interest in the success of this initiative,” Assad explained.

Assad, though, was emphatic in rejecting the idea of any “safe zones” unilaterally-declared by US in Syria, saying they would only “give cover to terrorists.”

The president also addressed the state of the Syrian economy after the six-and-a-half-year conflict. Assad said it has now resumed growth “at a very slow pace, although we are under an almost complete embargo.”