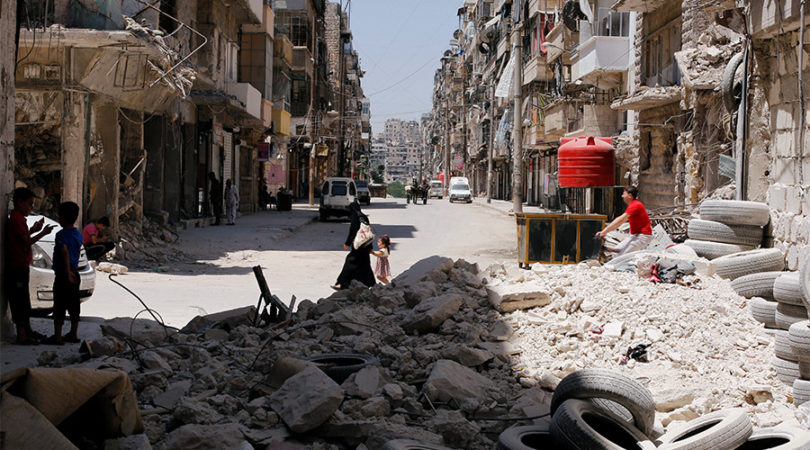 RT
Upon hearing the news that President Donald Trump is expected to phase out the CIA’s covert Syrian program, established by his predecessor Barack Obama, to arm and train anti-government ‘rebels’ in Syria, how did you respond?

a.) Welcome the news because it’s a positive step on the road to peace and reconciliation in Syria and a promising sign the US has finally given up on (or at least put on the back burner), plans for an illegal ‘regime change,’ or

b.) go into a hissy fit, kick the cat, swear loudly at the TV and accuse the POTUS on Twitter of handing Russia ‘a victory.’

The decision by #Trump to discontinue support for anti #Assad forces in #Syria is a victory for common sense. He deserves commendation

Well, I‘m sure for most ordinary members of the human race, keen to see an end to the suffering of the people in Syria, the right answer would be (a). Phasing out ‘Timber Sycamore’ (The code name of the CIA’s program), while keeping in mind that it won’t end US interference in Syria, but at least it’s a step in the right direction.

For the inhabitants of ‘Planet NeoCon’ and their pro-war ‘liberal’ allies, however, news the CIA will no longer be backing people to blow up and cut off the heads of Syrians with the ‘wrong’ views has led to expressions of outrage, anger, and grief.

Peace breaking out in Syria? Why that’s an absolute friggin’ disgrace! Better for the Syrian people to endure another 20 years of bloody conflict than to hand Russia ‘a victory’!

Never has the neocon agenda been so transparent as in the last few days. Those who have posed as concerned and humanitarian ‘Friends of Syria’ seem panic-stricken that the bombs may soon stop going off in the Arab Republic, and life in the country will get back to normal, with President Assad still in power and Syria’s international alliances not just unbroken but strengthened.

The programme set up and run by Obama who, as the 'MSM' tirelessly told us, stubbornly refused to 'intervene' in Syria. https://t.co/rv4kfF5565

The aim of the operation from the outset, let’s be clear here, was not just to topple Assad but to turn Syria into a failed state, as US-led wars/interventions have done to Iraq and Libya. For that, the US president needs to be ordering the CIA to step up its covert support for anti-government ‘rebels,’ not telling them to end it. Hence the anger of the ‘Endless War lobby.’ They know what’s at stake. They know that despite all their efforts to destroy the secular Syrian Arab Republic as a functioning, independent nation, they’re currently staring a humiliating defeat in the face.

The heroic Syrian people haven’t buckled. Syria’s international allies have stood firm. Assad hasn’t flinched, or done a ‘Marin Cilic.’ Trump, for all his faults, appreciates the new reality and has acted accordingly. But the neocons and pro-war liberals construct their own reality, as we saw in 2003 and their claims that Iraq possessed WMDs.

A positive move by the US president, one that increases the chances of an end to the hostilities in Syria, is portrayed as a disaster for America and the world.

Never mind that ‘rebels’ trained under the CIA’s program had defected, along with their arms, to ISIS and other radical jihadist groups. The Obama administration’s Syria policy “effectively sold out the US interest that was supposed to be the touchstone of the ‘Global War on Terrorism’—the eradication of Al-Qaeda and its terrorist affiliates,”writes Gareth Porter, in his article How America Armed Terrorists in Syria.

Never mind too, the enormous cost of Timber Sycamore to US taxpayers, which some reports put at $1bln a year. For the likes of Applebaum, any policy, however expensive or destructive, can be justified so long as it undermines Russia or a Russian ally.

It's getting embarrassing Anne. First you call a public G20 meeting 'treason', then genuine peace attempts are now weakness? 1/

Noah Rothman of Commentary magazine seemed even more upset. He tweeted “This is huge. An absolute outrage. The first real Trump concession to Putin that undermines US security directly.”

This is huge. An absolute outrage. The first real Trump concession to Putin that undermines U.S. security directly. https://t.co/h9WR4brHHK

But the Syrian government has never been a security threat to the US, quite the contrary; in 2006, Syrian state security forces foiled an attack by an Al-Qaeda affiliate on the US Consulate in Damascus. “Syrian officials came to the aid of the Americans. The US is grateful for the assistance the Syrians provided in going after the attackers,”said White House Press Secretary Tony Snow.

That, of course, is conveniently forgotten by the ‘Endless War’ crowd today. And rather predictably, John ‘Bomb, Bomb Iran’ McCain expressed his anger at the prospect of peace breaking out in Syria. “If these reports are true the administration is playing right into the hands of Vladimir Putin. A key pillar of American strategy must be the removal of Assad from power,”the old warmonger thundered.

Not to be outdone, Lindsey Graham, McCain‘s Republican sidekick, tweeted of the ending of the CIA program: “If this is true, a big loss for 1) Syrians who have been relentlessly attacked by Assad 2) Our Arab partners 3) US standing in the Middle East.”

If true, big loss for:
1) Syrians who have been relentlessly attacked by Assad
2) Our Arab partners
3) US standing in the Middle East. 2/3 https://t.co/VZ7rDeuFUG

All three statements from Graham are utter bilge.

If there are no ‘rebels’ blowing up government forces or attacking civilians supportive of the government, there’s no need for military counter-action from the Syrian Arab Army. Ending support for ‘rebels’ will help end the war.

Arab partners, such as Jordan, are, according to reports, supportive of Trump’s action. In fact, one said that “strong Jordanian pressure” was behind the new approach.

While other leading Arab ‘partners’ of the US, such as Egypt, have declared open support for the Assad government.

Finally, the US’s standing in the Middle East will only improve if it takes a less interventionist approach and ends its policies of ‘regime change.’

The only people for whom the change in policy is a ‘big loss’ is those who want to see Syria burn forever.

The reporting of Trump’s decision has, surprise, surprise, been overwhelmingly negative. “How Trump just made it a little easier for Assad to stay in power” was how The Atlantic presented it.

We’re clearly meant to disapprove, but what right does the US have to say who governs Syria in the first place? And, in any case, isn’t Assad staying in power preferable to ISIS, or Al-Nusra or ‘moderate’ rebels who chop off the heads of children?

After all, it isn’t Assad’s forces, or those inspired by his ideology, who have been massacring civilians in Manchester, London, Paris and across the world. Or aren’t we meant to notice this?

It’s noteworthy that none of those who are blasting the POTUS for ‘giving Russia a victory’ in Syria have anything to say about the illegality of the program which he has reportedly ended. It’s taken as a given that the CIA has the right to train, fund and arm rebels in other countries. Just imagine if the Syrian government approved its own security services doing the same in the US! The greatest fake news story of 2017 has been ‘Russian interference in the US election,’ but US interference in other countries is seen as perfectly normal. Such is the imperialistic mindset of the pro-war elites.

How is it a give-away to cease arms shipments to jihadists and de-escalate a civil war? Obama was on the same track by the end of his term.

It’s a mindset that many ‘liberals’ have too. As Army vet Anthony Rawlings noted on Twitter, in 1967 hippies were protesting CIA‘s war in Vietnam, in 2017, they‘re protesting the CIA’s withdrawal from Syria.

The good news is that Syria has proved to be the Stalingrad of the NeoCon Empire. But as in Nazi Germany in 1944/45, there are still some fanatics in the bunker unwilling to accept that it’s game over.