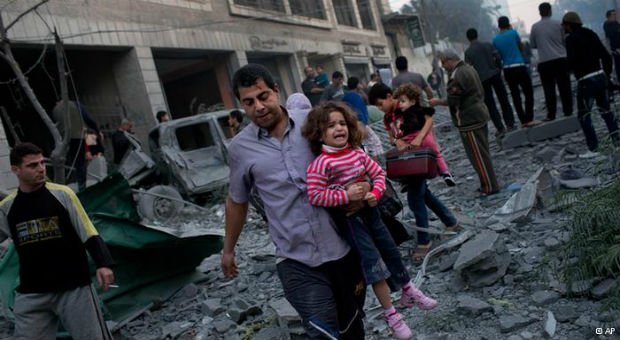 The US State department has recently released a stunning reporting saying that Palestinians are driven by a “lack of hope,” which precipitates violence in the region. It states:

“The PA has taken significant steps during President Abbas’ tenure (2005 to date) to ensure that official institutions in the West Bank under its control do not create or disseminate content that incites violence. While some PA leaders have made provocative and inflammatory comments, the PA has made progress in reducing official rhetoric that could be considered incitement to violence.

“Explicit calls for violence against Israelis, direct exhortations against Jews, and categorical denials by the PA of the possibility of peace with Israel are rare and the leadership does not generally tolerate it. In April, President Abbas condemned an attack on a Jerusalem bus and said he was against all forms of terrorist activity that affect Israelis and Palestinians.”

We are again and again confronted with an inexorable fact: the Zionist Kingdom will never address the central issue precisely because that would ruin the essentially Talmudic ideology, which basically says that Israel has to operate outside the moral and political order. They don’t like people to spy on them, but they very much want to eavesdrop on virtually everyone on the planet. Consider this.

After more than six years of spying on Muslim neighborhoods, the New York Police Department with the help of the CIA admitted that they have never found a trace of evidence that would lead them to anything suspicious.[3]

The Zionist Kingdom has obviously used the media to perpetuate their own agenda, and the fact that the State Department has written a long report on how the Palestinians are being mistreated by the Israeli regime shows that US officials know that Israel is a problem child. The State Department again states:

The Palestinian authorities, says the State Department, have adopted a modest view of the political situation, while Israel has refused to take responsibility for much of the chaos in the region. For example, In December 2012 Israel “inflamed both Palestinians and the global community” by planning to add three thousand new settlements in Jerusalem and the West Bank. European countries were upset.[4] America was no exception.[5]

Four hundred American rabbis and cantors saw that this could provoke reprisals, including a disconnection between the US and Israel.[6] But Netanyahu told the entire world that he will continue to build, ignoring the international community.[7] Not only that, the Prime Minister moved on to declare that he planned on building more in the next four years.[8]That’s not all. After the November Gaza Strip debacle, Haaretz declared how Israel has been destroying the Gazans:

“Since the beginning of the year, Israel has destroyed 35 rainwater cisterns used by Palestinian communities, 20 of them in the area of Hebron and the southern Hebron Hills. In 2011, Israel destroyed 15 cisterns, and in the preceding 18 months, 29. In many of these cases ancient cisterns were destroyed that had served the forefathers of the inhabitants of these communities.

“Recently, they have been restored with European assistance. The cisterns show the continuity of Palestinian habitation long before 1948….Leaving Palestinian communities disconnected from infrastructure, declaring large areas as firing zones and destroying cisterns are part of an intentional policy since the early 1970s. Its goal is to leave as few Palestinians as possible in the majority of the West Bank (today’s Area C, under Israeli civil and military control), to expedite Jewish settlement and thus make it easier to annex these areas to Israel.”[9]

But no one dares sanction Israel, and if you even report what is actually taking place, you are by definition a vicious anti-Semite.

After the intifada in 2001, Netanyahu visited a group of families in a village in Ofra, which is located in the northern West Bank. During a conversation, Netanyahu declared how he planned to deal with the Palestinians:

One woman in the family asked: “Wait a moment, but then the world will say ‘how come you’re conquering again?” Netanyahu responded, “The world won’t say a thing. The world will say we’re defending.” The woman: “Aren’t you afraid of the world, Bibi?” Netanyahu: “Especially today, with America. I know what America is. America is something that can easily be moved. Moved to the right direction.”[10]

Suppose the vast majority of the Zionist regime turns its back on Israel? Bibi responded, “So let’s say they say something. So they said it! They said it! 80% of the Americans support us. It’s absurd. We have that kind of support…Look. That administration [Clinton] was extremely pro-Palestinian. I wasn’t afraid to maneuver there. I was not afraid to clash with Clinton.”[11]

There you have it. Netanyahu knows that he is manipulating US politicians. And US politicians know that they are Israel’s puppets. This is straight out of Zionism.