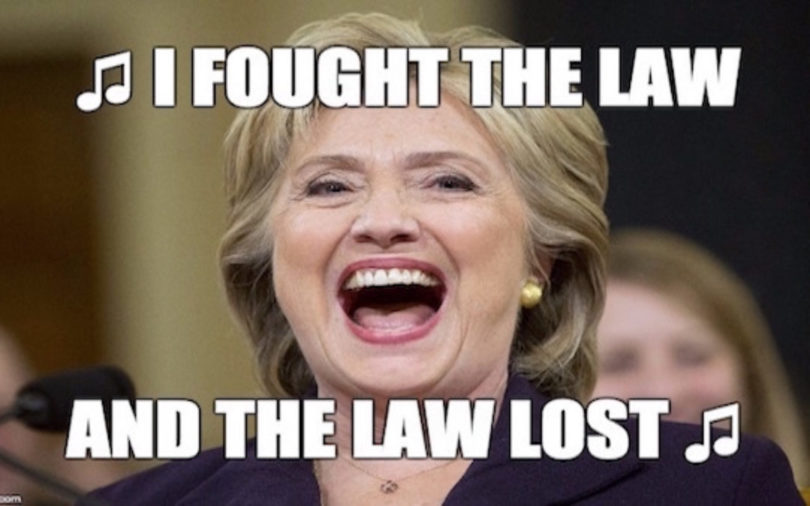 None of this takes away from the really foollish way Team Trump has handled the legal meeting between Donald Trump Jr., Paul Manafort, Jared Kushner and anywhere up to five Russians. But it would be an unexpected pleasant case of the MSM actually doing their jobs if they covered the latest examples (or any of the earlier ones) of former Secretary of State Hillary Clinton using the State Department (thus taxpayer money) to help the Clinton Family Foundation, make tons of cash.

On Friday, Judicial Watch, one of the few organizations digging for the truth, released 448 pages of documents from the U.S. Department of State revealing new examples of Huma Abedin, deputy chief of staff to the former state dept. chief providing special State Department treatment to major donors to the Clinton Foundation and political campaigns. Much of the explanation below comes directly from the Judicial Watch explanation of the emails.

The documents were heavily redacted and includes an email from Hillary Clinton’s brother, Tony Rodham, to Abedin revealing that he acted as a go-between for a Clinton Foundation donor, Richard Park. And they show Clinton Foundation executive Doug Band instructing Abedin to “show love” to Clinton donor Andrew Liveris. On the bright side Abedin’s soon to be ex-husband didn’t get a copy of the email because chances are he would interpret the phrase, “show love.”

Some emails show how open they were in requesting and granting favors between Clinton’s State Department and the Clinton Foundation.

According to The Washington Examiner:

In Mаrch 2012, Bill Clintоn received an invitation to speak at the Kaesong Industrial Complex in North Korea…. Richard Park’s friendship with Tony Rodham earned him a direct line to Hillary Clinton while she served as secretary of state. In January 2013, the Korean businessman sent Rodham an email and asked him to “forward this to your sister.”

This emails also show that Abedin received advice from her mother, Saleha Abedin (a controversial Islamist activist), on whom the Obama administration should appoint as the US Envoy to the Organization of Islamic Cooperation.   She notes that she has obtained a recommendation from “Hassan” (NFI), and that she’d reached out to “Ishanoglu”. This is presumably Ekmeleddin Ihsanoglu, a Turkish academic and the former Secretary-Gеneral of the OIC. Ihsаnoglu famously called on the Wеst to enact anti-Islamic blasphemy laws.