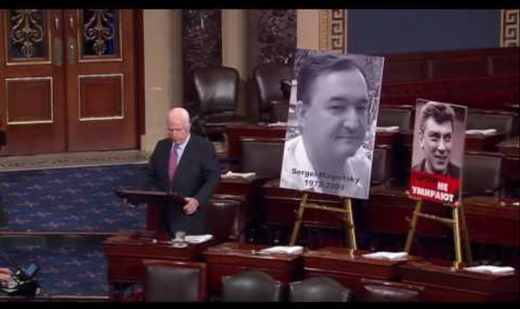 A documentary debunking the Magnitsky myth, which was an opening salvo in the New Cold War, was largely blocked from viewing in the West but has now become a factor in Russia-gate, reports Robert Parry.

Near the center of the current furor over Donald Trump Jr.’s meeting with a Russian lawyer in June 2016 is a documentary that almost no one in the West has been allowed to see, a film that flips the script on the story of the late Sergei Magnitsky and his employer, hedge-fund operator William Browder.

The Russian lawyer, Natalie Veselnitskaya, who met with Trump Jr. and other advisers to Donald Trump Sr.’s campaign, represented a company that had run afoul of a U.S. investigation into money-laundering allegedly connected to the Magnitsky case and his death in a Russian prison in 2009. His death sparked a campaign spearheaded by Browder, who used his wealth and clout to lobby the U.S. Congress in 2012 to enact the Magnitsky Act to punish alleged human rights abusers in Russia. The law became what might be called the first shot in the New Cold War.

According to Browder’s narrative, companies ostensibly under his control had been hijacked by corrupt Russian officials in furtherance of a $230 million tax-fraud scheme; he then dispatched his “lawyer” Magnitsky to investigate and – after supposedly uncovering evidence of the fraud – Magnitsky blew the whistle only to be arrested by the same corrupt officials who then had him locked up in prison where he died of heart failure from physical abuse.

Despite Russian denials – and the “dog ate my homework” quality of Browder’s self-serving narrative – the dramatic tale became a cause celebre in the West. The story eventually attracted the attention of Russian filmmaker Andrei Nekrasov, a known critic of President Vladimir Putin. Nekrasov decided to produce a docu-drama that would present Browder’s narrative to a wider public. Nekrasov even said he hoped that he might recruit Browder as the narrator of the tale.

However, the project took an unexpected turn when Nekrasov’s research kept turning up contradictions to Browder’s storyline, which began to look more and more like a corporate cover story. Nekrasov discovered that a woman working in Browder’s company was the actual whistleblower and that Magnitsky – rather than a crusading lawyer – was an accountant who was implicated in the scheme.

So, the planned docudrama suddenly was transformed into a documentary with a dramatic reversal as Nekrasov struggles with what he knows will be a dangerous decision to confront Browder with what appear to be deceptions. In the film, you see Browder go from a friendly collaborator into an angry adversary who tries to bully Nekrasov into backing down.

Ultimately, Nekrasov completes his extraordinary film – entitled “The Magnitsky Act: Behind the Scenes” – and it was set for a premiere at the European Parliament in Brussels in April 2016. However, at the last moment – faced with Browder’s legal threats – the parliamentarians pulled the plug. Nekrasov encountered similar resistance in the United States, a situation that, in part, brought Natalie Veselnitskaya into this controversy.

As a lawyer defending Prevezon, a real-estate company registered in Cyprus, on a money-laundering charge, she was dealing with U.S. prosecutors in New York City and, in that role, became an advocate for lifting the U.S. sanctions, The Washington Post reported.

That was when she turned to promoter Rob Goldstone to set up a meeting at Trump Tower with Donald Trump Jr. To secure the sit-down on June 9, 2016, Goldstone dangled the prospect that Veselnitskaya had some derogatory financial information from the Russian government about Russians supporting the Democratic National Committee. Trump Jr. jumped at the possibility and brought senior Trump campaign advisers, Paul Manafort and Jared Kushner, along.

By all accounts, Veselnitskaya had little or nothing to offer about the DNC and turned the conversation instead to the Magnitsky Act and Putin’s retaliatory measure to the sanctions, canceling a program in which American parents adopted Russian children. One source told me that Veselnitskaya also wanted to enhance her stature in Russia with the boast that she had taken a meeting at Trump Tower with Trump’s son.

But another goal of Veselnitskaya’s U.S. trip was to participate in an effort to give Americans a chance to see Nekrasov’s blacklisted documentary. She traveled to Washington in the days after her Trump Tower meeting and attended a House Foreign Affairs Committee hearing, according to The Washington Post.

There were hopes to show the documentary to members of Congress but the offer was rebuffed. Instead a room was rented at the Newseum near Capitol Hill. Browder’s lawyers. who had successfully intimidated the European Parliament, also tried to strong arm the Newseum, but its officials responded that they were only renting out a room and that they had allowed other controversial presentations in the past.

Their stand wasn’t exactly a profile in courage. “We’re not going to allow them not to show the film,” said Scott Williams, the chief operating officer of the Newseum. “We often have people renting for events that other people would love not to have happen.”

In an article about the controversy in June 2016, The New York Times added that “A screening at the Newseum is especially controversial because it could attract lawmakers or their aides.” Heaven forbid!

So, Nekrasov’s documentary got a one-time showing with Veselnitskaya reportedly in attendance and with a follow-up discussion moderated by journalist Seymour Hersh. However, except for that audience, the public of the United States and Europe has been essentially shielded from the documentary’s discoveries, all the better for the Magnitsky myth to retain its power as a seminal propaganda moment of the New Cold War.

After the Newseum presentation, a Washington Post editorial branded Nekrasov’s documentary Russian “agit-prop” and sought to discredit Nekrasov without addressing his many documented examples of Browder’s misrepresenting both big and small facts in the case. Instead, the Post accused Nekrasov of using “facts highly selectively” and insinuated that he was merely a pawn in the Kremlin’s “campaign to discredit Mr. Browder and the Magnitsky Act.”

The Post also misrepresented the structure of the film by noting that it mixed fictional scenes with real-life interviews and action, a point that was technically true but willfully misleading because the fictional scenes were from Nekrasov’s original idea for a docu-drama that he shows as part of explaining his evolution from a believer in Browder’s self-exculpatory story to a skeptic. But the Post’s deception is something that almost no American would realize because almost no one got to see the film.

The Post concluded smugly: “The film won’t grab a wide audience, but it offers yet another example of the Kremlin’s increasingly sophisticated efforts to spread its illiberal values and mind-set abroad. In the European Parliament and on French and German television networks, showings were put off recently after questions were raised about the accuracy of the film, including by Magnitsky’s family.

“We don’t worry that Mr. Nekrasov’s film was screened here, in an open society. But it is important that such slick spin be fully exposed for its twisted story and sly deceptions.”

The Post’s gleeful editorial had the feel of something you might read in a totalitarian society where the public only hears about dissent when the Official Organs of the State denounce some almost unknown person for saying something that almost no one heard.

The Post’s satisfaction that Nekrasov’s documentary would not draw a large audience represents what is becoming a new paradigm in U.S. mainstream journalism, the idea that it is the media’s duty to protect the American people from seeing divergent narratives on sensitive geopolitical issues.

Over the past year, we have seen a growing hysteria about “Russian propaganda” and “fake news”with The New York Times and other major news outlets eagerly awaiting algorithms that can be unleashed on the Internet to eradicate information that groups like Google’s First Draft Coalition deem “false.”

First Draft consists of the Times, the Post, other mainstream outlets, and establishment-approved online news sites, such as Bellingcat with links to the pro-NATO think tank, Atlantic Council. First Draft’s job will be to serve as a kind of Ministry of Truth and thus shield the public from information that is deemed propaganda or untrue.

In the meantime, there is the ad hoc approach that was applied to Nekrasov’s documentary. Having missed the Newseum showing, I was only able to view the film because I was given a special password to an online version.

From searches that I did on Wednesday, Nekrasov’s film was not available on Amazon although a pro-Magnitsky documentary was. I did find a streaming service that appeared to have the film available.

But the Post’s editors were right in their expectation that “The film won’t grab a wide audience.” Instead, it has become a good example of how political and legal pressure can effectively black out what we used to call “the other side of the story.” The film now, however, has unexpectedly become a factor in the larger drama of Russia-gate and the drive to remove Donald Trump Sr. from the White House.

Investigative reporter Robert Parry broke many of the Iran-Contra stories for The Associated Press and Newsweek in the 1980s. You can buy his latest book, America’s Stolen Narrative, either in print here or as an e-book (from Amazon and barnesandnoble.com).

One thought on “Magnitsky Act – myth used against Russia”