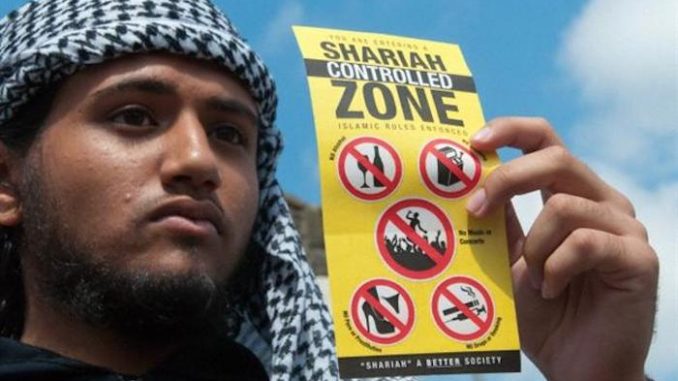 A German court has authorized a group of self-appointed Sharia police to continue patrolling the streets and enforcing Islamic law in the city of Wuppertal.

The court ruled that the group, led by a hate preacher facing prosecution for sponsoring terror, could only have broken the law if the vests bearing the words “Shariah police” were “suggestively militant or intimidating”, a court spokesman said.

German law specifically outlaws uniforms that are threatening, such as those of Hitler’s brownshirts.

However many German citizens disagree with the court ruling, claiming they are intimidated by the orange hi-visibility jackets emblazoned with the words “Shariah police” worn by the Islamists.

The issue has been brewing since 2014, when some German politicians reacted strongly to reports of young Salafists conducting nightly Sharia police patrols in the city, ordering people to stop various activities, according to the International Business Times.

The Shariah police reportedly approached people near nightclubs, bars and casinos to deter them from un-islamic activities such as drinking alcohol and gambling.

Led by German Salafi convert Sven Lau, the unit members scolded nightclubbers for drinking alcohol, in an attempt to enforce their hard line interpretation of Islam. Lau, pictured above, is a controversial Islamist hate preacher facing prosecution for supporting an ISIS-linked terror group in Syria.

Interior Minister Thomas de Maiziere earlier said that the self-appointed Shariah police must not be allowed to patrol the streets instead of German police.

“Sharia law is not tolerated on German soil,” de Maiziere told the German daily Bild. “Nobody can take it upon themselves to abuse the good name of the German police,” he added.

But a government minister denouncing the actions of the Sharia police is one thing, and the ruling of the court is another. The fact is Muslim men are now legally cleared to patrol German streets and enforce radical Islamic law.

Creeping Sharia? Germany is well and truly past that stage. The civilized world is losing a war it does not even know it is fighting. Ladies, you best pick up your burkas while they are cheap and you are still allowed to drive yourself to the store.

“Sharia patrols” are not just a German problem. They have been reported in other European cities including London, Copenhagen and Hamburg, raising fears of a creeping Islamification, endorsed by European elites and the legal system that protects them.