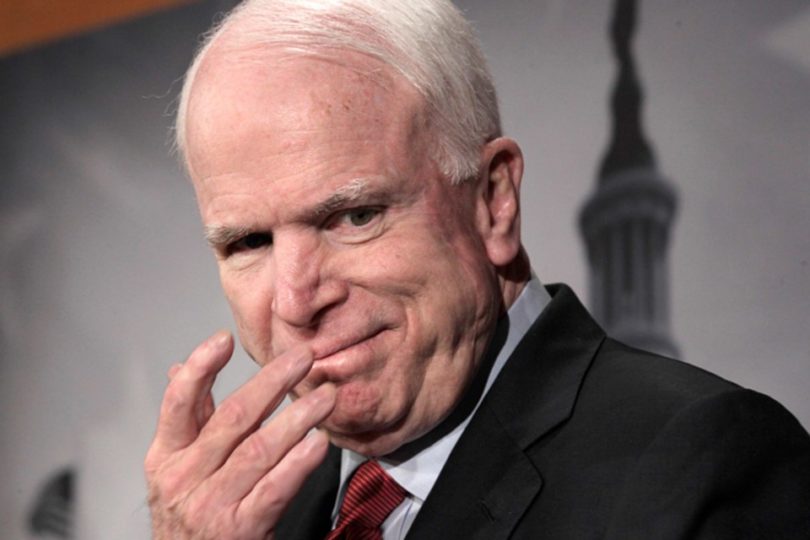 It is hard to estimate how much influence over U.S. domestic and foreign policy John McCain had. With his illness upgraded to a glioblastoma in his head, the likelihood of his return to a policy position is unlikely.

As I predicted earlier this week, the severity of McCain’s health problems will inevitably usher in a major power shuffle in Washington.

The Arizona senator’s absence creates a unique opportunity for President Trump to alter the course of our foreign and domestic policy. From Iraq to Libya, Syria to Afghanistan and right up to Russia’s borders in Ukraine, McCain’s bloody paw prints are all over more than a decade of American foreign policy blunders.

Most of these foreign policy nightmares have served, directly or indirectly, to weaken Russia’s western and southern flanks and prevent Eurasian integration. And of all the excrement that has exited McCain’s mouth, his hatred for Russia has always seemed most sincere. Everything else is politically fungible.

His irrational hatred of Russia made him the perfect vessel for neoconservative policy. It allowed him, without irony, to share the stage with Nazi-sympathizers in Ukraine or rub elbows with Salafist head-chopping radicals in Syria while ensuring a steady flow of taxpayer money to these animals.

With him gone the driving force is gone as well. Many who stood with McCain on these issues did so because Washington is the ultimate ‘go along to get along’ kind of place. And few, if any, in the Senate have his drive to continue the work. Notice how quiet Lindsay Graham has been the last couple of weeks.

Many will see the writing on the wall and kiss the ring of President Trump to avoid a primary challenge in the spring.

And some will see this as a great opportunity to retire now that the status quo has shifted. Don’t forget that Diane Feinstein, McCain’s Democrat doppleganger is retiring in 2018. Harry Reid and Barbara Boxer are gone. The generation of U.S. legislators that brought us this madness are being put out to pasture. Nancy Pelosi is in trouble as House Minority Leader.

Do you really think many Democrats and RINOs have the will to fight now that their GOP Trojan Horse is on chemo?

The fact is, that Senate rules as they stand with McCain, Graham, Corker and Rubio, require a two-thirds majority (including filibuster-proofing) to get anything fundamentally changed. There’s still a lot of work to do, but the worst of the opposition to Trump and the people’s desire to roll back our insane foreign policy is behind us, not in front of us.

Make no mistake, the neocons will attempt to regroup. Arizona Governor Don Ducey is now the most important person in the U.S. as he will be the one to appoint McCain’s replacement when that time comes. They will drag this out for as long as possible, holding McCain’s seat open to continue stalling Trump’s reform agenda. But both of these moves are rearguard actions rather than part of a counter-attack.

My biggest fear is that they drag him out, wheelchair-bound, like Old Shoe in the movie Wag the Dog, for one last kick at the anti-Russia can to enact legislation there is no coming back from. The hagiography of McCain began the moment the information was released. Everyone virtue-signaling their tails off to look sympathetic. But, the reality is most are scared of what happens next.

Once McCain is officially done, appointing people just as bad as McCain to his influential seats on the Armed Forces and Foreign Relations Committee will become the U.S. Deep State’s top priority.

The problem is, however, that Senate Majority Leader Mitch McConnell is now terminally wounded over his mishandling of Obamacare. So, McConnell will have little control over the process. He’s looking back at what happened to John Boehner and seeing his future. McConnell tried to salvage his leadership with an Obamacare full repeal vote that failed.

The Blame in Ukraine Falls Mainly on McCain

But, for right now, Trump has an opportunity to ignore the full-court Russia-gate press being put on by his opposition to make substantive foreign policy moves that don’t involve antagonizing Russia.

He can start in Ukraine.