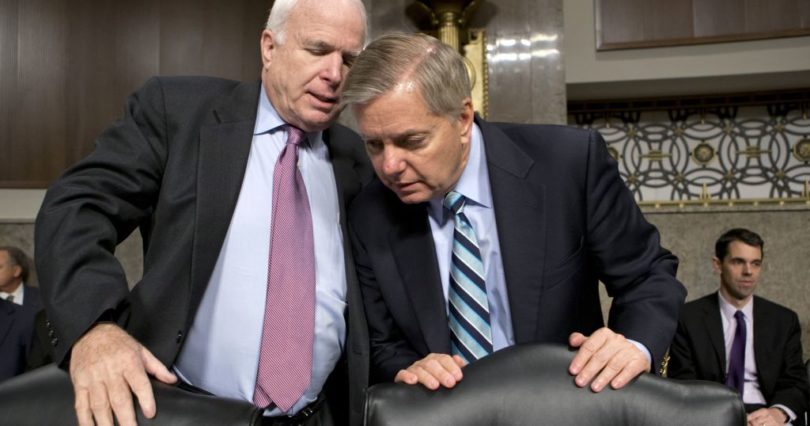 UKROGATE is the real foreign meddling scandal in the 2016 US Presidential election. These are just some of the people who should be thoroughly investigated for their ties to Kiev.

Incoming FBI Director Cristopher Wray has stated that he would be interested in investigating links between officials of the Ukrainian regime and the Hillary Clinton campaign.

With evidence mounting that high level officials in Kiev actively worked with the Clinton campaign to try and influence US voters, it is imperative that any future investigation isn’t whitewashed simply because Kiev’s tactics failed to win the election for Clinton.

Although the investigation into Donald Trump’s non-existent links with Russia have unsurprisingly come up with virtually nothing of interest, the methods of the investigation ought to be examined and replicated where necessary in a future Ukraine-Clinton investigation.

One of the most fascinating aspects of the so-called Russiagate investigation is that seemingly anyone connected to Donald Trump who ever had a conversation with a Russian, irrespective of their lack of involvement in Russian politics, is a person of interest to investigators.

The same tactics could be accurately applied to an investigation into Clinton and the Democratic party’s links with Ukraine.

Here are the people that ought to be questioned.

Hunter Biden is the youngest son of Barack Obama’s Vice President Joe Biden. In April of 2014, just two months after the February coup in Kiev, Joe Biden visited Ukraine where he gave a tub-thumping speech about the need for the Ukrainian regime to rely less on Russian gas supplies.

Weeks later, Hunter Biden was appointed to the board of directors of Ukraine’s largest private sector gas company, Burisma.

While many spoke of a prima facie conflict of interest in the appointment, the US mainstream media’s favourable stance towards the Obama administration meant that the story never saw the light of day.

The issue remains prescient, especially in light of allegations regarding wide spread Ukrainian collusion with the Democratic party in respect of the 2016 election.

The timing of Joe Biden’s anti-Russian Ukrainian gas speech and his son’s appointment to the board of a major Ukrainian energy company necessarily means that the former American Vice President is a person of interest.

No one could reasonably believe that the proximate timing of the former VP’s speech and his son’s appointment to the board of Burisma was coincidental.

This is a matter which speaks of itself.

For over 10 years, Chalupa, a US citizen of Ukrainian origin worked for the Democratic party. It has been established that she had multiple meetings at the Ukrainian Embassy in Washington D.C. in order to dig up dirt on former Trump campaign worker Paul Manafort.

Chalupa claims that her visits to the Ukrainian Embassy were for unrelated endeavours. Her word should not be take at face value. Her interactions with foreign officials in relation to the 2016 US election should be fully investigated.

Unlike Chalupa, McCain is not a Democrat, McCain has more political ties to Ukraine than anyone in the US Senate. His position as a former Presidential candidate and a strong critic of Donald Trump makes him a person of interest.

McCain is something of a fanatic when it comes to the Ukraine issue. Prior to the coup of February 2014, McCain was frequently pictured in Kiev with many extremist and fascist leaders who actively participated in the coup.

McCain recently visited Ukrainian leader Petro Poroshenko along with troops loyal to the regime during the 2016/2017 New Year’s holiday.

This visit, just weeks  before Donald Trump’s inauguration ought to be thoroughly investigated as well as McCain’s other connections to a plethora of Ukrainian politicians, leaders, business and military figures.

For these reasons and because of McCain’s increasingly dubious role in allegedly leaking the so-called ‘Urinegate’ dossier to the media, he is clearly a person of interest.

Maxine Waters is a Democratic Congresswoman from Los Angeles whose anti-Russian rhetoric is vile and at times incoherent, but nevertheless protected by free speech.

It is not clear if Waters has any direct connections with Ukrainian authorities, but an innocent prank call by the Russian comic callers Vovan and Lexus to Waters, reveals that she is highly susceptible to anti-Russian propaganda. The fact she engaged with the prank callers, seemingly believing that they were officials from Kiev, means that Waters ought to be questioned about any real calls she may have taken from actual Ukrainian regime officials.

For those who believe that Waters is far removed from the sandal, one ought to be reminded that political commentator Alex Jones has been accused by Hillary Clinton of being a Russian agent. It was later confirmed by Jones and other media outlets that the FBI is currently investigating whether Jones’s platform InfoWars as well as Breitbart had direct links with Russia.

InfoWars and Breitbart can hardly be considered Russophile outlets, but the fact remains that Waters has said far more in favour of Ukraine than InfoWars or Breitbart have of Russia.

What’s good for the goose is good for a much more prominent gander.

Lindsey Graham was a Trump opponent before it became fashionable in certain quarters. During the Republican primary, Donald Trump read out Graham’s private phone number and encouraged his supporters to ring up the Senator.

Graham was furious with Trump and later had to change his phone number.

When it comes to being a US Senator with close ties to the Ukrainian regime, only John McCain has more than Graham. Graham indeed accompanied McCain to Ukraine on his infamous New Year’s excursion and has close personal contacts with many individuals in Kiev.

For the same reasons McCain should be of interest to anyone who wants to unearth the extent of Ukrainian interference in American democracy, Graham ought to be on the list too.