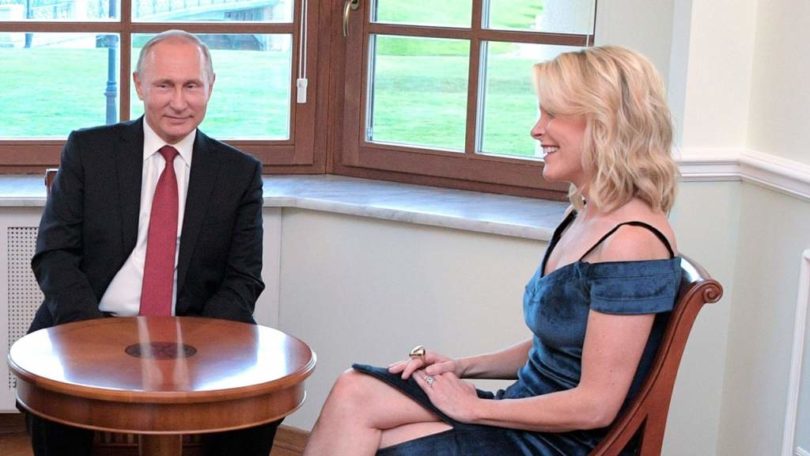 Putin to Kelly: “Look at your colleagues, what they are doing here [in Russia]. They are all over our domestic policy, they’re sitting on our head, dangling their feet and chewing a bubble gum. Entertaining themselves. It’s a systematic, rude and absolutely unceremonious interference in our domestic policies that lasts for many years, also at a diplomatic level.”

Megyn Kelly is back on the news media. She has recently done an exclusive interview with Vladimir Putin, but she should have done a little homework first. She should have reviewed the Fareed Zakaria and Charlie Rose interviews very carefully before she proceeded to challenge Putin.

It seems that Kelly hasn’t realized that Vladimir Putin is intellectually savvy and politically prudent. She doesn’t seem to get the idea that Putin is not a carbon-copy of the unpredictable Donald Trump, the guy who can say one thing today and change his mind completely the next day.

Kelly, as a New World Order agent, was regurgitating what the political mafia had desperately tried to articulate: Russia hacked the DNC and is therefore a threat to America. Kelly mentioned things like IP addresses, which she alleged were linked to Russia. Putin responded:

“IP addresses can be invented — a child can do that! Your underage daughter could do that. That is not proof. There is no specific evidence, no facts, just assumptions, allegations and conclusions based on those allegations nothing more.”

Putin moved on to point out the facts that “Hackers can be anywhere. They can be in Russia, in Asia…even in America, Latin America. They can even be hackers, by the way, in the United States, who very skillfully and professionally, shifted the blame, as we say, on to Russia.”

Kelly cannot respond to Putin’s comments rationally largely because she has been living in matrix which excludes practical reason in the political landscape. She has been told what to think. In fact, she has been paid millions of dollars to do just that. Putin again challenged Kelly to think a little deeper about those serious issues:

In other words, even if the silly premise that Russia hacked the DNC were true, then Kelly would still have a hard time explaining why the United States has meddled in Russia’s politics and economy over the past few decades. In fact, it was agents from the US—namely the Chicago Boys and academics at Harvard—that literally destroyed the Russian economy back in the 1990s.[2]

Moving on to the situation in Syria, Putin historically destroyed Kelly. With respect to United States using the so-called rebels to fight Assad, Putin said:

“You use them today, and never know what happens to you tomorrow. They might be fighting you… So, Al-Qaeda was at some point created to fight against the Soviet Union in Afghanistan, and then Al-Qaeda hit the US on September 11.”[3]

Those devastating comments aren’t really glad tidings to New World Order agents, who keep propounding that Vladimir Putin is evil. But it gets worse. The Institute for Gulf Affairs, a Washington-based think tank, has recently released a stunning report documenting that Saudi Arabia has recruited at least 400 ISIS members from the United States. Those people have been studying in the US and they are dual citizens. The report states:

But let us be honest with ourselves here: Putin is different. He does bring something to the political table, and that really angers the New World Order community, which is largely based on group-think.

You may disagree with Putin on many other issues, which is perfectly legitimate. But the fact is that he is making New World Order agents mad. Putin has framed his political worldview on Logos, and Christianity in particular, and the New World Order hates both.

[4] Ali al-Ahmed and Mohamed Dhamen, “From American College Campuses to ISIS Camps: How Hundreds of Saudis Joined ISIS in the US,” Institute for Gulf Affairs, May 30, 2017.