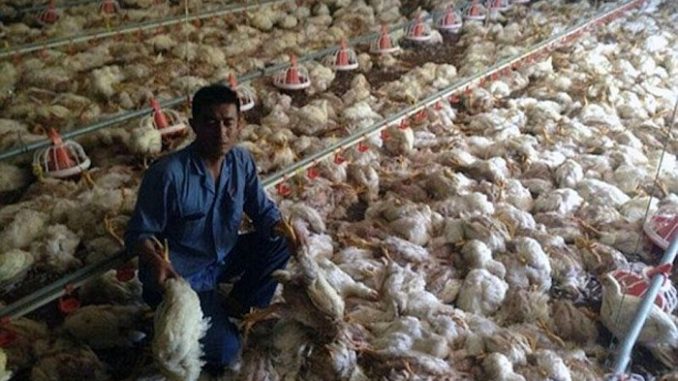 The U.S. Department of Agriculture recently gave the green-light to four chicken processing plants in China, allowing chicken raised and slaughtered in the U.S. to be exported to China for processing, and then shipped back to the U.S. and sold to American families.

The new law, designed to cut costs, has food safety experts claiming the authorities are “gambling unnecessarily” with Americans’ health.

“All this means is that we’ve deemed China’s poultry processing equivalent to the process in the United States,” confirmed Arianne Perkins, USDA public affairs specialist. Individual companies will still have to be certified, something Perkins says has not happened yet.

China has been the source of multiple serious food safety scares in recent years, raising serious questions about whether China can be trusted with our chicken. In 2013 alone:

In March 2013, over 15,000 dead pigs had been found drifting down Huangpu River, caused by a crack-down on illicit pig-trade in Zhejiang. As reported by Shanghaiist, local pork dealers would buy up dead meat unfit for sale, process it in illegal workshops, and then re-introduce the products into the legal market.

In May 2013, the Ministry of Public Security released a press statement warning Shanghai consumers of lamb meat that inadvertently may have been, or contained, rat, fox or mink meat. According to some sources, respective fake lamb meat also reached Yum-owned “Little Sheep” hot pot chain restaurants, though Yum itself declined these rumors.

In June 2013, Wenzhou police shut down 10 underground mills in Zhejiang’s Cangnan County, and additionally seized large amounts of chemical additives and coloring agents, which were used to clean out-of-date (expired) chicken drumsticks and wings, ducks’ heads, and duck meat prior to re-selling them to the public.

In September 2013, according to JRJ and Shanghaiist six workshops near Xi’an, Shaanxi, have been shut down that produced fake beef by mixing pork with chemicals, such as paraffin wax and industrial salts.

In October 2013, cat meat, slaughtered at a “black” slaughterhouse in Huai’an City near Shanghai, was sold to butchers and local markets under the guise of “rabbit”. Some of the cats were kept alive and shipped to the southern provinces of Guangdong and Guangxi where they were sold for around 10 yuan ($1.50) per animal.

Is this a country we should be trusting with our chicken?

Shape.com reports: The logistics are hard to imagine—if we can’t safely leave chicken out for the length of a family picnic, how can it be shipped halfway around the world and back with no ill effects?—the USDA is doing its best to reassure both chicken farmers and consumers that the process is 100-percent safe.

“The Food Safety and Inspection Service’s number-one priority is always food safety,” Perkins says. In the official memo, the FSIS says that “all outstanding issues have been resolved”—a pretty big promise considering that in the past year alone China has made news for passing off rat meat as mutton, selling sausages filled with maggots, inexplicably finding thousands of dead pigs floating in the waters of Shanghai, and even having an outbreak of the H7N9 bird flu in live poultry.

“We do have a concern about safety,” National Chicken Council senior vice president Bill Roenigk said in a statement. “But we’ve been assured and reassured by the USDA that they will do 100-percent testing on poultry products from China. We have confidence that the USDA will do that testing and do it in a good and adequate manner.”

However Perkins adds that while there will be increased testing on the chicken before re-entering the U.S., they will not be doing any on-site monitoring or testing in China, a fact that Rep. Rosa De Lauro (D-Conn.) said in a statement is “deeply worrisome” for American consumers.

Even worse, a report just this month from the United States Government Accountability Office found that the USDA’s domestic poultry inspections have a lot of problems anyhow, as they are in the process of replacing certified-USDA inspectors with those provided by the poultry companies themselves.

In addition to the concerns that this decision could open the door for even more unsafe practices, no country-of-origin labels are required under the new rules, so consumers won’t know where their bird is coming from. Plus industry insiders warn that the move is politically motivated by a desire to get China to re-allow lucrative U.S. beef imports and will likely lead to allowing imports of Chinese chickens, a practice that’s been banned since bird flu and other food safety concerns first surfaced.

All of this has many recommending to buy local so you know your dinner is safe and 100-percent all-American.