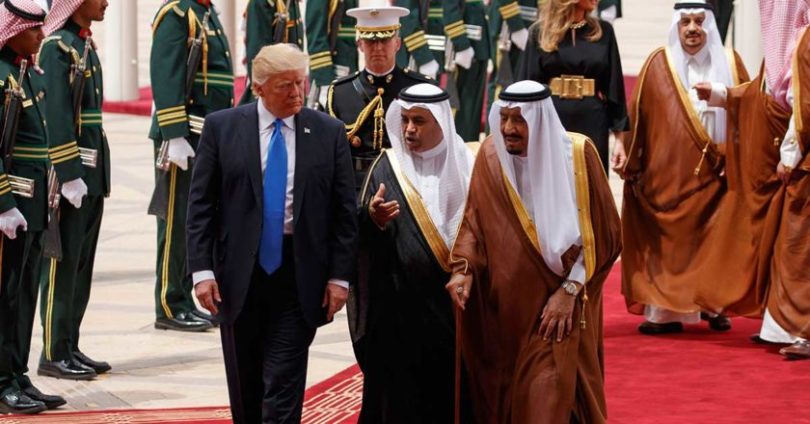 Donald Trump also returned to a popular campaign theme, insisting that US intervetion in the middle east has caused nothing but harm

Donald Trump made a startling admission in a speech to his supporters in Iowa earlier this week.

The US president continued his unique brand of personal communication with the American electorate by holding a rally in Cedar Rapids, Iowa on Wednesday.

Near the conclusion of his speech to an enthusiastic crowd, Trump turned to discussion of his first foreign tour, which saw him meeting with the heads of 54 Muslim countries in the Saudi capital of Riyadh:

It may have been a slip by Trump, who is known for generous ad libbing during speeches.

But he clearly accused Saudi Arabia of complicity in terror funding – something for which Qatar is currently under fire after Riyadh and several allies threw the small Gulf emirate under the bus.

The United States, not to mention the world at large, has known about the Saudi support for radical Islamic terror for quite a while.

The failure of Washington to condemn the Wahabist Saudis’ role, while pointing the finger solely at Qatar (which certainly is also guilty), has been a glaring omission.

Continuing his speech, Trump appeared to backtrack slightly, saying the Saudis were now the ones fighting terror, but then appeared to extend responsibility to the entire Islamic world:

He then emphasized that in fact, the main point of the trip was actually not economic, but precisely to let those nations know that the status quo on ISIS support had to change:

Earlier in his address, Trump had strongly reiterated his campaign rhetoric, decrying the havoc caused by decades of US military intervention:

Needless to say, Trump’s rhetoric is at odds with Pentagon policy, which seems to have changed little since the turnover in administrations. There is clearly a discrepency between the US president’s views and the deep state’s demands.

Whether anything will come of Trump’s talk with the Saudis is questionable. Most likely, they will continue exporting their radical brand of Islam while they seek to lay blame solely on Qatar as the scape goat.

But at any rate, reports of the death of “anti-establishment Trump” appear to have been greatly exaggerated.