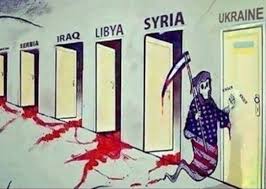 Michael MacDonald: “As [the Neocons] were mocking Clinton in the late 1990s as cowardly for his caution in the face of Saddam’s brutality, central Africa was engulfed in war and chaos. Around 5,400,000 people, mostly in Congo, perished in the convulsions and the starvation and disease they caused from 1998 to 2003. Yet the Weekly Standard, a reliable guide to neoconservative priorities, published just two stories on Congo during these years.”

Manquehue Institute for Strategic Studies: Ayatollah Khomeini once said “international Zionism is using the United States to plunder the oppressed people of the world.” How does this statement relate to today’s world?

Jonas E. Alexis: First, we need to place the Khomeini statement in its historical context. Khomeini articulated the term the “Great Satan” in 1979 largely because he himself witnessed what “international Zionism” was doing to several countries in the Middle East and the West. We must keep in mind that the Anglo-American coup in Iran took place in 1953, and it seemed to vindicate what Khomeini was saying.

“There is no crime America will not commit in order to maintain its political, economic, cultural, and military domination of those parts of the world where it predominates,” Khomeini said back in 1979.[1] “By means of its hidden and treacherous agents [i.e., the Neoconservatives and other warmongers], it sucks the blood of the defenseless people as if it alone, together with its satellites, had the right to live in this world. Iran has tried to sever all its relations with this Great Satan and it is for this reason that it now finds wars imposed upon it.”[2]

This uncomfortable but true statement is still relevant today. Just take a look at how John McCain and Lindsey Graham are toe-dancing around important issues and perpetuating the idea that America needs to overthrow Bashar al-Assad and get into conflict with Russia. Just take a look at how the Neoconservatives have overwhelmingly taken over U.S. foreign policy.[3] These people are completely mad. Khomeini wouldn’t mind calling them Satanists.

It must also be noted that these people don’t care about America or its people at all. They only care about fulfilling an essentially satanic enterprise, which is congruent with the “Greater Israel.” As my dear friend Vladimir Golstein of Brown University has put it, the Neocons are incapable of understanding reality.[4] In that sense, they cannot flesh out a coherent system without falling into their own trap. Scholar Michael MacDonald has documented:

The fact that Khomeini brought “international Zionism” to the fore indicates that his target was not decent Americans who virtually have no clue of what is really going on; Khomeini’s target was “international Zionism,” which we all know has sucked the blood out of Palestinian men, women and children and spit out the human bone. This has been going on since 1948. And if 1948 is too far in the past, then Iraq, Afghanistan, Libya, Pakistan, Yemen, and Syria should be case studies for modern observers and scholars. In fact, Israeli historian Benny Morris unequivocally declared:

Morris is also the author of the Cambridge text The Birth of the Palestinian Refugee Problem, 1947-1949, in which he documents throughout that raping Palestinian girls and women was rampant in 1948.[7] Other Jewish scholars such as Ilan Pappe have documented the same thing.[8]

Manquehue Institute for Strategic Studies: Some governments in the Middle East are expanding their ties with Israel. Are they betraying the Palestinian cause?

Jonas E. Alexis: Absolutely. That Israel was built on raping, pillaging, and plundering Palestinian men, women and children is just a historical fact. But the problem is that Israel has no intention of collaborating with the Palestinians in order to bring about peaceful resolutions in the Middle East. They want to expand their territories far and wide, as we are observing with the settlements issues. As Israeli politician and Minister of Justice Ayelet Shaked put it, “Who is the enemy? The Palestinian people.”[9]

This is not some isolated case. Israeli officials since 1948 have said similar things. Former IDF Chief of Staff Raphael Eitan declared way back in the 1980s: “We declare openly that the Arabs have no right to settle on even one centimeter of Eretz Israel….Force is all they do or ever will understand. We shall use the ultimate force until the Palestinians come crawling to us on all fours.”

Can you imagine a Muslim country saying these disgusting things and getting away with it? Wouldn’t the Zionist media beat the masses over the head with those statements? Moreover, shouldn’t homosexuals in America and much of the West be upset about Ben-Dahan degrading them here? Doesn’t organized Jewry in America tell us ad nauseam that homosexuality is a great thing? Why doesn’t the same organization reprimand Ben-Dahan for his racist views? You see, it doesn’t make sense for countries in the Middle East to collaborate with Israel while the Israeli regime does not want to abide by practical reason and even international law. Incidentally, Khomeini also that Israel was pitting Muslim countries against each other. As E. Michael Jones puts it,

“In 1979 the Ayatollah Khomeini felt that Islam could provide a united front against the Great Satan. By 1980 it had become clear that America was using its leverage with the Saudis and the Egyptians to divide Islam, and lure the Wahabbis and their Pakistani allies into an alliance against the Soviet Union, which had just invaded Afghanistan. Khomeini saw what was happening, but was powerless to stop it. In a speech to pilgrims which he delivered on September 12, 1980, Khomeini claimed that at the very moment when Islam was about to unite:

“‘the Great Satan has summoned its agents and instructed them to sow dissension among the Muslims by every imaginable means, giving rise to hostility and dispute among brothers in faith who share the belief in tauhid [unity].

“‘So that nothing will stand in the way of complete domination and plunder. Fearing that the Islamic Revolution of Iran will spread to other countries, Muslim and non-Muslim alike, and thus compel it to remove its foul hands from the lands it dominates, the Great Satan is resorting to another stratagem now, after the failure of both the economic boycott and the military attack It is attempting to distort the nature of our Islamic Revolution in the eyes of Muslims throughout the world in order set the Muslims at each others’ while it continues its exploitation of Muslim countries.

“‘Thus it is that precisely at the time Iran is waging a determined struggle to ensure the unity of all Muslims in the world on the basis of tauhid and true Islam, the Great Satan gives its orders to one of its pawns in the region, one of the dead Shah’s friends, to obtain decrees from Sunni fuqaha and muftis to the effect that the Iranians are unbelievers.’”[13]

If governments in the Middle East want to expand their ties with Israel, then they must challenge Israel to abide by the moral and political order, which is our defense against any diabolical regime. Israeli officials have been getting way with terrorist activities for far too long, and it is high time that both governments in the Middle East and the West work together in order to challenge the Israeli regime. If Hegel and Solzhenitsyn are right, that truth will triumph in the end, then the Israeli regime is on the wrong side of history.

[1] Quoted in E. Michael Jones, “The Great Satan and Me: Reflections on Iran and Postmodernism’s Faustian Pact,” Culture Wars, July/August, 2015.

[9] Ishaan Tharoor, “Israel’s new justice minister considers all Palestinians to be ‘the enemy,’” Washington Post, May 7, 2015.

[11] Philip Weiss, “Netanyahu deputy charged with administering Palestinians says they are ‘beasts, not human,’” Mondoweiss.com, May 9, 2015.

[13] Jones, “The Great Satan and Me: Reflections on Iran and Postmodernism’s Faustian Pact,” Culture Wars, July/August, 2015.