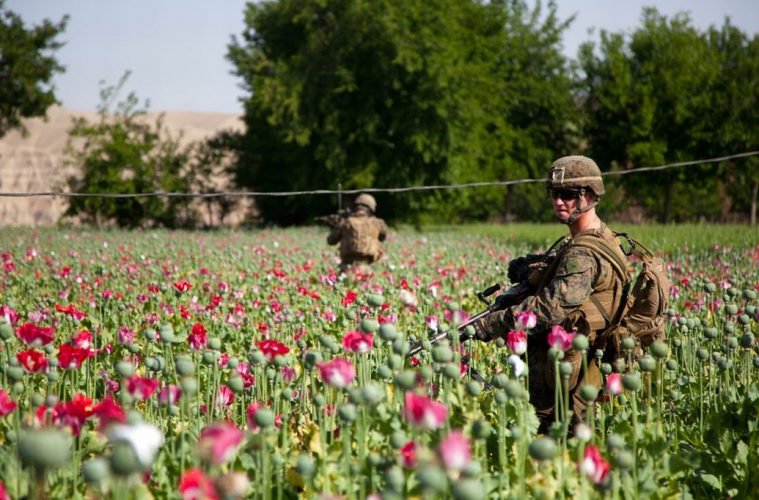 If you’re familiar with the American war on drugs, then it may not surprise you to learn that the CIA represents one of the largest drug dealing organizations in history.

The CIA originally designed LSD with the help of a Swiss manufacturer as a “mind control drug” as part of their MK Ultra program, hoping that it would allow patients under the influence to commit unspeakable acts commanded by the government and then forget they ever happened.

Of course, this plan backfired, and then the CIA introduced LSD to the American population.

The CIA is no stranger to money laundering, performing dangerous tests on unwilling patients, and even committing murder over drugs.

One of the drugs the CIA has focused on for decades is heroin, which is created using opium.

The CIA actually owned and operated a covert drug smuggling airline, referred to as Air America, which was used to transport numerous goods, including heroin.

The CIA’s involvement with the opium industry doesn’t just stop there.

The CIA consciously turned a blind eye to the opium trade in Afghanistan in the 1980s, until the Taliban took control and attempted to put an end to production.

The opium industry in Afghanistan, which represented 90% of the world’s opium production, then plummeted.

9/11 occurred only a year later, giving the U.S. a perfect “reason” to invade Afghanistan.

Well, shortly afterwards, the U.S. seized the opium fields and took control of them, and then we witnessed opium production in Afghanistan skyrocketing again.

It’s clear that the U.S. government has an opium problem, one that’s likely making them a lot of money in the process.

What Is Air America?

No, I’m not referring to the hit 1990 movie starring Mel Gibson and Robert Downey Jr., though that movie arguably contained more fact than fiction.

The movie was centred around the CIA’s private airline, Air America, which was used during the Vietnam War to transport food, supplies, and other items, which happened to include opium.

Those parts of the movie were actually correct, and it seems that the CIA-operated airline was in fact used to smuggle drugs.

In Southeast Asia (SEA), during the Vietnam War, the CIA worked alongside Laotian general Vang Pao in an effort to help make Laos the world’s largest exporter of heroin.

The CIA then flew drugs all over SEA, allowing the Golden Triangle (parts of Burma, Thailand, and Laos) to become the world hub for heroin.

Agents from the Bureau of Narcotics and Dangerous Drugs managed to seize an Air America aircraft that contained large amounts of heroin, but the CIA ordered the agents to release the plane and halt any further investigations.

The CIA wasn’t just involved with the transportation of the drugs, however. The heroin was refined in a laboratory built at the CIA headquarters in Northern Laos.

After about a decade of U.S. military intervention, SEA represented 70% of the world’s opium supplier.

Unfortunately, many of the operatives became addicted to the heroin themselves. At the same time, SEA also became the main supplier of raw materials for the U.S. heroin industry.

Though Air America apparently stopped operations in 1976, the CIA’s involvement in the opium and heroin industries continued in other parts of the world.

Though the CIA’s website still denies that Air America was used to transport drugs, this is no longer a conspiracy theory.

Mainstream media has even addressed this issue, as the History Channel just came out with a new series titled America’s War on Drugs, which so far has addressed fairly accurate information regarding the war on drugs, including Air America’s role in transporting heroin (at least within the first two episodes that were released this week).

According to a New York Times article written in 1993, the CIA’s involvement with the heroin industry began slightly before the Vietnam War.

During the Korean War, in 1950, the CIA allegedly traded weapons and heroin in exchange for intelligence.

Well, it seems the CIA’s “heroin problem” didn’t start nor end in SEA.

The Reporter Who Broke the Story of CIA Involvement in Drug Smuggling Found Dead – It was ruled a suicide, even though he was shot twice in the head.

The U.S. Government’s Role in the Afghan Heroin Trade

Afghanistan is another country with a complicated history of involvement in the opium and heroin industries, much of which implicates the CIA.

In the 1980s, CIA-supported Moujahedeen rebels were heavily involved in drug trafficking heroin. The CIA supplied trucks and mules, which were used to transport opium.

Despite the fact that Afghanistan supplied approximately 50% of the heroin used by Americans, the U.S. failed to intervene or investigate the Afghan drug industry for years.

Instead, many of the individuals trafficking the drugs in Afghanistan were actually trained, armed, and funded by the CIA at the time.

Opium production came to a gradual halt thanks to Taliban rule.

By 2000, the Taliban had completely banned opium production, practically eradicating 90% of the world’s heroin.

The following UN diagram outlines the history of opium production in Afghanistan:

There have been tons of photos of U.S. soldiers guarding the opium fields, yet today, more than a decade later, they still have not destroyed them (view some of the photos here).

Meanwhile, a propaganda campaign by the Bush administration promised to destroy all drugs and assured zero drug tolerance, as the American war on drugs continued.

Throughout the Nixon, Reagan, and Clinton eras, the public had already witnessed multiple presidents promising to crack down on drug use, which turned out to be a giant sham to mass incarcerate Americans, primarily blacks and hippies.

While these presidents were promising to put an end to different drug epidemics, they were actually fuelling them, as the CIA and other forms of law enforcement were heavily involved in the drug trade.

Alexander: As a matter of fact, two former US Presidents – George Bush and Bill Clinton – have been part of the largest drug smuggling operations in US’ history.

It’s no secret that 9/11 was an inside job, otherwise referred to as a false-flag terrorist attack. If you didn’t know that, please read this CE article.

So, this begs the question: Given that Afghan opium production skyrocketed once the U.S. invaded the country…

Was Opium One of the Motives Behind 9/11?

It was President Richard Nixon who originally started promoting the “law and order” mentality the elite are still pushing now, and Nixon was also the one who waged a “war on drugs” in 1971.

Disguised as a tactic to decrease drug usage, this was actually a strategy to incarcerate people by the masses, particularly black citizens.

Between 1970 and 1980, the U.S. prison population increased from around 300K to 500K. The irony was thick, as it was the CIA who was introducing some of these drugs onto the streets in the first place.

The war on drugs continued for decades, and by 2000, the U.S. prison population had almost doubled, skyrocketing to over 2 million as a result of these new drug laws.

As long as more drugs were on the streets, presidents were able to conduct these propaganda campaigns against drugs and reap the benefits.

At the same time, corporations were making a killing off the privatization of the prison system, and so it was a win-win for the both of them.

The elite were also apparently pleased, as it was a Rockefeller who proposed the “15 years to life” rule in the first place.

However, the Taliban then took over Afghanistan, decreasing the opium and heroin on the streets of America (except for what Big Pharma was still providing).

The CIA is no stranger to drug trafficking, so it’s possible they saw this as an opportunity to commit a false flag terrorist attack in order to justify the invasion of Afghanistan so they could take over the opium drug trade.

The motive would make sense, as the American war on drugs was still an issue in 2001.

The CIA already had ties to this area, as the CIA created, trained, and funded “Al Qaeda/Taliban” during the Mujahideen.

Ask yourself: If the U.S. government were actually against these organizations, then why are they still funding them?

“It is documented that prior to 2011, there was a process of recruitment of mujahideen to fight in Syria, and this was coordinated by NATO and the Turkish high command.

“This report is confirmed by Israeli news sources and unequivocally, we are dealing with a state-sponsorship of terrorism, the recruitment of mercenaries, the training and the financing of terrorism.” – Dr. Michel Choissudovsky (source)

Congresswoman Tulsi Gabbard was quoted as saying that the “CIA has also been funneling weaponsand money through Saudi Arabia, Turkey, Qatar and others who provide direct and indirect support to groups like ISIS and al-Qaeda.

“This support has allowed al-Qaeda and their fellow terrorist organizations to establish strongholds throughout Syria, including in Aleppo.”

It’s certain that 9/11 was an inside job, but the entire truth behind the motive is still undetermined.

The opium theory seems to be a strong possibility, but of course the elite had their own agenda and the U.S. government had other motives as well.

The only thing that is considered to be fact is that 9/11 was a controlled demolition, and that the war on drugs in America was a propaganda campaign.

Who knows if the two are related, but it seems to me that this is a potential link!