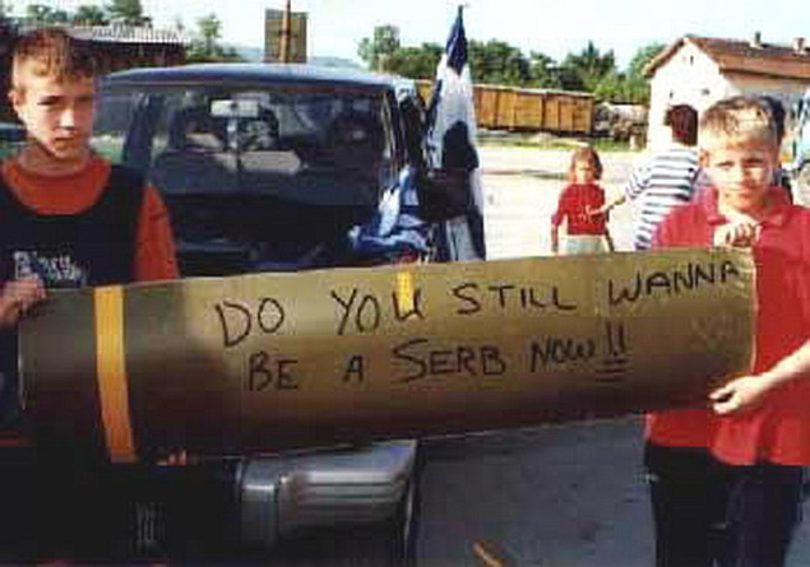 The 1999 NATO attack on Yugoslavia was unambiguously a war crime and a totally devastating one at that. The Serbian people have still not received any justice after suffering under NATO’s multiple acts of war criminality.

The Serbian Royal Academy of Scientists and Artists has put together a legal team in order to sue NATO in an international court for crimes against humanity.

The lawsuit relates to NATO using depleted uranium during its illegal war on the Federal Republic of Yugoslavia, Serbia being the largest part of the now destroyed state.

The illegal war led to the death of 2,000 civilians, including 88 children. The real refugee crisis it caused still continues to this day as the illegal occupation of the Serbian province of Kosovo and Metohija has seen the ongoing displacement of thousands of Serbian families.

The war was not only illegal, but was deeply immoral. In the 1990s, Yugoslavia, one of the most successful multi-cultural states in modern history began struggling for its survival after foreign powers ranging from the US, UK, Germany, Saudi Arabia,Turkey and others began funding various insurgent movements including far-right Croatian militants nostalgic for Hitler’s State of Croatia as well as radicalised Bosniaks who adopted political Islamism to varying degrees after decades of  secular government.

In 1999, NATO decided to finish Yugoslavia off by attacking Serbia and Montenegro in support of the terrorist organisation KLA whose predecessor groups had been committing atrocities against Serbian people since the 1980s, though matters got far worse in the 1990s when the group coalesced into the modern pro-Albanian terrorist group.

It is important to remember that while Serbian people, Serbian homes and Serbian Orthodox churches were major targets of the KLA and later NATO, the KLA also began to target Yugoslav Albanians who refused to cooperate in the killing of their neighbours. After all, Albanians living in Yugoslavia were living in a state with far higher living standards than Albania which in the 1990s transitioned from an isolated dictatorship to a chaotic civil-war torn mafia state.

Yugoslavia was one of the few states apart from the Soviet Union to mobilise against fascist aggression in the 1940s. In 1804, Serbia was also the first southern European state to declare its sovereignty from Ottoman Turkish colonialism, even before Greece.

NATO’s own charter was violated by the illegal act of aggression against Yugoslavia as NATO was supposed to be a defensive alliance and neither Yugoslavia nor Albania, the effective mother-state of the terrorist KLA, were members of NATO in 1999.

The propaganda from the west used to justify the NATO act of aggression still remains largely unchallenged in the west. They painted Yugoslavia which was fighting a terrorist insurgency as an aggressor and the terrorists as freedom fighters, in spite of the fact that for the vast majority of the 1990s, even the United States officially regarded the KLA as a terrorist group.

The after-effects of the war continue to linger. In the years since 1999, Albania has gone from a hyper-corrupt mafia state to a state where ISIS has taken control of much of the lucrative narcotics trade, a trade which represents half of Albania’s GDP.

While the west closes its eyes, Albania has become a perfect storm of local mafioso, the anti-Iranian terrorist group MEK and ISIS itself. Even the Washington Post now admits that many Albanians have joined the ISIS fight against Syria and Iraq.

The worst elements of the contemporary Albanian terrorist, human trafficking, drug trafficking and weapons trafficking problem are in the occupied Serbian province of  Kosovo and Metohija which since the 1999 NATO war has acted as a kind of satellite province of Albania under the guise of NATO recognised unilateral independence.

NATO clearly has much to answer for, but international justice has not been particularly fair to Serbia and Serbian people. The International Criminal Tribunal for the former Yugoslavia at The Hague has notoriously ignored the crimes of Albanians, Bosniaks and Croatians whilst throwing the book at many Serbs whose role in the wars was tangential and certainly not criminal.

Because of this, one shouldn’t adopt high hopes about the legal case, nevertheless, it is an important move that may help to highlight NATO’s crimes against humanity and moreover NATO’s role in once again helping to create a terrorist element, this time in Europe.

Was this some sort of sick payback for Yugoslavia’s heroic fight against Hitler? Many in southern Europe increasingly see it this way, as the only planes which bombed Yugoslavia prior to NATO were those of fascist Germany.