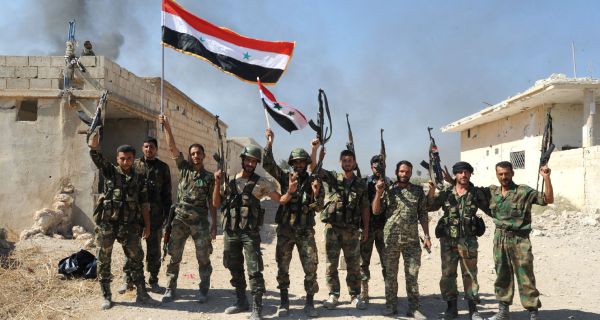 America has stopped attacking Syrian forces near the Jordanian border and has held back its jihadists. Many are suspecting that a deal has been reached with Russia.

The Syrian Arab Army has been making strong and swift advances through the deserts of southern Syria near the Jordanian and Iraqi borders and are all ready moving north on Deir ez-Zor, one of the last major terrorist strongholds in Syria.

“Backed by Russian airstrikes, the Syrian Arab Army and their allies stormed the Islamic State’s positions at the Talilah Reserve, inflicting heavy damage on the latter’s positions.

Following a short battle on Friday afternoon, the Syrian Arab Army and their allies liberated the Talilah Reserve in eastern Palmyra, pushing their way to the strategic Talilah Crossroad”.

This comes after Russian Colonel General Sergey Surovikin issued a stern criticism of the US which has attacked three Syrian and allied military convoys in southern Syria between May and June of 2017.

Since that statement was issued, not only has the United States ceased its attacks on Syrian forces in southern Syria, but more interestingly, the US has not seemingly allowed the jihadists under its control to attack Syrian forces.

Some, including Arab journalist Leith Abou Fadel have found cause for celebration in recent developments,

Some have suggested that a secret deal  between the US and Russia has been struck, whereby the US will allow the Russian Aerospace Forces to clear important roads for Syria and its allies on their way to Deir ez-Zor while not allowing pro-America jihadists on the ground to interfere with the progress of Syrian allies, including Hezbollah who have helped to cut remaining US backed jihadists off from the Syrian march east and north.

It is certainly too early to say whether any such deal between Russia and the US has been struck, but the suggestions which are being taken rather seriously in some quarters of Arabic social media ought to be considered.

The US would nominally have no reason to do a military policy about-face in respect of hampering the progress of Syrian forces in southern Syria. For months now, the US has done the opposite.

There is the possibility that in a rare moment of pragmatism, American commanders were ordered to not interfere in the forward movements of Syrian forces after both Russian Colonel General Sergey Surovikin and Russian Foreign Minister Sergey Lavrov issued stern condemnations to the US for impeding the fight against ISIS by firing on anti-terrorist troops.

In some ways it is odd that after months, in many ways years of Russia warning the US to stop siding with terrorists in Syria, that suddenly the US would listen, at least in one region of Syria, albeit an increasingly strategically important one.

But if America has listened or more important if they have engaged in constructive dialogue with Russia, it could well be an admission that America’s plans for a Salafist Syria have been fully thwarted and America is resigning itself to this new reality.

It is indeed becoming increasingly likely that the only piece of the much coveted Syrian pie that America might be able to get its hands on will be Kurdish regions in the north of the country. After holding back its jihadists in southern Syria, the Kurdish led SDF seems to be the only consistent group which America is relying on in order to achieve its ambitions in Syria.

There is still a danger that America will argue for some kind of pro-Kurdish partition of the country when all is said and done, but at least when it comes to funding jihad, America has indeed taken a big step back, something which is after all, in line with Donald Trump’s initial post-election Syria strategy which was focused not on regime change nor on funding Arab jihadists but based on exclusively arming and aiding secular Kurdish fighters.

Whether this is a new reality or simply a temporary ceasefire on America’s part is still anyone’s guess, but the fact that America has suddenly shifted its approach in southern Syria, hot on the heels of a Russian admonition, is a further indication of who really is the more influential of the super-powers which are fighting on opposite sides in Syria.