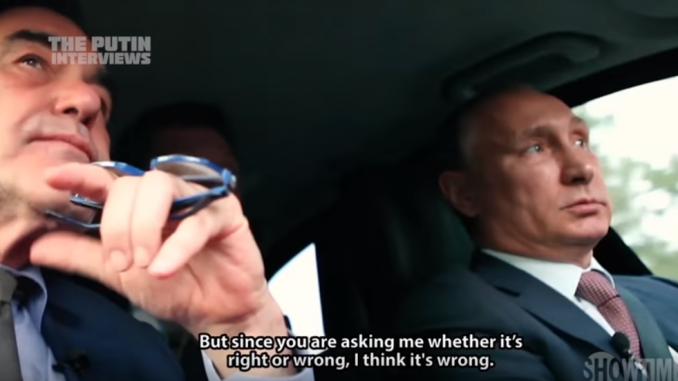 President Putin when quizzed on whistle-blower Edward Snowden tells Academy Award winning film-director/screenwriter Oliver Stone that he believes “Snowden is not a traitor.”

Showtime has released the first trailer of a four-part special documentary The Putin Interviews, that will premier on 12 June.

Putin tells the controversial director of JFK, Natural Born Killers, Nixon and Platoon that he disapproves of Edward Snowden’s decision to leak troves of confidential files. “What he did was wrong” but he is “not a traitor.“

Promoted as “the most detailed portrait of Putin ever granted to a Western interviewer”, The Putin Interviews spawned from several encounters over two years between Stone, director of politically oriented films including JFK and Nixon, and Putin. The interviews are to air as four one-hour installments, landing just a week after Kelly’s discussion with Putin, the centerpiece of her news magazine show on NBC, which premieres on Sunday night.

In the extended clip released on Thursday, Stone and Putin can be seen driving in a car with an English translator in the backseat, discussing topics such as Edward Snowden’s whistleblowing and Russian intelligence. “As an ex-KGB agent, you must have hated what Snowden did with every fiber of your being,” Stone asks in the clip.

“Snowden is not a traitor,” Putin replies. “He did not betray the interests of his country. Nor did he transfer any information to any other country which would have been pernicious to his own country or to his own people. The only thing Snowden does, he does publicly.”

Stone, whose 2016 film Snowden detailed the rise and fall of the whistleblower, goes on to ask Putin about his own intelligence activities, and though the clip features no overt references to rumors of Russian meddling in the 2016 US election, Stone can be seen asking Putin about hacking in the special’s official 30-second trailer.

“I think they’re working quite well,” Putin says of Russian intelligence. “Our intelligence services always conform to the law. That’s the first thing. And secondly, trying to spy on our allies if you really consider them allies and not vassals is just indecent. Because it undermines trust. And it means that in the end, it deals damage to your own national security.”