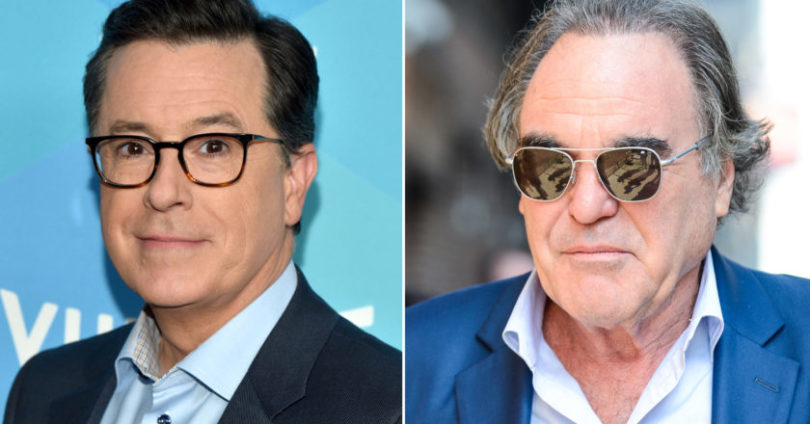 by By Jonas E. Alexis

Do we have enough evidence which points to the idea that Israel has been meddling in U.S. elections and foreign affairs? Yes. 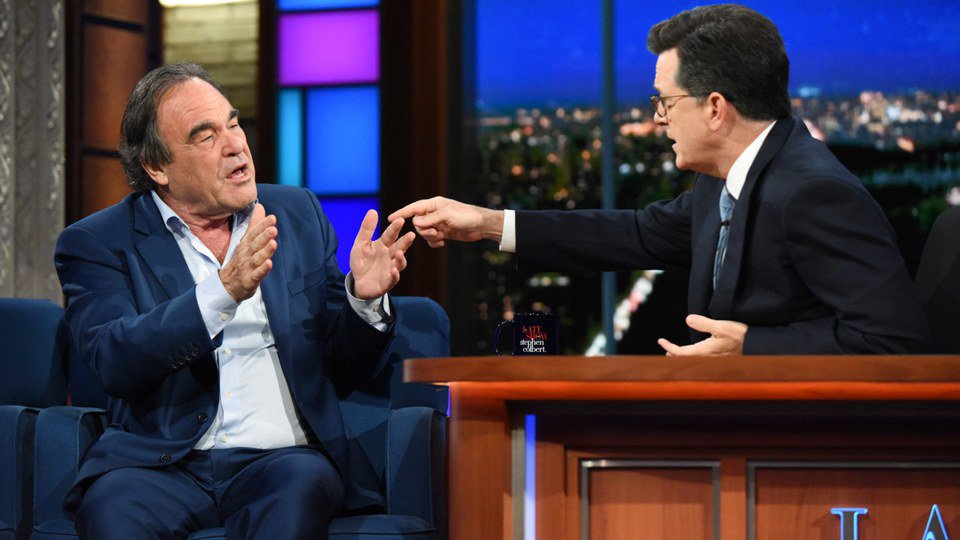 Oliver Stone probably didn’t know that he was attacking the Neoconservative hawks, warmongers, and ethnic cleansers in Washington when he told Stephen Colbert that “Israel had far more involvement in the US election than Russia.”[1]

That statement indeed was a political bomb, and it almost certainly took Colbert by surprise. In response to this claim, the Jewish Press declared:

“Stone was obviously pulling the old anti-Israel, leftist line about how AIPAC is controlling Washington (much the way the ‘Jews’ control Hollywood) – and in his haste to save face apparently forgot the difference between contributing to political campaigns and hacking DNC computers.”[2]

Well, obviously Stone stroke a nerve, for we all know by now that AIPAC has had and continues to have a tremendously powerful influence on U.S. foreign policy. Once again, this is not conspiracy stuff. The scholarly studies on this issue are just an embarrassment to riches:

Michael Isikoff and David Corn, Hubris: The Inside Story of Spin, Scandal, and the Selling of the Iraq War (New York: Random House, 2006).

But the simple question is this: do we have enough evidence which points to the idea that Israel has been meddling in U.S. elections and foreign affairs? Yes.

In 1987, Jewish American Jonathan Jay Pollard was sent to prison for life for spying for Israel. In 1995, Israel publicly denied that Pollard was a spy, but recanted that statement three years later. BBC News itself declared,

“Israel has officially acknowledged for the first time that an American Jew, Jonathan Pollard, who was arrested in the United States 13 years ago, was one of its spies. Pollard, a former intelligence analyst for the United States Navy, is serving a life sentence in North Carolina for passing classified military documents to Israel. Until now, the Israeli authorities had always denied that Pollard was working under their direction.”[3]

For years the Israelis “refused to tell the United States what Pollard gave them.”[4] Then in 2010 Netanyahu made it clear that Pollard was an Israeli spy who was working for the Israeli government, “for which Israel took full responsibility.” Yet even after this admission, Ambassador Michael Oren said he hoped for Pollard’s earliest release.[5]

In 2005, Steve J. Rosen and Keith Weissman, who served for twenty-three years as top officials for American Israel Public Affairs (AIPAC), were accused of similar charges. As the trial was nearing, both the Israel Lobby and the defense team “described the proceedings as a frame-up, the result of an intra-bureaucratic struggle within the government, and a plot by anti-Semites in Bush’s Justice Department to carry out a Washington pogrom.”[6]

Neither man was convicted, thanks again to their Jewish friends: “While most of the more cautious elements in the Jewish community are staying well away from this case, the radicals, such as Rabbi Avi Weiss and his AMCHA Coalition for Jewish Concerns, who have previously devoted their efforts to freeing Jonathan Pollard, have now turned their attention to Rosen and Weissman.”[7]

Neoconservative Daniel Pipes declared that “we worried about the ramifications for us [meaning Jews] if [Rosen] were found guilty.”[8] He ended the article by congratulating both Rosen and Weissman. Pulitzer winner Dorothy Rabinowitz also praised them, characterizing their actions as “activities that go on every day in Washington, and that are clearly protected under the First Amendment.”[9]

The implication seems to be that Americans spying for Israel are protected by the First Amendment. In fact, “several prominent Neocons have been investigated on credible charges of spying for Israel: Perle, Wolfowitz, Stephen Bryen, Douglas Feith, and Michael Ledeen.”[10]

“In 1970 Perle was recorded by the FBI discussing classified information with the Israeli embassy. In 1981 he was on the payroll of an Israeli defense contractor shortly before being appointed Assistant Secretary of Defense for International Security Policy…During his tenure in the Reagan administration, Perle recommended purchase of an artillery shell made by Soltan, an Israeli munitions manufacturer…

“At the present time, Perle is on the board of directors of Onset Technology, a technology company founded by Israelis Gadi Mazor and Ron Maor with research companies and investment funds. He was also a close personal friend of Israel Prime Minister Ariel Sharon.”[11]

Similarly, “Feith has been suspected of spying for Israel. In 1972 Feith was fired from a position with the National Security Council because of an investigation into whether he had provided documents to the Israeli embassy. Nevertheless, Perle, who was Assistant Secretary for International Security Policy, hired him as his ‘special counsel,’ and then as his deputy. Feith worked for Perle until 1986 when he left government service to form a law firm, Feith and Zell, which was originally based in Israel and best known for obtaining a pardon for the notorious Marc Rich during the final days of the Clinton administration.”[12]

In 1997, Army tank engineer David A. Tenenbaum “gave classified military information on Patriot missiles and armored military vehicles to Israeli officials,” which was sent “to every Israeli military liaison official posted to the command over the last 10 years.”[13]

The Israel government, of course, “denied that any inappropriate activity had taken place.”166 David Bar Illan, chief spokesman for Prime Minister Benjamin Netanyahu, put out a statement, saying, “There has been no improper contact between Tenenbaum and anybody or institution of the Israeli Government.” According to the affidavit, “Tenenbaum admitted to divulging non-releasable classified information to every Israeli liaison officer.”[14] So Tenenbaum admitted, but Israel denied.

Justin Raimondo writes that if Rabinowitz is right in saying that the actions of Jewish spies are covered by the First Amendment, then “we are all in big trouble,” since it would mean that organized Jewry is betraying the American people. In 2004, the FBI came to the same conclusion.[15] In fact, in 2003 the FBI decided not to hire Jews for Arabic translation jobs, since they tended to present an opposite story of the actual event.

In 2004, a former intelligence official who was familiar with the latest FBI probe and who had recently left government work told the Los Angeles Times, “There is a huge, aggressive, ongoing set of Israeli activities directed against the United States. Anybody who worked in counterintelligence in a professional capacity will tell you the Israelis are among the most aggressive and active countries targeting the United States.”[16]

The shocking fact is that “the FBI has investigated several incidents of suspected intelligence breaches involving Israel since the Pollard case, including a 1997 case in which the National Security Agency bugged two Israeli intelligence officials in Washington discussing efforts to obtain a sensitive U.S. diplomatic document. Israel denied wrongdoing in that case and all others, and no one has been prosecuted.”[17]

Yet World Net Daily, a thoroughly Zionist outlet, accused the FBI of fostering anti-Semitism.[18] Since the Pollard affair, the FBI has suspected Israel of espionage, gathering enough evidence that they had continuing reason for suspicion through to the Clinton administration.[19] Even the Washington Post declares that there were “possible espionage” cases in which Israel was of major concern, especially “among those who translate and oversee some of the FBI’s most sensitive, top-secret wiretaps in counterintelligence and counterterrorist investigations.”[20]

The FBI’s suspicions were firmly based on documentation, considering that they had formerly had historical confrontations with Israel and Jewish spies. Even in December of 2008, Israeli traitor Ben-Ami Kadish, then 85 years old, was arrested and pleaded guilty for passing classified documents to Israel in the 1980s. To Judge William H. Pauley III, this was a disgrace to our security, because Kadish should have been charged years ago for many more charges.[21]

Again, in 2009, scientist Stewart Nozette, who worked for years in NASA, was caught spying for Israel. The New York Times article was titled “The Scientist Who Mistook Himself for a Spy.”[22] These acts of disloyalty are quite embarrassing, yet pointing out serious cases in which the United States is being wounded from within by the Israeli regime is like finding yourself in the middle of World War III.

Even in Britain in 2010, senior officials (particularly a senior Mossad agent) in Israel were accused of forging British passports used in a plot to kill a Hamas leader in the United Arab Emirates. “Police in Dubai have already said they are ‘99% certain’ the Mossad was behind Mabhouh’s killing, and [David] Miliband’s remarks represented the first official endorsement of that view by a western government.”[23] Miliband is British Foreign Secretary.

But involvement in espionage is just the tip of the iceberg. Ludwig Fainberg was a notorious mobster; “according to the FBI, he was the middleman for an international drugs and weapons smuggling conspiracy linking Colombian drug lords with the Russian Mafia in Miami. Fainberg’s claim to fame was that in the mid-1990s, he ventured onto a high-security naval base in the far northern reaches of Russia. His mission was to negotiate the purchase of a Russian Cold War-era diesel submarine—complete with a retired naval captain and a twenty-five-men crew—for the Colombian cartel. The price tag: a cool $5.5 million…From 1990 until he was arrested and charged in Miami in February 1997 for smuggling and racketeering, Fainberg ran an infamous strip club called Spoky’s.”[24]

It has also been documented that the Mossad—the Israeli secret service—was responsible for the murder of Jewish media mogul Robert Maxwell. After Jewish journalist Seymour Hersh wrote The Sampson Option: Israel, America and the Bomb, which shows that Maxwell had secret ties with the Israeli secret service, which then decided to do away with Maxwell to prevent him from ever revealing those ties.[25]

In 2001, the FBI charged Irving D. Rubin, chairman of the Jewish Defense League—an organization “whose aim was to defend Jews with ‘all necessary means,’ including the use of violence”[26]—with conspiracy to bomb private and government property, particularly the King Fahd Mosque in Culver City, California, and the office of U.S. Representative Darrell Issa, an Arab-American.[27]

However, Neocon hawks and warmongers have never touched on these vitally crucial issues. Instead of discussing events like these, Neoconservatives prefer to highlight Islamic suicide bombings, keeping the average American’s focus on hating or fearing the Muslim world and away from their own subversive actions at home.

Michael Hoffman points out that “when a Jewish bus is bombed by a Palestinian, graphic photos of the carnage and interviews with survivors are immediately beamed around the world. But when Palestinians are massacred by the Israeli army, the killings are perpetrated in secret, behind the veil of a ‘closed military zone.’”[28] If the Israeli-Palestinian conflict is to be resolved, we cannot afford double standards.

Pointing out terrorism in other countries is one thing, and acting in the manner of terrorism is another issue altogether. Mearsheimer and Walt write:

“Zionists used terrorism when they were trying to drive the British out of Palestine and establish their own state—for example, by bombing the King David Hotel in Jerusalem in 1946 and assassinating UN mediator Folke Bernadotte in 1948, among other acts—and the United States has backed a number of “terrorist” organizations in the past…American presidents have also welcomed a number of former terrorists to the White House (including PLO chairman Yasser Arafat, and Israeli Prime Ministers Menachem Begin and Yitzhak Shamir, who played key roles in the main Zionist terror organizations), which merely underscores the fact that terrorism is a tactic and not a unified movement.”[29]

This brings us to our conclusion: it is really silly to say that Russia is an enemy of the United States when U.S. officials are still making diabolical pacts with the Israeli regime and even Saudi Arabia. It just doesn’t add up, and it is interesting to see that even a person like Oliver Stone is realizing that the press, the media and other news outlets are essentially shooting themselves in the toes when they are not reporting the real thing.

[28] Hoffman and Lieberman, The Israeli Holocaust Against the Palestinians, 66.

One thought on “Oliver Stone: Israel is more dangerous than Russia”