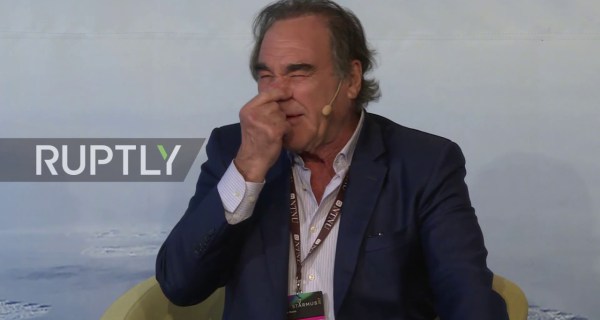 Stone approached Putin in the same way Buchanan approached Nixon during his famous 1982 interview. The results are that both men opened up to the wider world and all but the most fanatical dogmatists can see it.

Imagine a journalist who was scheduled to interview Charles Manson and didn’t ask a single question about the infamous Manson Family Murders? Such a person probably wouldn’t be consider a very good journalist to avoid scrutinising a man famous only for an act of criminality, on that act of criminality.

But what if another journalist is set to interview a head of state about his thoughts, his life and his times? Surely this would be less of a cross-examination that a respectful meeting where a leader is allowed to discuss openly his most compelling thoughts?

Yet from his appearance on the Stephen Colbert Show to press conferences around the world, many are lambasting stone for not putting Putin on trial. How can and why should Putin be put on trial? He committed no crime and has not been charged with any. He is an incredibly popular leader in Russia and one of the most if not the most influential heads of state in the world.

Oliver Stone made his name by making highly provocative and entertaining films, but for his Putin interviews he decided to become a journalist and frankly he is a better one than those who have called themselves journalists dating from a time when Stone only worked in the realm of Hollywood entertainment, albeit, Hollywood entertainment with a very unique narrative in the American context.

Oliver Stone came to Putin with an agenda of neutrality, rather than an agenda based on a pre-conceived narrative.

Those who question why Stone should have betrayed his own vision and pretended to hate President Putin as much as most western liberals do, act as though Putin is never criticised in the west when the opposite is in fact the case.

Western media is filled with hated of and often outright lies about Vladimir Putin on a daily basis. It is Stone who is the outlier among this trend. Yet some of the questions he has been asked are critical of Stone for assuming that Putin is being honest in his on-camera answers. It is quite surreal.

Whatever one’s views are on President Putin, Stone’s method got the most out of his interviewee. It was the Russian President in his own words and anyone watch can form their opinion based on that.

Take for example Patrick Buchanan’s famous 1982 interview with then former US President Richard Nixon. Buchanan who of course worked in the Nixon White House, approached his interviewee from a perspective of respect and personal decency. The result is that Nixon, a man often thought of as deeply guarded and distrustful, opened up to the cameras. The interview went a long way in helping Nixon’s long public rehabilitation from the nadir of 1974.

Whereas Nixon was a controversial leader in the west, Putin doesn’t have anything to do with the west, though many western leaders have sought to have a lot to do with areas of interest to Russia.

Oliver Stone’s approach to Putin was similar to Buchanan’s approach to Nixon. In both cases two men known for being highly intelligence and protective of certain matters ended up speaking freely and honestly. This is what a good journalist does. Buchanan got it done with Nixon and Stone got it done with Putin.

But the mainstream media talking heads of today are not professional interviewers, they are amateur prosecutors going after people who have committed no crimes.