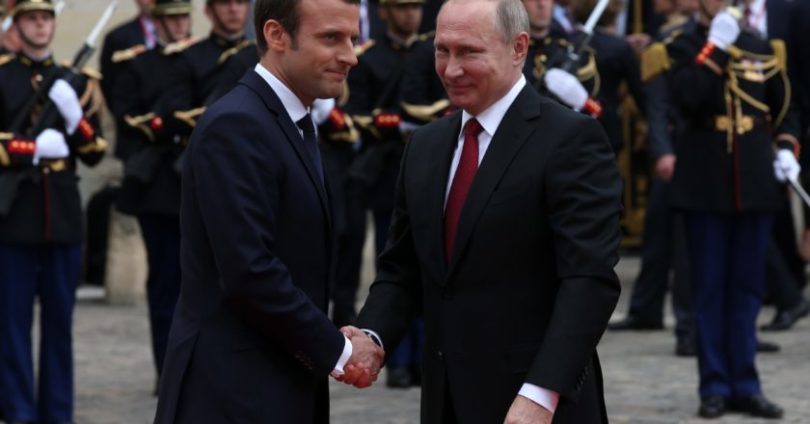 French President Emmanuel Macron signals abandonment of regime change policy saying removal of President Assad from power is no longer France’s “priority” which will focus on working with Russia to defeat Jihadi terrorism instead.

Newly elected French President Emmanuel Macron is the first Western leader to reflect the changed political realities in Syria caused by the recent advances of the Syrian army.

Specifically Macron has confirmed that removing President Assad from power can no longer be a priority, since there is no ‘legitimate successor’ to him.  The priority must instead be fighting the ‘enemy’ – Jihadi terrorism – which requires the help of Russia.

Not coincidentally, French Foreign Minister Jean-Yves Le Drian has travelled to Moscow, apparently with instructions from Macron to search for ways to reopen a dialogue with the Russians about Syria.  On that subject Macron had this to say both about a political settlement in Syria, and about his understanding of Russian President Putin’s perspective of the Syrian conflict and the fight against Jihadi terrorism there

This is a significant change in France’s position.  Under both Presidents Sarkozy and Hollande France has been the most hardline of all Syria’s Western enemies, to the point where at the time of the August 2013 Ghouta chemical attack crisis President Hollande continued to press for air strikes on Syria even after US President Obama began to signal that he was giving up on the idea.

This is not a total reversal of France’s position.  Macron is not saying that he accepts President Assad as Syria’s legitimate leader of Syria.  Nor is he saying that he wants President to stay in office, and that his future should be decided exclusively by the Syrian people.  Moreover Macron continues to make ridiculous statements about France ‘not tolerating’ Syrian use of chemical weapons despite the deserved ridicule this threat has previously elicited from Russian President Putin.

Nonetheless in publicly acknowledging that President Assad’s removal cannot be a precondition for a peace settlement Macron is the first Western leader to recognise reality and to break with the regime change orthodoxy the West’s leaders have up to now inflexibly followed.

I would add that though US Secretary of State Tillerson has on occasion also appeared to say that the US is no longer seeking regime change in Syria, Donald Trump as President (as opposed to Presidential candidate) has so far never quite done so.

Macron’s acknowledgement that regime change in Syria is off the agenda is of course no more than an acknowledgement of the obvious.  With ‘useful Syria’ – the populous and wealthy region along Syria’s coast where the bulk of Syria’s population lives – largely under President Assad’s control, with President Assad’s army advancing rapidly into eastern Syria, and with Russia having established a powerful air defence system in Syria, there is no realistic possibility of President Assad being overthrown by force.

Nonetheless the fact that Macron is the first Western leader to break with Western regime change orthodoxy with respect to Syria does him credit, and is consistent with the well established French concept of raison d’État.  It is the first genuinely hopeful step he has taken since he became French President.