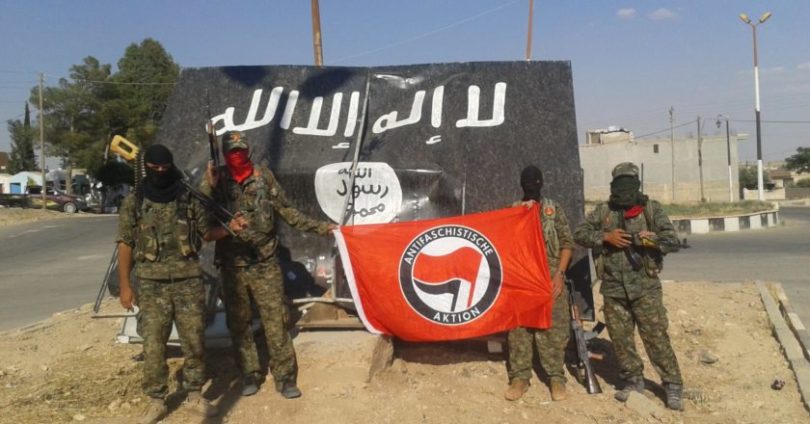 The so-called International Freedom Battalion is made up of people espousing hard-left ideology, but in reality they are fighting for the United States, Israel and now also Saudi Arabia.

What would one call a group of left and far-left armed militants who are actively fighting with a singular radical ethnic faction in order to destabilise and ultimately partition a legally recognised state whose government is ironically socialist and anti-imperialist in nature? Furthermore, what would you call it when these leftists are fighting under proxies of the United States who are supported by the genocidal state of Israel and now also the backward, terrorist sponsoring Wahhabi Kingdom of Saudi Arabia?

This is exactly what has been happening in Syria ever since the so-called International Freedom Battalion was formed in 2015.

Beginning in 2015, armed fighters from left wing organisations in Turkey, France, the United States, Britain, Spain and elsewhere began flooding into Syria where they have fought with the Kurdish YPG and other Kurdish fighting forces in the region.

Their left-wing propaganda videos are all over Youtube, some portray a kinder gentler side of a blood-soaked conflict while in others, masked men are shown brandishing weapons in the style of ISIS, only with far-left slogans rather than Salafist ones.

Among the fighters include groups representing various far-left ideologies which in the 20th century claimed the lives of millions. Among the groups represented are Maoists, anarchists, unreconstructed Leninists, Trotskyists and admirers of the brutal, fanatical Albanian dictator Enver Hoxha. These are people so far left that they make the responsible Communism of Gennady Zyuganov, look like a church choir.

They claimed that they came to fight ISIS and life the far-left revolutionary dream in the process.

Tell that to the countries who have leftists Kurdish insurgencies who threaten the territorial integrity of their legally recognised nationhood. These countries include places as diverse as Turkey, Iran, Iraq and Syria.

Because fighting ISIS was their creed, few people in the wider world bothered to scrutinise the International Freedom Battalion too much. But their activities bear scrutiny indeed.

What many in Syria had known for years is now abundantly clear to the wider world. The Kurdish militias which comprised the SDF are now enemies of the Syrian state.

They have made it clear that they seek to occupy and almost certainly annex the territories of Syria that they have conquered from occupiers on a different end of the political spectrum, ISIS.

International law dictates that this is unlawful, not least because the Kurdish led SDF is now nothing other than a proxy of good-old fashioned US imperialism, the same kind of imperialism that the left claims to fight but which in reality they are now fighting for and with.

It is the Syrian government who stands against foreign meddling in the affairs of sovereign states, it is Syrian government that stands up for a secular constitution where all religious factions and ethnic groups are treated equally, including all men and all women.

It is this Syria, the one which has for years resisted US hegemony, resisted Israeli aggression, resisted the neo-liberal economic order, resisted Salafist terrorism and resisted sectarianism that the leftist International Freedom Battalion is now de-facto fighting.

Countless Syrians warned that this could happen but few paid attention. While western governments condemned the Syrian government without any basis in fact, they lavished praise on the far left groups who have now been exposed as useful idiots in the service of American imperialism, the Greater Israel Project and the Wahhabist project for Saudi regional influence and domination.

The far-left has never been known to exercise a great deal of shame and I somehow doubt this will be the case this time .

Where the governing Arab Socialist Ba’ath Party of Syria (the clue is in the name) is a moderate centre-left, anti-sectarian party, the groups who compromise the International Freedom Battalion are cut from the same chord as the monsters who murdered Tsar Nikolai II’s children before murdering the Tsar himself.

The union between neo-liberal, neo-imperialist and neo-corporatist states and elements of the far left is complete.

Those who have called for “revolution” ought to take their pick. They can choose between the American corporate revolution, the Israel occupying and genocidal revolution or the Wahhabi human enslaving, head-chopping revolution.

The only question now is, will these ‘revolutionary fighters’ be arrested when they return to Turkey, Europe and North America as ISIS fighters would be in many cases?