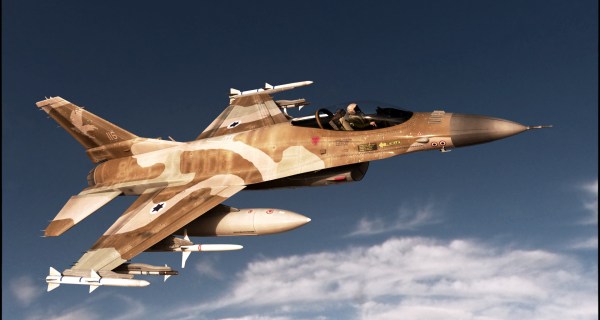 Israeli air force carries out air strike on Syrian army positions in the Golan Heights seeking to prevent Israel’s Al-Qaeda allies from being overrun by a Syrian counter attack.

The result was that the Syrian army itself decided to launch a counter offensive last night, apparently with the intention of retaking ground that the Al-Qaeda led Jihadis had captured in the Golan Heights earlier in the war.

The Syrian army counter offensive was however stopped in its tracks by an Israeli air force air strike.  Though the Israelis continue to claim that this was in response to a single mortar shell falling on their territory, this excuse has now worn so thin that I doubt any serious reporter of the Syrian war takes it seriously.

In other words the Israeli air force is now providing air to ground support for Al-Qaeda, an organisation labelled by the US and the UN a terrorist group, which the US accuses of carrying out the 9/11 terrorist attacks, which has itself taken credit for those attacks, and which has been the subject of what the George W. Bush administration called the “War on Terror”.

This is being done by a country – Israel – which is the ally of the US, and which vociferously proclaims itself to be not only the main victim of terrorism, but also terrorism’s most implacable enemy.

Anyone familiar with the twists and turns of Israeli policy will find nothing at all surprising about this.

As for the reasons for this current policy, which means the Israeli air force is now providing close air support for a terrorist organisation, I discussed it all here.

My one further observation about all this is the extraordinary pass Israel is given round the world for this frankly appalling behaviour.

It is not just that the Western media can be relied up never to criticise any action Israel takes however wrong or outrageous it might be.  The dismal truth is that none of the world’s major governments do so either.  Not only does the US invariably support Israel whatever it does and however outrageous its actions might be, but the days when Israeli actions would come in for strong criticism from the governments of Russia and China are long gone.

The Russians and the Chinese have their hardheaded practical reasons for this change of stance.  Since the Arabs are incapable of taking a united stand against Israel, there is little sense in them doing so.  Besides the Russians were badly burnt during the period from roughly 1967 to 1985, when they took a strong stand against Israel only to be blamed by the Arabs for their own failures, and when they found that Arab Jihadis were far keener to fight them in Afghanistan than to fight the Israelis.  Needless to say after that experience the Russians have no intention of sticking their necks out for the Arabs again.

Whatever the reasons for it this immunity from criticism will I believe in the end prove disastrous for Israel.

The peace treaties Israel has struck with Egypt and Jordan, the collapse of the USSR in 1991, the destruction of Iraq following the US invasion of that country, and the great rivalry between Saudi Arabia and Iran, have created an extraordinary political space for Israel, rather similar in regional terms to the so-called ‘unipolar moment’ the US briefly enjoyed following the USSR’s collapse in 1991.

Just as the US squandered its moment by embarking on a quixotic quest for global dominance instead of working for a stable international settlement advantageous to itself, so Israel is squandering its moment by using it to try to achieve the maximalist goals of its founders rather than agreeing a just and lasting peace with the Palestinians and with its neighbours.  Though Israeli leaders regularly speak of their desire for peace, whenever they set out the terms of the sort of peace they want, it turns out that it is not really peace at all that they want but victory.

That is a guarantee of perpetual war, leading to the sort of unholy alliances Israel has now forged with Al-Qaeda, a group which unlike Iran or most of the Palestinian groups that Israel routinely demonises really is a group which is ideologically driven to seek Israel’s destruction.

Over time that cannot make Israel’s position better or more secure.  On the contrary it can only make it less secure and worse.  However the absence of any criticism of Israel’s actions or of any external pressure on Israel to make it change its behaviour leaders means that there is no incentive for Israel’s leaders to change their behaviour, disastrous for Israel though I am sure it will eventually turn out to be.