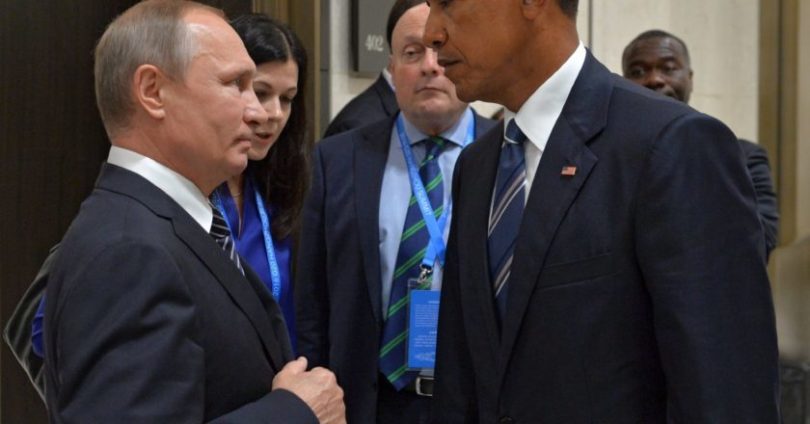 Washington Post confirms Trump Dossier caused Russiagate, triggering demands within an Obama administration humiliated at being bested by Russia in Syria for a massive showdown with Russia.

On 11th January 2017, shortly after publication of the now notorious Trump Dossier, I speculated that this obviously fictitious document might have been the cause of the whole Russiagate scandal.

According to the Washington Post article in August 2016 the CIA received secret but supposedly conclusive intelligence that Russian President Putin was seeking to swing the US Presidential election to Donald Trump.  CIA Director Brennan was supposedly so concerned that he immediately sent a secret memorandum advising President Obama of this.

Inside was an intelligence bombshell, a report drawn from sourcing deep inside the Russian government that detailed Russian President Vladi­mir Putin’s direct involvement in a cyber campaign to disrupt and discredit the U.S. presidential race.

That this refers to the Trump Dossier is clear from the highlighted words.

The Trump Dossier purports to be a “report drawn from sourcing deep inside the Russian government that detailed Russian President Vladimir Putin’s direct involvement in a cyber campaign to disrupt and discredit the US Presidential race”, which is exactly what the report mentioned in the article is said to be.

The timing is right, with the early parts of the Trump Dossier dated to June 2016 and Brennan sending out his memorandum to Obama in August 2016.

The Trump Dossier is not a US confection but was compiled by Christopher Steele, who is British, and who is a former agent of the British intelligence agency MI6.  The fact that the Washington Post story says that “the most critical technical intelligence on Russia came from another country” therefore again clearly points to the Trump Dossier, which originated not in the US but in Britain.

In light of these comments I do not think there is any doubt that it is the early sections of the Trump Dossier that are being referred to, and which were what caused Brennan to send his memorandum to the White House in August.

As the above comments show, outside the CIA the US intelligence community was initially deeply skeptical.  “The NSA was reluctant to view it [the material] with high confidence”. Director of National Intelligence James Clapper made his skepticism clear.  In the words of the Washington Post article

The Duran picked up Clapper’s skepticism at the time.  Here is what I wrote about it on 29th July 2017

Clapper did not say Russia was behind the leak.  Though he did not clear Russia, he says US intelligence has not yet established the identity of the hacker.   He says that there was nothing especially difficult or complex about the hack, meaning that any of many parties could have done it.  He has pointed out that both the US and Russia routinely hack each other, and that they have been engaged in this sort of thing ever since the start of the Cold War, and that only “the tools have changed”.  He says he is “taken aback” by all the “hyperventilation” that has surrounded the story.

By late September, under pressure from Brennan and the CIA, and also from the hardliners within the Obama administration – first and foremost Secretary of State Kerry and National Security Adviser Susan Rice – Clapper and the US intelligence community however fell into line.

Some residual doubts seem to have remained as shown by Comey’s refusal to sign the October 2016 joint intelligence statement as well as by the fact that the January 2017 ODNI report was drawn up by only three of the 17 US intelligence agencies and by the fact that the NSA refused to give “high confidence” to all the claims made in the January 2017 ODNI report.

However since circulation of the January 2017 ODNI report – fact free though it is – ‘group-think’ has taken over, and it is now career destroying heresy for any US politician or US official to express in public doubts that the Russians interfered in the Presidential election.

All this is disturbing enough.  The fact that the US intelligence community and the US political class have given credence to the Trump Dossier – obviously concocted and absurd though it is – shows both their profound paranoia about Russia and their staggering ignorance about it.

However the sequel is much more alarming.

The Washington Post article makes it clear that over the course of the autumn hardliners within the Obama administration sought to use the Russiagate scandal to escalate tensions with Russia to levels not seen since the Cuban Missile Crisis.  This is the range of action against Russia that they pressed for

What the Washington Post article does not say – though it will have been on the minds of all the US officials who discussed these options – is that October, when these proposals were discussed, was already a period of extreme tension between the US and Russia.

In September an agreement between US Secretary of State Kerry and Russian Foreign Minister Lavrov for a ceasefire in Syria was thwarted by a US bombing raid of Syrian military positions defending the eastern desert city of Deir Ezzor.  Following the collapse of the Kerry-Lavrov agreement the Syrian military backed by the Russians moved to wipe-out the Jihadi controlled enclave in eastern Aleppo.  Amidst a furious propaganda campaign in the West about Russian ‘war crimes’, reports began to circulate of planned US military action to break the siege of eastern Aleppo.  The Russians retaliated by deploying sophisticated S-300VM Antey 2500 anti aircraft missiles to Syria, and on 6th October 2016 warned that they stood ready to shoot down US aircraft that threatened their forces in Syria.  On 7th October 2016, in response to this Russian warning, the US backed down, with the White House confirming that all plans for military action in Syria had been called off.

In such circumstances to have sent a US naval carrier group to the Baltic Sea or to have launched cyber attacks against Russian infrastructure would have been beyond reckless.

More pertinently, what the Washington Post article also fails to say is that during this same period – late September to October 2016 – the Obama administration was being widely reported in the media to be planning action against Russia.  However the reason for the planned was not Russian meddling in the US election; it was Russian action in Syria.  Here is how I described it all at the time (2nd October 2016)

There is again talk of supplying Jihadi troops, presumably in the area around Aleppo, with shoulder held surface to air missiles (‘MANPADS’) (the Saker has explained why this would not be effective) and of the US pulling out of negotiations with the Russians (it is not obvious why the US thinks that would scare or impress the Russians) but the truth is that with a head on clash with the Russian military in Syria categorically ruled out by the US military, the US has no real cards left to play.

This is the reason for all the overblown rhetoric of Russian “barbarism”, of Russia becoming a “pariah nation”, of the death threats against Russian servicemen and civilians in Syria and elsewhere, of the talk of the US bombing of Syrian military bases in eastern Syria (this clearly refers to Deir Ezzor), and of the hints of imposing further sanctions (“coercive measures”) on Russia (a non-starter), and of expelling Russia from the UN Security Council or diluting its power of veto there (ditto).

At the time however the meeting between Obama and Putin in Hangzhou was being reported rather differently.  At that time the focus was on a plan Obama brought with him to Hangzhou for a ceasefire in Syria and specifically in Aleppo, which Putin however rejected.

It was only later that the focus of reporting of this meeting switched to the US election, with the fact that Syria was actually the main subject of discussion at this meeting no longer being mentioned.

Obama undoubtedly did raise the question of Russian interference in the US election with Putin during the meeting, and he certainly did threaten Putin both during and after the meeting with cyber warfare because he said as much at the time in public.  However  it is clear that this was a secondary issue.  The main topic of discussion at the meeting was Syria, with the ultimately abortive Kerry-Lavrov agreement following a few days after.

The hardliners failed to get the tough action they wanted against Russia.  The Washington Post speaks at length of their failure and disappointment.  Ultimately however all the proposals that were made turned out be counter-productive, risking more damage to the US than to Russia

The one serious move which Obama did authorise was the planting of ‘cyber bombs’ in Russia’s infrastructure, a plan which apparently is still going ahead

Putting aside the lack of morality and utter illegality of this measure, the Russians of course know all about it if only because former Vice-President Biden, former US President Obama, and now the Washington Post, have been able to resist the temptation to brag about it.  Putin even talked about it with Oliver Stone in the fourth episode of the Putin Interviews.

The Russians will certainly take both countermeasures and preventative measures in response, though Putin – showing far more discretion than Biden, Obama and the Washington Post – refused to hint what they might be.  He did however point out to Stone that the structure of the US economy makes it far more vulnerable to cyber attack than the Russian.

The story of Russiagate since the autumn is of the US political class and the US intelligence community, having accepted the fictions of the Trump Dossier as true, desperately working overtime to prove them true.  That is impossible for the simple reason that they are not true.  Future historians will be incredulous at the credence given to this absurd document.

However the chronology of events provides a partial answer to this riddle.  Over and above the fury of Hillary Clinton and the Democrats at losing an election they were sure they would win, there is the further factor of the huge anger within the US political leadership and intelligence community and within the Obama administration at the humiliation (as they saw it) that the US suffered in Syria because of Russia.

That made them determined to strike back at Russia in whatever way they could, which led them to seize on the fantastic allegations of Russian meddling in the Presidential election in the Trump Dossier in order to justify it.

In the event, as the Washington Post article admits, they have inflicted minimal hurt on Russia itself.  Instead they have provoked a massive political crisis in the US.

Whilst that has stopped the rapprochement with Russia that President Trump wanted, with the US government essentially paralysed and with the US President at war with his intelligence services, it is difficult to avoid the impression that the greater hurt in the end has been done to the US.