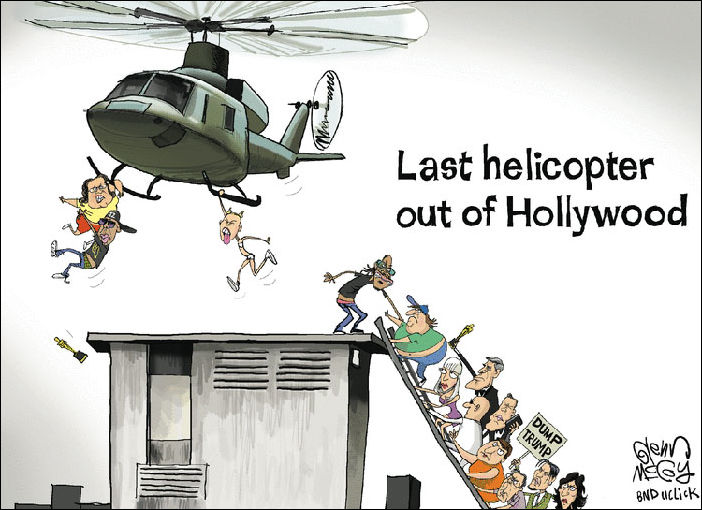 President Trump’s decision to withdraw from the Paris climate accord has sparked widespread hysteria in juice bars and luxury spas across Hollywood.

As a candidate, Trump vowed to “cancel” the Paris climate deal — slamming what he called “draconian climate rules.”

“The Paris accord is very unfair at the highest level to the United States,” the president told a gathering Thursday in the Rose Garden.

House Speaker Paul Ryan praised the president’s decision and thanked him for “withdrawing from this bad deal.”

“The Paris climate agreement was simply a raw deal for America,” Ryan said. “Signed by President Obama without Senate ratification, it would have driven up the cost of energy, hitting middle-class and low-income Americans the hardest.”

But some of Hollywood’s most esteemed scientists fear the president’s decision will put the nation on a slippery slope to the hothouse — an apocalyptic future with melting igloos and polar bears unable to put their Coca-Colas on ice.

“If this is true he will have the death of whole nations on his hands,” warned scientist-actor Mark Ruffalo. “People will be looking to the USA for retribution for what they loose [sic].”

I wonder which nation will be the first to spontaneously combust — Iceland? Liechtenstein?

“Beauty and the Beast” star Josh Gadtook a break from playing make-believe to ponder our fate.

“Our children & our grandchildren have all just been handed a dark future because of a man who tweets at 3:00 AM & doesn’t ‘trust’ science,” Gad tweeted.

Cher, who apparently has some sort of graduate level degree in climatology, posted a bizarre rant, suggesting the nation has been “held hostage by Insane DICTATOR.”

Don Cheadle, known for his esteemed role as a Juicy Burger’s employee in the 1985 film “Moving Violations,” decided to bring Trump’s little boy into the debate.

“If you care about your kids maybe reconsider your #ParisAgreement decision. Barron will thank you when he sees you, whenever that is,” Cheadle tweeted.

Leonardo DeCaprio, who became a famous Hollywood star because of an iceberg, was devastated by the news.

Do you feel his pain, America? I suspect he will evacuate to some far-flung, exotic island in a private jet to mend his wounded psyche.

I’m old school. Back when I was growing up we did not have climate change or global warming. We had something called weather. Hot in the summer, cold in the winter. It’s an inconvenient truth, but it needed to be said.

And many of us appreciate President Trump putting America first — instead of a bunch of godless European vegetarians who don’t put ice in their soft drinks.

“I was elected to represent the citizens of Pittsburgh, not Paris,” the president said in the Rose Garden.

So, let’s celebrate, America! I’m marking the occasion by firing up the grill, smoking a pork butt, cranking up the air conditioning, and driving around the neighborhood in a gas-guzzling SUV. And later tonight, I’ll remove an ice tray from my freezer to watch the ice cubes melt.