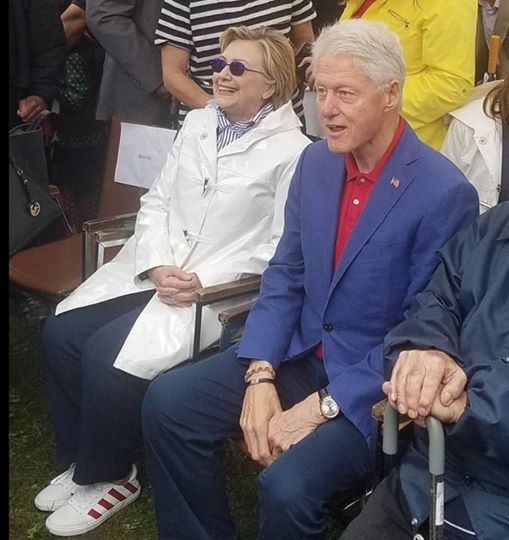 “I Was The Victim”: Hillary Clinton.

Hillary Clinton explaining away her pathetic election campaign at a tech conference.

Hillary Clinton, the most inept politician when it comes to tech, speaking at a tech conference.

And of course HRC told the tech audience that her election loss had nothing to do with her stupidity, laziness and complete ignorance of all things tech, but everything to do with Russia, Comey, sexism, and now Macedonia.

We being with Zerohedge’s coverage of Hillary’s delusion…

The following tweet pretty much sums up Hillary’s bizarre interview.

So Trump, who the left thinks is a moron, according to Hillary organized Macedonian websites, Russian agents, algorithms, & cyber hackings

Here are some more details of Hillary’s breakdown (courtesy Zerohedge)…

1. Hillary first blames Russia and Macedonia for her election loss.

Here is what HRC said regarding Russia’s master plan…

Guided by Americans…meaning guided by Trump is the conclusion in HRC’s twisted head.

And after this elaborate Kremlin plot was explained by Hillary, the failed candidate noted that the content of her emails “was the biggest nothing burger ever.”

Just so everyone understands...the Russians formulated the perfect plan to destroy Hillary and American Democracy on top of “nothing burger” email content.

Zerohedge adds that even though most of the stories that we and other media outlets covered came directly from the DNC’s and John Podesta’s own emails, Hillary would like for you to know that it was all “fake news”… just like it was “fake news” when Donna Brazile told everyone that she didn’t share debate questions with Hillary.

3. Hillary then proceeded to blame the media, that overwhelmingly supported her throughout the entire campaign.

4. Sexism…Hillary finally blamed good old fashion misogyny for her election loss, forgetting that it was the boys of Goldman who paid her millions of dollars to speak.