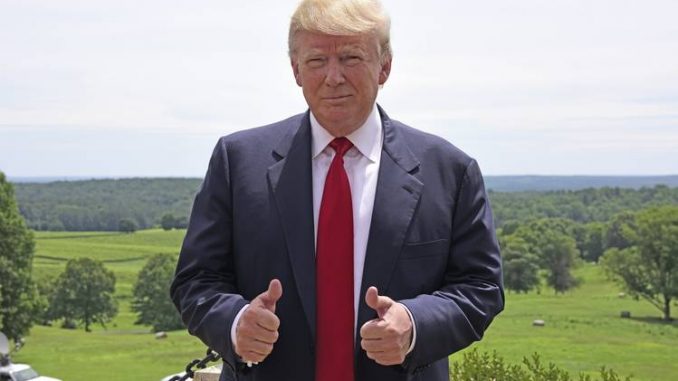 By exposing the global warming hoax as the scam that it is, President Trump has saved the American taxpayer tens of billions of dollars that would have been used to line the elites’ pockets.

Climate alarmists and mainstream media are trying to convince everyone that President Trump condemned the planet to ruin by refusing to sign the expensive and pointless Paris Climate Accord, but one very influential man — John Coleman, founder of the Weather Channel — has hit back at the phonies and called them out on their self-serving lies.

In a series of tweets and emails Coleman sent to Al Gore and various Democratic supporters and organizations, he called out climate alarmists with a barrage of facts based on actual science and not politically correct liberal groupthink.

As it turns out, if you chart global temperatures back into the ’70s, there is absolutely no sign of global warming.

There’s been less than one degree temperature change since 1978 and no warming to speak of since 1998. So where was the Democrats and their propaganda mouthpieces in the mainstream media getting their information from?

Yovav Gad reports: It turns out that the government has been manipulating climate computer models. This means that the American taxpayers are being charged $4.7 billion a year in taxes that are being used to fund organizations that carry out meaningless studies based on bad science.

Basically, the American people are paying fake scientists to lie to them.

Spread this everywhere. Donald Trump deserves our support. He wants to help this nation. We can’t live in lies anymore. Trump’s move will save $100 billion and jobs! We can not afford luxuries now. Share this post if you support our President’s policy!

Gore said that on Sept. 21, 2007, “scientists reported with unprecedented alarm that the North Polar icecap is, in their words, ‘falling off a cliff.’ One study estimated that it could be completely gone during summer in less than 22 years. Another new study to be presented by U.S. Navy researchers later this week warns that it could happen in as little as seven years, seven years from now.”

“U.S. Programs Global Warming Grants U.S. Programs became engaged on the global warming issue about four years ago, at George Soros’s suggestion,” reads a leaked OSI memo. “There has been a budget of $11 million for global warming grants in the U.S. Programs budget for the last several years,” the memo reads. “This budget item captures George Soros’s commitment of $10 million per year for three years to Al Gore’s Alliance for Climate Protection, which conducts public education on the climate issue in pursuit of creating political space for aggressive U.S. action in line with what scientists say is necessary to put our nation on a path to reducing its outsize carbon dioxide emissions.”

It’s unclear what year the memo was sent, but the Gore co-founded Alliance for Climate Protection (ACP) was established in 2006 and lasted until it became The Climate Reality Project in July 2011. In 2008, the Alliance launched a $300 million campaign to encourage “Americans to push for aggressive reductions in greenhouse gas emissions,” The Washington Post reported.

[Tens Of Thousands Of Scientists Declare Global Warming A Hoax]

ACP got $10 million from the Open Society Institute (OSI) in 2008, according to the nonprofit’s tax filings. OSI handed over another $5 million to ACP in 2009, according to tax filings. The investigative reporting group ProPublica keeps a database that has OSI tax returns from 2000 to 2013. The DCNF could not find other years where OSI gave money to ACP.

Other reasons for changes in temperatures could also be related to things such as the Sun Solar variation and Aerosols forcing — scientists opposing the mainstream scientific assessment of global warming express varied opinions concerning the cause of global warming. Some say only that it has not yet been ascertained whether humans are the primary cause of global warming; others attribute global warming to natural variation; ocean currents; increased solar activity or cosmic rays. The consensus position is that solar radiation may have increased by 0.12 W/m2 since 1750, compared to 1.6 W/m2 for the net anthropogenic forcing.

“The combined change in radiative forcing of the two major natural factors (solar variation and volcanic aerosols) is estimated to be negative for the past two, and possibly the past four, decades.“
A few studies say that the present level of solar activity is historically high as determined by sunspot activity and other factors. Solar activity could affect climate either by variation in the Sun’s output or, more speculatively, by an indirect effect on the amount of cloud formation. Solanki and co-workers suggest that solar activity for the last 60 to 70 years may be at its highest level in 8,000 years.