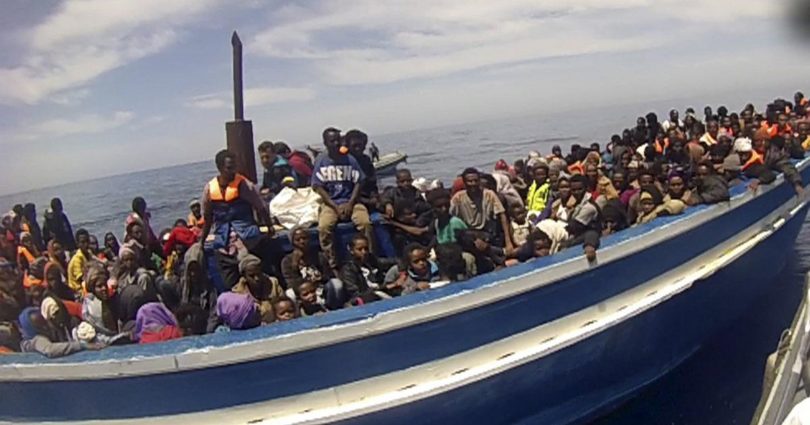 First, it was the Hungarian route. Then it was the Balkan route. Now Italy is the epicenter of this demographic earthquake, and it has become Europe’s soft underbelly as hundreds of thousands of migrants arrive.

With nearly 10,000 arrivals in one recent three-day period, the number of migrants in 2017 exceeded 60,000 — 48% more than the same period last year, when they were 40,000. Over Easter weekend a record 8,000 migrants were rescued in the Mediterranean and brought to Italy. And that is just the tip of the iceberg: during the summer, the number of arrivals from Libya will only increase.

A replacement of population is under way in Italy. But if you open the mainstream newspapers, you barely find these figures. No television station has dedicated any time to what is happening. No criticism is allowed. The invasion is considered a done deal.

There are days when the Italian navy and coast guard rescue 1,700 migrants in 24 hours. The country is exhausted. There are Italian villages where one-tenth of the population is already made up of new migrants. We are talking about small towns of 220 residents and 40 migrants.

One of the major aspects of this demographic revolution is that it is taking place in a country which is dramatically aging. According with a new report from the Italian Office of Statistics, Italy’s population will fall to 53.7 million in half a century — a loss of seven million people. Italy, which has one of the world’s lowest fertility rates, will lose between 600,000 to 800,000 citizens every year. Immigrants will number more than 14 million, about one-fourth of the total population. But in the most pessimistic scenario, the Italian population could drop to 46 million, a loss of 14 million people.

In 2050, a third of Italy’s population will be made up of foreigners, according to a UN report, “Replacement Migration: Is It a Solution to Decline and Aging Populations“, which designs a cultural melting-pot that could explode in cultural and social tensions. The level of arrivals will fall from 300,000 to 270,000 individuals per year by 2065; during the same period, it is expected that 14.4 million people will arrive. Added to the more than five million immigrants currently in Italy, 37% of the population is expected to be foreigners: more than one out of every three inhabitants.

In addition, the humanitarian-aid system has been hit by new scandals. “The investigative hypothesis to be verified is that subjects linked to ISIS act as logistical support to migration flows”, was a warning just delivered in front of the Schengen Committee, to the Italian anti-mafia and counterterrorism prosecutor, Franco Roberti. There are now judges investigating the connection between the migrants’ smugglers in North Africa and the Italian NGOs rescuing them in the Mediterranean. People-smugglers bring the migrants to the NGOs’ ships, which then reach Italian seaports. Another legal enquiry has been opened about the mafia’s economic interests in managing the migrants after their arrival.

Only 2.65 percent of those migrants who arrived in Italy were granted asylum as genuine refugees, according to the United Nations. The other people are apparently not fleeing wars and genocide. Yet, despite all this evidence, one cannot compare the migrants to the Jews fleeing Nazism. Pope Francis, for example, recently compared the migrants’ centers to Nazi “concentration camps“. One wonders where are the gas chambers, medical “experiments,” crematoria, slave labor, forced marches and firing squads. Italian newspapers are now running articles about the “Mediterranean Holocaust“, comparing the migrants dead by trying to reach the southern of Italy to the Jews gassed in Auschwitz. Another journalist, Gad Lerner, to support the migrants, described their condition with the same word coined by the Nazis against the Jews: untermensch, inferior human beings. These comparisons are spread by the media for a precise reason: shutting down the debate.

To understand how shameful these comparisons are, we have to take a look at the cost of every migrant to Italy’s treasury. Immigrants, once registered, receive a monthly income of 900 euros per month (30 euros per day for personal expenses). Another 900 euros go to the Italians who house them. And 600 euros are needed to cover insurance costs. Overall, every immigrant costs to Italy 2,400 euros a month. A policeman earns half of that sum. And a naval volunteer who saves the migrants receives a stipend of 900 euros a month. Were the Nazis so kind with their Jewish untermenschen?

The Italian cultural establishment is now totally focused on supporting this mass migration. The Italian film nominated at the Academy Awards last year is Fire at Sea, in which the main character is a doctor treating the migrants upon their arrival. Italian Prime Minister Matteo Renzi carried with him 27 DVDs of the film to a session of the European Council. Italy’s commercial television channels produced many television programs about the migrants, such as “Lampedusa“, from the name of the Italian island. 100,000 Italians even took the streets of Milan for a “rally of solidarity” with the migrants. What “solidarity” can there be if half a million people have been rescued by the Italian government and the whole country seems determined to open its doors to all of North Africa?

Winston Churchill was convinced that the Mediterranean was the “soft underbelly” of Hitler’s Europe. It has now become the soft underbelly of Europe’s transformation into Eurabia.