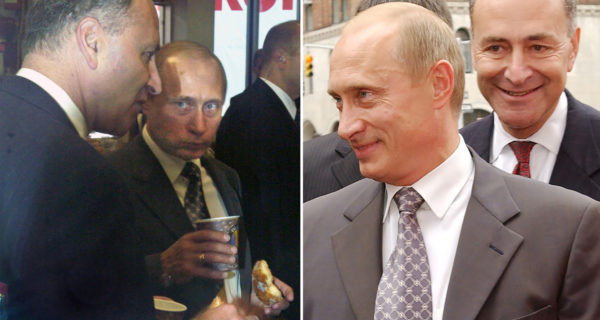 The story proves that Russia may be forever used by the Democrats as their weapon of choice in petty domestic political warfare.

The Washington Post has published extraordinary claims about Donald Trump, claims which if true could likely be impeachable offences.

There’s only one problem. They are almost certainly not true.

The clams are defined by WaPo as follows,

The fact is that this ‘breaking story’ is yet again from anonymous sources simply defined as ‘current and former officials’. Ostensibly, these former officials worked under Barack Obama and embody the corresponding agenda.

Speaking of Barack Obama, one is tempted to feign sympathy for the need to rely on anonymous sources in the aftermath of eight years of Obama’s war against whistle blowers. But this argument quickly unravels in this specific context.

Bradley Manning, Julian Assange and Edward Snowden were and frankly are all being hounded by US authorities for exposing corruption, criminality and ethical violations in the military, deep state and wider intelligence-industrial complex.

Whoever ‘leaked’ this ‘story’ to the Washington Post would have certainly angered Donald Trump, but because the accusation boils down to something that is partisan in nature, the Democrat machine which even when out of power is frankly stronger than anything the Republicans have to offer, would have not only protected said individuals, they would have lionised them. I can all ready hear the nasal Chuck Shumer speech in their defence. One can close one’s eyes and see Nancy Pelosi’s interpretive dance in support of said individuals, live from the streets of San Francisco.

As it is, both Secretary of State Rex Tillerson and National Security Adviser General H. R. McMaster have said that the story is categorically false.  McMaster, far from being pro-Russian, is something of a traditional neo-con.

Sometimes one is tempted to go to an old pay-phone, ring up the Washington Post and say ‘I’m a White House official and I have information that Donald Trump secretly uses priceless paintings of George Washington as target practice for his shotgun inside the White House”.

If the story came out in a few days that would prove just how easy it is to be an ‘anonymous source’ for the US mainstream media. I still cannot believe it is this easy, but I do in all sincerity believe it isn’t that much more difficult to get information published in the mainstream media under false pretences.

The likely truth of the matter is that this story is totally false and is part of a further narrative designed to discredit Donald Trump.

The people behind it are almost certainly members or supporters of a Democratic party that cannot accept that their candidate lost and furthermore they are on the verge of neurosis over the fact that Hillary Clinton lost to a man who stands for everything she hates: traditional values, anti-political correctness, anti-identity politics and in your face Americana (love it or  hate it).

This is all that it has ever been about. Many of these people probably couldn’t point out Lugansk on a map, though suddenly they are experts in every conflict incorrectly blamed on Russia. If one explained that Sevastopol is a Federal City of the Russian Federation whose government is separate from the rest of the Crimean peninsula, I’m sure the looks of total confusion would be priceless.

The people lacerating Trump using Russia as their subject of choice are only concerned with domestic, post-electoral issues, but are using foreign issues to try and make themselves look less petty than they actually are. The question is, why Russia?

Here’s an intellectual exercise to help one understand why Russia is the target.

Q: Are the Democrats targeting Russia because they still think it is Communist and these people are hard core Goldwater style Cold Warriors?

A: No. Stupid though many of these people seem, they do realise that Russia is no longer a Communist state. They’re old enough to remember, even the ones who once had a nasty drug habit.

Q: Are the Democrats inversely hard core closet Communists who view Russia as selling out the Marxist-Leninist dream?

A: No. These people are as deep in the pocket of Wall Street as any other capitalist and furthermore the Communist Party of The Russian Federation is the second most popular party in the democratically elected State Duma. Modern Russia did not arrest nor ban communism, it simply forced it to complete in elections and as it is, it typically does well.

Q: Have these people been paid millions by the Polish, Ukrainian, Latvian, Estonian or Lithuanian lobbies?

A: Partly yes, but these lobbies are far weaker than the Saudi, Israeli and Qatari lobbies, FAR weaker. Again, most of these people probably couldn’t precisely find Latvia on a map. I dare someone like Mark Dice to take his map off the San Diego beach and to downtown Washington D.C. to prove this.

Q: Do Democrats associate Russia with the conservative values of traditional culture, Christianity, ideologically free patriotism and a place where the only ‘identity politics’ involved is having an identity that loves Russia?

A: YES! Some could even articulate it…especially after a bit of that infamous Russian chemical agent known as vodka.

If the Republicans were intelligent enough to articulate this (and thus far they have not been), they might actually start winning elections among America’s conservative Christian heartland for reasons other than the fact than ‘they aren’t as creepy as the modern Democrats’.