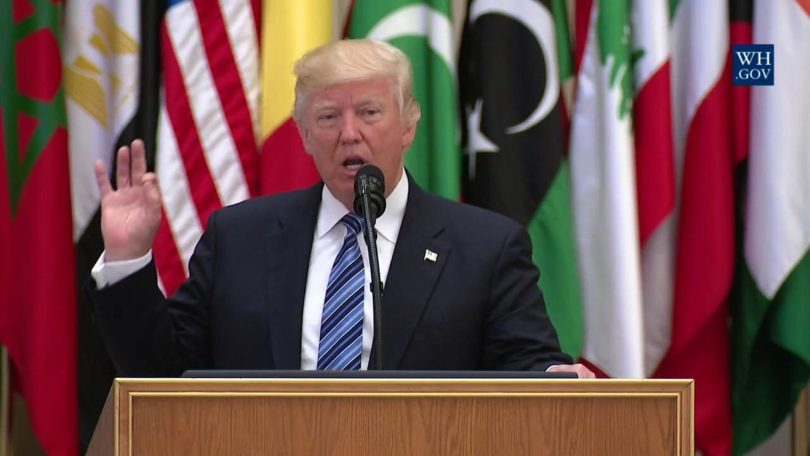 President Trump yesterday delivered a speech to a meeting of 20 leaders of Muslim nations — but not Iran — in Riyadh. His speech called for a universal war on terrorism as a basis for uniting the world for peace and development. The speech should end at least one aspect of the hysteria and lies being used in the “color revolution” to destroy his Presidency — that he is anti-Muslim. He noted that 95% of those killed by terrorism are Muslim, stating: “With God’s help, this summit will mark the beginning of the end for those who practice terror and spread its vile creed.”

There are clearly problems to be addressed regarding the Saudis, whose support for Wahhabism has been the primary ideological base for the terrorist scourge internationally, while much of the funding and arming of the terrorist operations came either directly from the Saudis, or was channeled through the Saudis by the British and the Bush and Obama administrations. The Saudis are now engaged in a hideous war on Yemen, with British and American weapons, creating one of the most severe humanitarian disasters in modern times.

However, the world has changed, dramatically, over the past year, and especially over the past week. The Belt and Road Forum for International Cooperation in Beijing last week marks a phase change in the history of mankind — a new world economic order has been officially established, based not on zero-sum, dog-eat-dog geopolitics, but on win-win physical economic development and cultural cooperation. Saudi Arabia, the U.A.E., and other Gulf and Arab nations sent high level representatives to the Forum. As Helga Zepp-LaRouche has consistently argued, and as has been increasingly promoted by the nations of the Middle East, the New Silk Road is the unique basis for rebuilding the region from the destruction wrought by both the terrorists and the deadly and criminal wars of destruction waged by Trump’s two predecessors in the White House.

In contrast to Bush and Obama’s regime-change wars, waged through the colonialist mentality of a “responsibility to protect” (“white man’s burden”), destroying governments and countries when they refused to submit to the West’s direction, Trump has taken a different track: “We are adopting a principled realism rooted in common values, shared interests, and common sense,” he said in Riyadh. “We are not here to lecture. We are not here to tell other people how to live, what to do, who to be, or how to worship. Instead, we are here to offer partnership based on shared interests and values to pursue a better future.”

There is a danger in Trump’s acceptance of the blanket denunciation of Iran. In his speech, he accuses Iran of offering “safe harbor, financial backing, and the social standing needed for recruitment” to terrorists. He seems to be ignoring ISIS, al-Qaeda, and the other deadly Wahhabist terrorist organizations funded by or through the Saudis, when he denounces Hezbollah and Hamas, and even praises the Saudi war on the Houthis in Yemen.

But the changed world condition gives hope that these issues can be resolved. At the root of the instability in the Arab world is the Israeli-Palestine conflict. Trump is the rare case of a U.S. President who has stood up against the British division of the world between the so-called “free world” in the West and the so-called “Godless communists” in the East, promoting instead that the most powerful nations on Earth — the U.S., Russia and China — have every reason to work together as friends. This is the global context in which all geoplitical divisions can be replaced with win-win solutions.

Trump said in his speech: “In that spirit…, I will travel to Jerusalem and Bethlehem, and then to the Vatican, visiting many of the holiest places in the three Abrahamic faiths. If these three faiths can join together in cooperation, then peace in this world is possible, including peace between Israelis and Palestinians.”

Ultimately, this vision of a peaceful and prosperous future depends on mankind as a whole coming together through an understanding of our diverse cultural characteristics, but our common humanity. As Helga Zepp-LaRouche said in her speech to the Forum in Beijing on May 14: “The New Silk Road must—as the ancient one did—lead to an exchange of the most beautiful expressions of culture of all participating countries in order to succeed. The true meaning of win-win cooperation is not just the material benefit of infrastructure and industrial development, but of making the joyful discovery in other cultures of the beauty of their classical music, poetry, and painting, and, by knowing them, strengthen our love for mankind as a whole.”

This must be our mission.