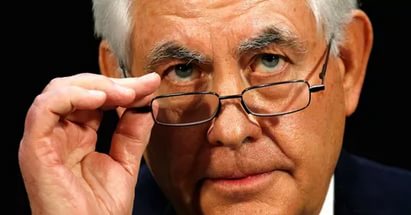 US Secretary of State Rex Tillerson, delivering his first address to the staff of the State Department, has set out a vision of US foreign policy which if different would be radically different from anything seen over the last few decades.

At this point an essential qualification is needed.  When US politicians and diplomats talk of a foreign policy based on ‘values’ they do not mean a foreign policy constructed exclusively around the ‘values’ Tillerson referred to: “freedom, human dignity, and the treatment of people the world over” .  People in Saudi Arabia or in the occupied Palestinian territories are not the object of US sympathy despite being denied all these things.

Rather when US politicians and diplomats talk of a foreign policy based on ‘values’ they mean one where the US seeks to use these ‘values’ as leverage to increase its geopolitical influence as part of an ideological mission to entrench its global position.

This is the foreign policy that Tillerson appears to be repudiating.  Interestingly, in the same speech he is reported to have spoken about the need to work for better relations with Russia, the country that the neocons have cast as the US’s primary ideological and geopolitical adversary

It need hardly be said that within Official Washington these ideas are heresy and it is far from certain whether most of the other officials in the Trump administration share them.

The President has however spoken similarly in the past and it seems that for the moment Tillerson has his support.

TIllerson is due to meet with Russian Foreign Minister Lavrov shortly, when he presumably continue to try to put his foreign policy line into action.  It will be interesting to see how far he can succeed.