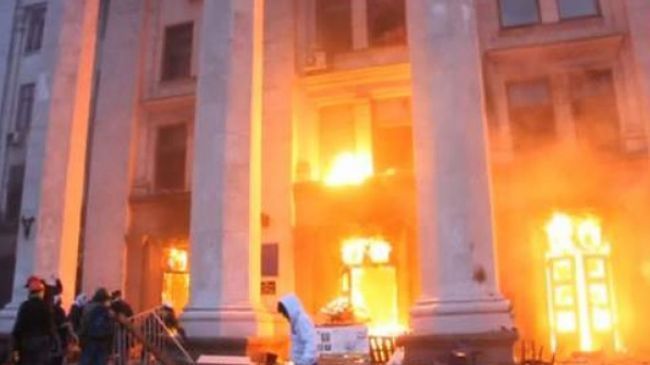 The Odessa Massacre remains a haunting moment for the mothers and fathers who had to bury their young children after they were burned alive or fell to their deaths.

The 2nd of May marks the three year anniversary of one of the most tragic events of the 21st century. 42 peaceful protesters were killed when gangs of fascist thugs, most from far outside the region, went on a rampage that can only be described as hellish.

For months, peaceful protesters had set up camp outside the Odessa Trade Unions House. They were there to show solidarity against the fascist, nationalistic and ultra-right wing forces gathered on the Maidan in Kiev.

Protests became more numerous after the coup against the legitimate Ukrainian President Viktor Yanukovych which occurred on 22 February 2014, a day after the coup leaders had reached an agreement with the President. However, it became clear within hours that they did not intended to uphold their end of the bargain and as a consequence, the President fled in the middle of the night.

Yanukovych had the legal authority as President to call in allied states to help him restore order. Syria in its battle against insurgent terrorists has done this and President Basar al-Assad remains in power to this day because he asked his allies for assistance.

Yanukovych could have easily moved his government to a less volatile part of the country in order to set up his command centre. He took the coward’s way out,  but the protesters did not.

The protests in the wider historic Novorossiya region were wide spread. Anti-fascist demonstrators organised not only in Odessa but in Kharkov, Donetsk, Lugansk, Mariupol,  Dnepropetrovsk as well as smaller towns in the region. Novorossiya was an area won by the Russian Tsars from the Ottoman Sultans during the Russo-Turkish wars of the 18th century. By the late 18th century, the area was firmly under Russian authority.

The Bolsheviks, in a move that has caused a great deal of  bloodshed in recent years. re-drew the internal  map of Russia and made Novorossiya part of the Ukrainian Soviet Socialist Republic. This is the only reason that much of this area is today, part of the Ukrainian state. There is no greater historical or present day justification for this other than a very unwise move by Lenin in the 1920s.

READ MORE: Nationalism without a nation and the origin of the Ukrainian conflict

Throughout the winter and into the spring of 2014, the protests in historic Novorossiya were generally peaceful but often turned violent as fascist thugs from western Ukrainian often visited the protests in order to beat and kill the protesters.

In May of 2014, in the days prior to the 9th of May Victory Day celebrations over Hitler’s fascist forces, things started to become tense.

Knowing that the ethnic and cultural Russians of the region would be honouring their fathers and grandfathers on the 9th of May, the fascist/ultra-nationalist presence in the region grew.

Many people were severely beaten simply because they were wearing the Ribbon of St. George, the symbol of Victory Day that had been adopted by anti-fascist protesters to show solidarity against extremism.

May the 2nd: The Massacre

The 2nd of May, 2014, began as a day like any other. Although many had seen that in previous days, fascist thugs from the neo-Nazi group Right Sector, the neo-fascist party Svoboda as well as far-right football hooligans from outside the region had descended on Odessa. They continued to pour in on the morning of the 2nd.

By the afternoon, the fascist gangs started violently attacking the anti-fascist protesters. As the anti-fascists come under increasingly violent attacks, the peaceful protesters ran into the Trade Unions House, eventually barricading themselves inside for protection.

As the afternoon wore on, fascists were seen firing shots into the building and then they began to set the building on fire using a combination of Molotov cocktail and flaming debris.

As the fire raged, the fascists surrounded the front and back of the building, prohibiting escape. Many of the protesters, some in their mid-teens died of asphyxiation. Others jumped to their deaths.

Some who jumped and survived the initial fall were beaten to death. Others were tortured to the brink of death.

The authorities did nothing.

The events were videoed and I can personally remember watching as the attack unfolded. It was a barbaric brutality that one had naively hoped had no place in the 21st century. This after all was the age of Facebook, not the age of Hitler. But for those who committed the massacre, it was clearly the age of both. 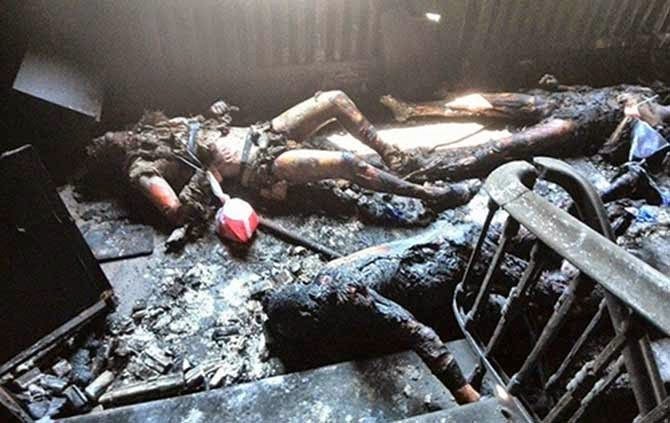 The west remained largely indifferent while the western mainstream media did their best to whitewash the massacre.

There was and still is a kind of unspoken racism that was inherent in the west’s coverage of The Odessa Massacre. Had the events happened in the Arab world and under an ISIS flag, things would have doubtlessly got more coverage.

But because the victims were ethnic and cultural Russians, things were interpreted through the prism of two paradoxical but equally potent forms of racism.

On the one hand, European and English-speaking audiences have been racially conditioned to believe that savage atrocities only happen in the Middle East, Africa or Asia. This is of course unfair and insulting to the vast majority of peace loving people in the aforementioned places.

At the same time, Russians, a distinct ethnic group in spite of their generally white skin, can still be described in racially inflammatory ways by the west. This does not generally happen to black Africans, white Jews, African-Americans or Latin Americans in the western mainstream media. The only other group subject to the same slander as Russians are Serbs, a people who are an historical ally to Russia.

READ MORE: Western racism and the stereotyping of Russians

Odessa had always been a multi-cultural city. In addition to Russians, it historically had vibrant populations of Greeks, Serbs, Romanians, Turks, Albanians,  French Poles, and members of many faiths including many demonstrations of Christianity, Jews and Muslims.

That such a fascist atrocity could happen in such a place, decades after Hitler’s forces were vanquished in the region, seemed inconceivable to many.

The protests in Lugansk and Donetsk continued unabated. These places held referenda on becoming independent republics. The votes passed in each. Forces loyal to Kiev continue to assault Donbass, but the militias of Donbass formed in 2014 have thus far managed to keep the young republics free.

The rest of historic Novorossiya continues to be neglected by the impoverished, corrupt and extremist regime in Kiev. Many in these regions wait for the day that they too can form an independent federation or re-unite with Russia, their only logical home country.

The 2nd of May remains a deeply tragic event. It is a wound that cannot even begin to be healed until the Kiev regime acknowledges responsibility for unleashing fascism on the country. However, with Kiev’s forces continuing to attack the anti-fascist forces of Donbass on a daily basis, it is unlikely that this will happen any time soon.