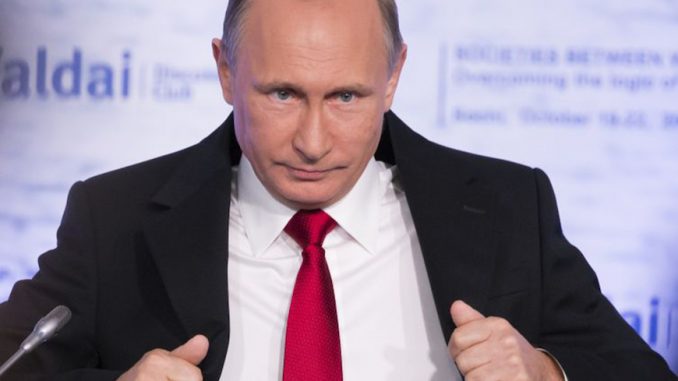 Russian President Vladimir Putin has called on the people of Europe to rise up and fight the globalist agenda, before its too late.

Speaking at the at the infamous Valdai conference in 2016, Putin called for the self preservation of Europe from an evil globalist agenda.

“A further challenge for the national Russian identity is connected to the processes we observe outside of Russia. They include foreign policy, moral, and other aspects. We see that many Euro-Atlantic states have taken the way where they deny or reject their own roots, including their Christian roots which form the basis of Western civilization.

“In these countries, the moral basis and any traditional identity are being denied – national, religious, cultural, and even gender identities are being denied or relativised. There, politics treats a family with many children as juridically equal to a homosexual partnership; faith in God is equal to faith in Satan. The excesses and exaggerations of political correctness in these countries indeed leads to serious consideration for the legitimization of parties that promote the propaganda of paedophilia.

“And these countries try to force this model onto other nations, globally. I am deeply convinced that this is a direct way to the degradation and primitivization of culture. This leds to deeper demographic and moral crisis in the West.

“What can be better evidence for the moral crisis of human society in the West than the loss of its reproductive function? And today nearly all “developed” Western countries cannot survive reproductively, not even with the help of migrants.

“Without the moral values that are rooted in Christianity and other world religions, without rules and moral values which have formed, and been developed, over millennia, people will inevitably lose their human dignity and become brutes. And we think it is right and natural to defend and preserve these Christian moral values.

“One has to respect the right of every minority to self-determination, but at the same time there cannot and must not be any doubt about the rights of the majority.

“At the same time as this process plays out at a national level in the West, we observe on an international level the attempts to create a unipolar, unified model of the world, to relativise and remove institutions of international rights and national sovereignty. In such a unipolar, unified world there is no place for sovereign states. Such a world needs merely vassals.

“From a historical perspective, such a unipolar world would mean the surrender of one’s own identity and of God-created diversity.”