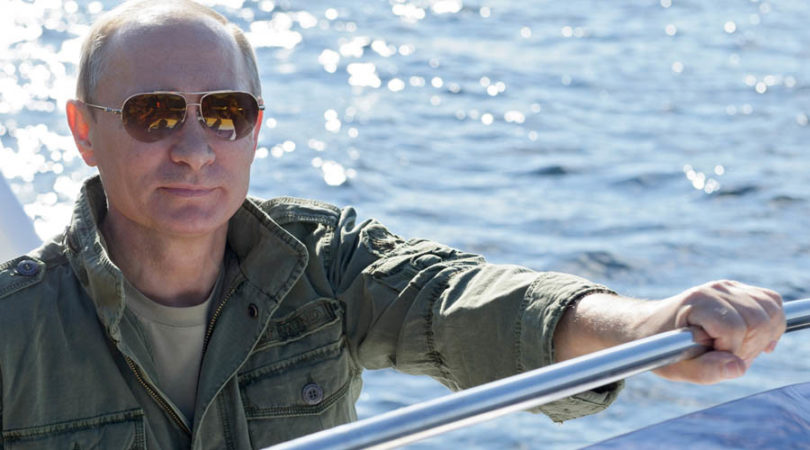 In an extraordinary moment this week, Russian leader Vladimir Putin offered Washington a challenge to discover the truth over sensational US media claims that President Trump had leaked top-secret information to Russia. Washington rebuffed Putin’s offer.

It was akin to the iconic scene in the sci-fi movie, The Matrix, in which protagonists are offered a red or blue pill. Consuming the former leads them to awaken to the truth, however painful that awakening might be from shattering erstwhile illusions. Ingesting the alternative blue pill allows one to continue in a state of illusion, albeit in the form of slavery to The Matrix.

The US media this week went into overdrive with claims that President Donald Trump disclosed highly classified information during his meeting last week in the White House with Russian Foreign Minister Sergey Lavrov. Those claims of Trump talking about highly sensitive intelligence on the Islamic State terror group in Syria were rejected by the White House and separately by the Kremlin.

The next day another US media bombshell report claimed Trump had pressed former FBI chief James Comey into dropping his investigation into alleged Russian links to Trump’s previous National Security Adviser Michael Flynn. Combined, the stories – all based on anonymous claims – tend to lend credence to the long-running narrative that Trump is in some way compromised by Russia. The Kremlin is alleged to have “leverage” over the US Commander-in-Chief.

Further to the Kremlin rejecting claims of Trump sharing classified information with Lavrov, Russian President Vladimir Putin, who described the media frenzy gripping the US over Trump and his alleged Russian collusion as “political schizophrenia,” went one step further and offered to provide transcripts of the meeting in the Oval Office, which took place on May 10.

Putin said the internecine politics was far from amusing and actually portended a dangerous development. If political opponents of Trump can make up such false claims to discredit the president, calling for his impeachment, then such delusional thinking represents a real risk to global security matters in the future, said Putin.

On the Oval Office meeting between Trump and Lavrov, the US media and its anonymous sources are saying one thing; while the White House, Trump’s national security adviser and the Kremlin are saying the opposite. So, who is telling the truth?

One way to get to the bottom of the fog is to read a transcript of the discussion, which is what Putin just offered. He added, with due courtesy, the proviso, “if the White House considered it appropriate,” to provide the transcript.

In other words, Putin was offering a red pill moment.

The US media and congressional opponents of Trump scoffed at the idea of Russia interjecting to resolve the growing scandal surrounding the president. Republican Senator Susan Collins, who sits on the intelligence committee investigating allegations of collusion with Russia, told news outlet CNN that Russia was an adversary of the US and to accept the Kremlin’s word was “absurd.”

But is such an idea really absurd? Consider what is at stake. The President of the United States is being harangued by his opponents on Capitol Hill and in the media who are, in effect, accusing him of traitorous conduct, consorting with an enemy state, and lying through his teeth to the American people. There is a sense that Trump’s opponents can smell blood and think it is within their grasp to impeach him from office. Senator John McCain claims the crisis is reaching “Watergate” proportions, which led to President Richard Nixon’s downfall in 1974.

But just as the “Russia-gate” scandal seems to be reaching a climax, there is also this underlying moment of weakness in the whole alleged affair. Did Trump disclose top-secret information to Russia’s Lavrov last week or not? Trump and his colleagues, H.R. McMaster, Secretary of State Rex Tillerson, and Deputy National Security Adviser Dina Powell, reject this, as does Russia.

If the transcript supplied by Russia – and it would be easy to verify it as bona fide – did indeed show Trump is telling the truth, then that would exonerate him. More importantly, the “moment of truth” would expose the US media reports of Trump being some Russian stooge as nothing but a giant fabrication.

It would also confirm what Putin has decried as the “political schizophrenia” gripping large sections of the US corporate-controlled news media and politicians in Washington.

The US political establishment – mainly the Democratic party and their media surrogates – have never accepted the will of the American people in electing Donald Trump last November. Instead, they have sought to discredit the sovereign right of the people and the electoral mandate they gave to Trump with the tall-story of Trump being a Russian stooge.

This delusional story is a cover for a de facto coup against an elected president. And such is the intensity to make this subversion of democracy succeed, the US political and media have whipped themselves into a collective frenzy of Russophobia, paranoia, and schizophrenia.

This week the frenzy peaked with claims that Trump has “loose lips in front of his Russian handlers.”

What has it come to when Russia is now in a position to offer the Americans a red pill for sanity?

But evidently, Washington is balking and wants to take the blue pill instead.

Go on Trump and Putin, publish the Oval Office transcript, and let’s snap out of this dangerous mind-game eroding democracy and international relations.