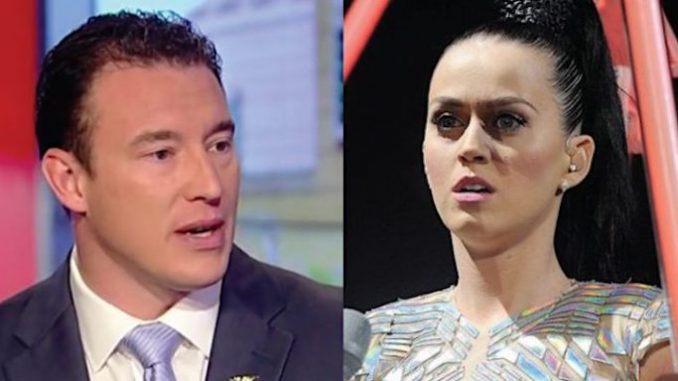 A former Navy SEAL has slammed popstar Katy Perry for her apparent support of ISIS – telling the pop princess to “go to hell” with her dumb open border policies.

In an interview on the Conservative Tribune podcast, Carl Higbie said that Katy’s recent rant where she dismissed the threat of Islamic terrorism and urged open border policies around the globe, was dangerous.

Conservativetribune.com reports: In the interview, Higbie also compared entertainers to an Xbox, saying they should be “totally silent and off until I want it to entertain me.”

Higbie was referring to a Tuesday interview in which Perry said the lesson we should take from the Manchester terror attack is “that the greatest thing we can do is just unite and love on each other and like, no barriers, no borders, like we all need to just co-exist,” according to The Daily Wire.

“You’ve got this pop culture now that believes, you know — these are people who live in a bubble protected by guns with gates on their house, and they want open borders and, you know, to love,” Higbie said, mocking the “coexist” sentiment of the Hollywood left.

“And you know, I told Katy Perry to go to hell,” Higbie said, referencing his appearance on Fox News. “Pop culture, it’s very irresponsible for them, with their millions of followers of sub-18-year-old children to go out and say certain things about topics they know nothing about, ’cause these kids take it as gospel.”

You can listen to the interview here:

While I tend to be more of a PlayStation guy myself, the rest of the comment was totally on. Perry is not an expert on terrorism — or religion, or borders, or even coexistence for that matter. If you don’t believe me on that last one, just ask Russell Brand.

I’m not going to add an album from any member of Congress to my Spotify library, no matter how much they think they can sing. Why would I trust a singer to bequeath upon us their political knowledge — especially when it’s as intellectually vacant as Perry’s take?