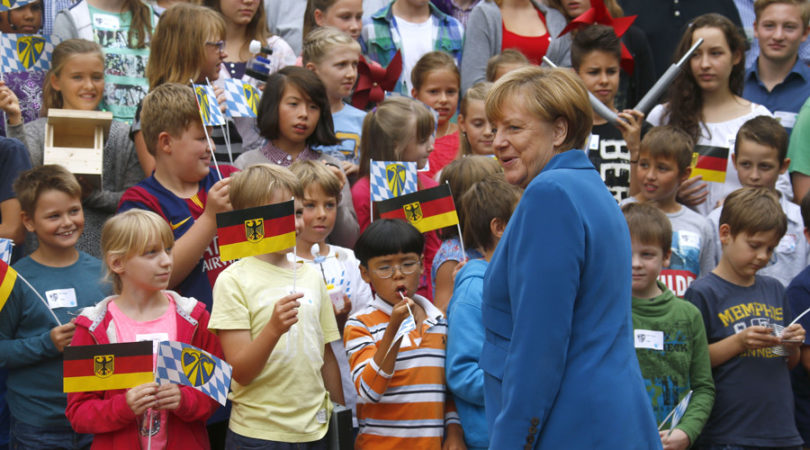 What do Macron, May, and Merkel have in common, apart from their neatly alliterative names and being leaders of Europe’s largest nations? They have no children. They are by no means exceptional, however, in this respect. Many European political leaders are childless.

Is it pure coincidence that these top European leaders are involuntarily childless? Possibly, but not very likely. In fact, they are a reflection of Europe and that continent’s lack of will to reproduce and place the family at the center, literally as well as culturally. This disturbing trend threatens to bring down Europe.

The other characteristic shared by childless leaders is their multicultural, globalist policies, replete with open borders, mass immigration, and the traditional family – at least that of Europeans – fragmented into atoms and replaced by an individualistic lifestyle. Families are increasingly becoming a pragmatic construction based on individual whim and preference.

In 2014, Statistics Denmark drafted a report distinguishing no less than 37 different types of families.

Europe’s leaders are undiluted products of a dominant feminist culture. For example, many of French citizens who cast their vote for Emmanuel Macron in the recent French presidential election were women. Before the election, 62 percent of female voters said they would back Macron. This is typical of the foot soldiers of the 1960 and 1970s women’s liberation movement. They like Macron’s feminism. The defining characteristics of feminism are not femininity and fertility, but barrenness and infertility.

The problem is not limited to European society.

A recent survey conducted by the Pew Research Center shows that the number of young men in the US who want to marry has dropped to the lowest level ever recorded. American author Suzanne Venker claims the pervasive cultural influence of feminism is the cause. Venker states that men explain their lack of desire to marry with the observation that “women are no longer women” and for this reason, men don’t feel like having a family with many kids. This attitude from males is part of the reason so many women are childless in this generation.

The feminist ideology views childbearing and children as an obstacle to self-realization. This is why they fought for abortion on demand, and with the contraceptive pill introduced at the same time, this was something easily attainable. Men have obviously adopted the same attitude.

Women who, like myself, grew up in the 1970s were brainwashed with the necessity to be independent of any man, and that abortion was every bit as natural as giving birth, if not more so. Feminism was largely successful in severing sex from reproduction. This was considered progressive, a step forward that liberated women from caring for their children, so they could join the labor market and realize themselves.

Feminism, however, now threatens to put an end to Europe. Birth rates are so low in most European countries that populations no longer reproduce.

Chancellor Angela Merkel’s childlessness reflects German society in general. European statistics reveal that one-third of German women have not borne even a single child, while the figure is fully 40 percent of female university graduates. German Minister of Defense Ursula von der Leyen observed that unless the birth rate rises, the country will have to “turn the lights out.”

A recent study by the Institut National D’études Démographiques reports that a quarter of European women born in the 1970s are likely to remain childless. One-ninth of women born in England in 1940 were childless at the age of 45. The figure for those born in 1967 was one-fifth.

Europe has been committing protracted demographic suicide for several decades, and politicians have done precisely nothing to turn this tide of doom and encourage women to have children – and conspicuously less for easing the crushing strain on the traditional family with children. Many couples can’t even afford to raise more than one or two children due to high taxation. But the main reason for the demographic suicide is obviously that being childless is being free of care, burdens and problems, as reflected in the title of an EU-funded research report entitled, ”No Kids, No Problem!”

Additional research reveals how “personal and cultural factors shape attitudes toward voluntary childlessness in Europe. Europeans are increasingly less likely to see childlessness as a problem.”

It is somewhat alarming that an entire culture shows no concern for the reproduction of itself, just like Europe’s leaders, who seem blithely unconcerned at the prospect of being representatives of the final generation. The question is the degree to which blissful infertility affects their policies. This is a highly relevant question that we or the next generation must without a doubt be compelled to raise.

The world’s childless leaders, those idols of globalism, share the trait that no loyalty binds them to family, nation state, culture, religion or tradition. At the same time, they are desperate about the low birth rates in Europe and their adverse impact on the economy and the welfare state. Angela Merkel has sucked in 1.5 million migrants because the demographic meltdown threatens. Perhaps some of her generosity somehow springs from her unfulfilled maternal instinct. Immigrants do not call her “Mutti Merkel” for nothing

Perhaps childless political leaders live out their need for exercising parental responsibility and self-sacrifice by inviting in migrants as a kind of adopted children. However, they completely disregard the fundamental and irreversible impact this will have on European culture. Meanwhile, the patronizing, selfish and individualist mindset once more inflicts itself on populations too cowed and misguided to stand up against the tide of doom engulfing them.

Parenthood teaches men and women alike to set aside themselves and make a sacrifice for another human being. This role is not part of the life experience of many European leaders. Neither have they any on whom to bequeath their culture. They act as individuals, on the basis of immediate benefit. Self-realization and a successful career seem much more important than passing on a bequest of life, building a family and a culture. They have no sense of kinship with future generations.

Against this barren and infertile Western culture stands Islamic culture, which places emphasis on family and having many children. Muslim women take pride in saving their virginity until marriage in which they foster many children. Turkish President Recep Erdogan recently called for all Turks residing in Europe to have five children each. This will make the future of Europe yours, he declared.

An imam, whose name I don’t recall, added at a dialogue meeting with priests: “You have democracy, but we have demography.” Islamists need not launch a military attack on Europe or use terrorism, because a couple of decades from now they will reign by the womb, by demographic proliferation, so to speak.

The infertility of European leaders is now reflected in self-destructive policies, globalism and mass immigration, instead of policies that promote children and families. Taxes and economic policy have been deliberately shaped to make it virtually impossible for any European household to manage on one income.

But haven’t many childless individuals done much to benefit others over the centuries? Certainly, they have, but self-imposed childlessness – as described by the EU report – is a symptom of a feeble and terminally ill culture. Mass culture has promoted the view that limiting child birth through birth control and abortion represents a higher stage of cultural development. Today, the the destructive impact of that idea on culture is obvious. Our own politicians wield the knife used for this cultural slaughter. We no longer have children, families, religion, nor even genders, as ‘gender-neutrality’ is being diligently promoted in European culture. This is a complete change from traditional Western values that have kept Europe safe from outside invasion for centuries.

The sclerotic condition of our culture is much more of a threat than external enemies. One brick in the wall of problems we face is the spiritual poverty that insists that human life has no value in itself, that it is not a gift, and that we should not bring children into this cold, hostile world. These are nihilist notions. Such thoughts do not absorb other groups who have a living and vibrant cultural and religious life. They view life as positive and their traditions as a valuable gift worth passing on to the next generations.

The decline and fall of Rome has been explained by its decadent and ‘bachelor culture,’ much like what afflicts us in northern Europe. It is important that those who want to keep Western civilization alive do not amputate its roots and then think that it can still survive. Or should survive.