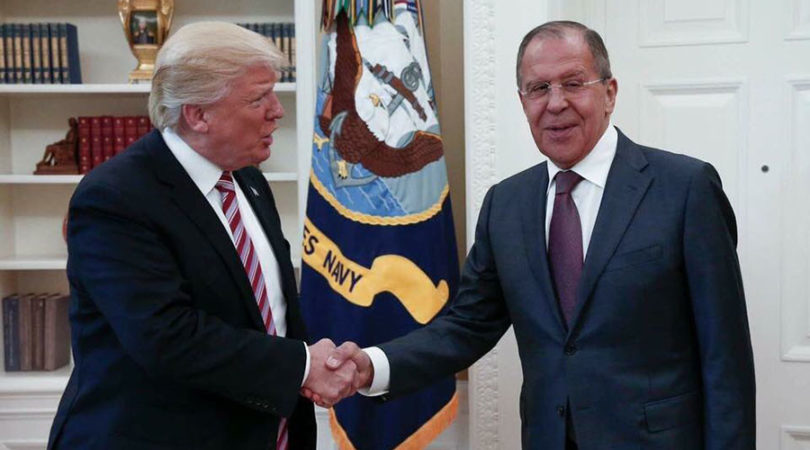 Russian Foreign Minister Sergey Lavrov said Russia and the US should seek ways to solve international problems together, despite any difficulties in relations, following a meeting with US President Donald Trump.

“First of all, we have discussed our cooperation on the international stage. It’s been confirmed that despite all the difficulties, our countries can and must act together to help solve key problems on today’s international agenda,” Lavrov said at a press conference at the Russian embassy in Washington, following a meeting with President Trump.

Lavrov: our talks now are free of ideology, as they were in Obama's era, but we talk business now. How to solve world issues together

The US and Russia will continue working together on various issues, including the conflicts in Syria and Ukraine, Lavrov noted, adding they aim to remove all barriers hindering efficient cooperation.

Meetings between deputies of Lavrov and US Secretary of State Rex Tillerson will continue in order to tackle “those irritants that have been artificially planted into our relations,” the Russian foreign minister said.

“We have thoroughly discussed Syria, including those ideas about creating de-escalation zones. We have a shared understanding that this must be a step made jointly to put an end to violence in Syria,” Lavrov said.

US officials are harming their own people by saying that Russia might have influenced the elections and is standing behind US internal affairs, Lavrov also said.

“I think this is even humiliating for American people to hear that US internal affairs are being governed by Russia. How can it be that such a great nation is thinking in this way?” Lavrov said.

However, reporters apparently would not let the issue lie, repeating the same question several times. Lavrov was compelled to repeat that there has been no solid evidence of any meddling.

After being asked about the issue for a fourth time, Lavrov looked somewhat annoyed as he replied that he had “already answered.”

Lavrov gets FOURTH question on alleged meddling and seems quite irritated. "I've already answered it"

Anti-Russian sanctions were not among the topics discussed with Trump either, Lavrov said.

“We didn’t discuss the sanctions. This is not our problem. This is a unilateral act that has been done against us,” he said.

When asked about the situation in Afghanistan, Lavrov denied accusations that Russia is providing Taliban militants with weapons.

“We spoke about this a lot – give us one piece of proof,” Lavrov said. “There are no serious experts on Afghanistan, those who are not trying to gain cheap popularity, who would say that we are helping the Taliban.”

Lavrov was also again asked about the dismissal of FBI Director James Comey, this time whether his meeting with Trump came as a consequence of the agency chief’s departure.

“Are you kidding?” Lavrov replied.

Lavrov: i feel bemused that you – serious people – are asking me these questions and im forced to answer them (re: Russia allegations)

Lavrov had already responded to a question about Comey’s dismissal earlier in the day, before a meeting with US Secretary of State Tillerson. On that occasion he feigned surprise at the news.